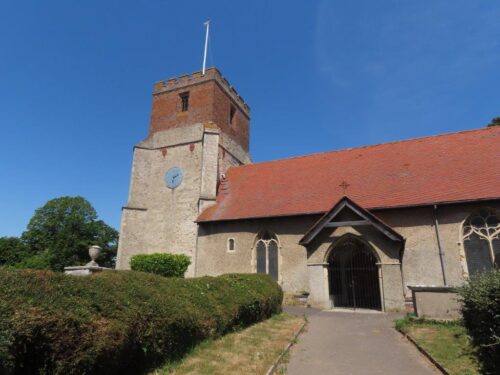 It was our great pleasure recently to visit All Saints Church, Dovercourt, and witness the abundant evidence of beneficial management of the churchyard, with very limited grass cutting and a lack of signs of herbicide use. Such a contrast to most municipal grasslands, such as the nearby cemetery, where it seems mowing was an essential mid-lockdown, mid-drought activity, and is now brown and scalped, shorn of any flowers to feed the insects and sooth our senses.

In the churchyard, the grassland was thriving , longer grass being more tolerant of drought, and blooming: Ox-eye Daisies are the particular highlight of early June, but with a whole host of further courses to come in the insect restaurant as the summer progresses. 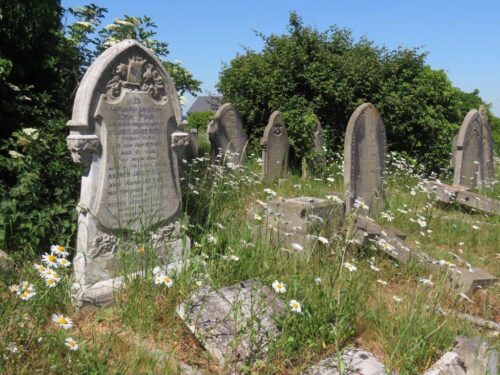 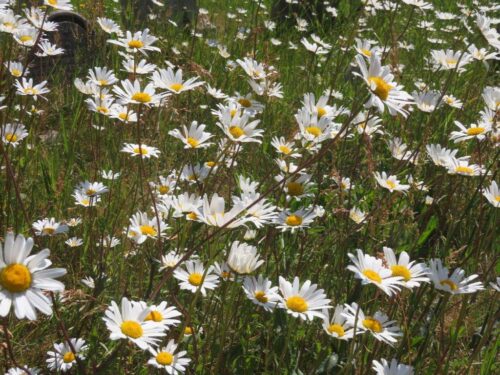 And as expected it was simply teeming with insects of all kinds: showy butterflies (Holly Blue and Small Tortoiseshell); the Narcissus Fly (a large bumblebee-lookalike hoverfly);  beetles galore, including the metallic green Thick-thighed Beetle and the tiny 16-spot Ladybird; and (appropriately, given the location) the Bishop’s Mitre Bug. 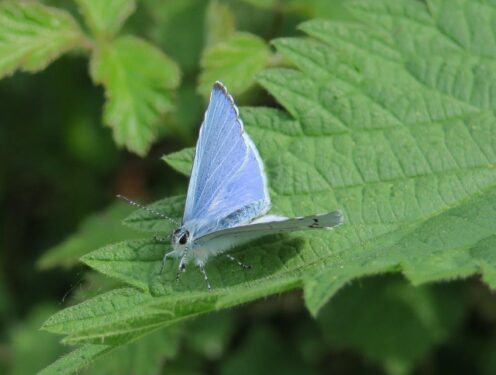 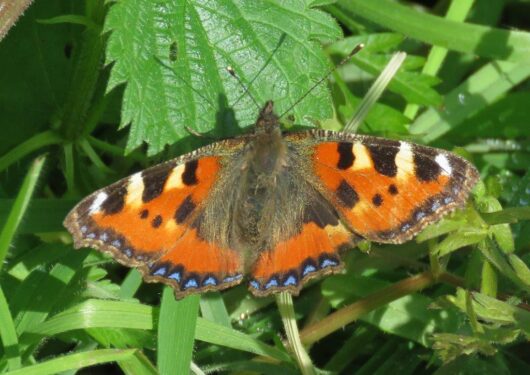 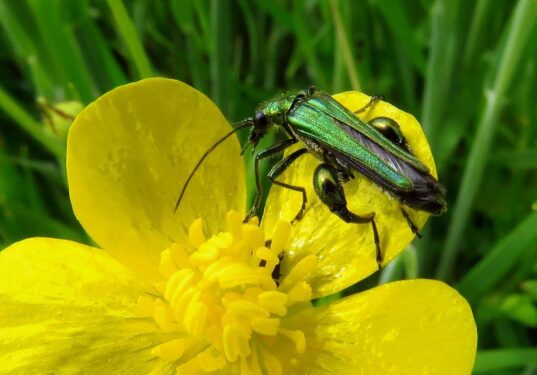 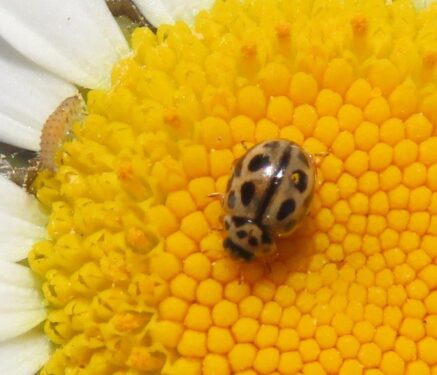 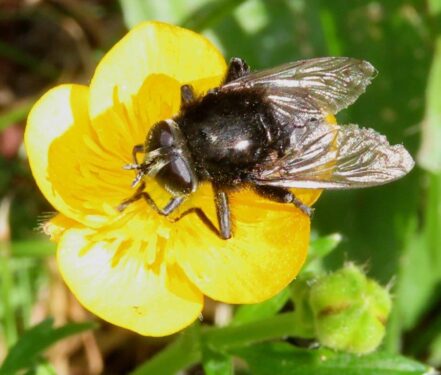 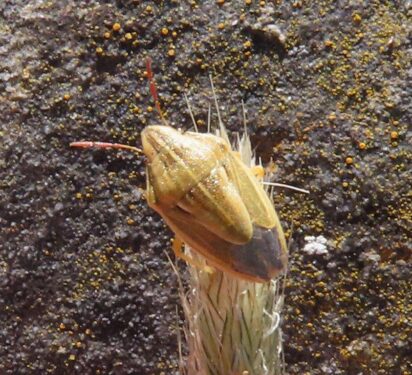 Lines of splendid Lime trees around the churchyard brought their own specific wildlife, including the smartly patterned Lime Aphid, and reddish leaf growths (galls) caused by a microscopic mite… 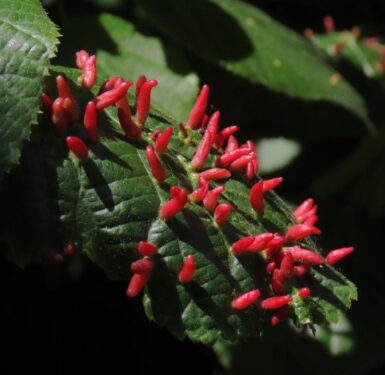 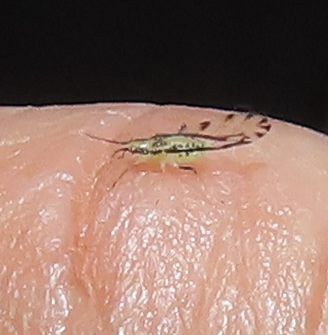 …but the best prize of all, and the reason for our visit, was a thriving population of Firebugs, a red-and-black bug which is also associated with Limes. A week ago when we showed our daughter, who lives close to the church, the photo of an Ornate Shield-bug we discovered in Wivenhoe, also red-and-black, never previously seen in Essex , she thought she had seen it in the churchyard. But when we saw a picture of hers we recognised it immediately as Firebug, a familiar species to us from our travels on the Continent, also never seen before in Essex, and rare in the country as a whole. 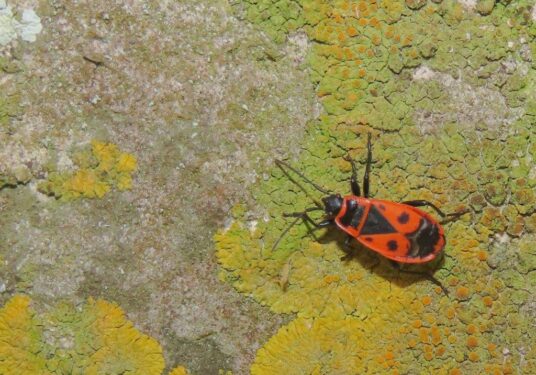 In the UK, Firebugs have been known since at least 1865 from one islet off Devon. But apart from an occasional transient population, especially on the far south coast,  that’s it, until the past couple of years when vagrant individuals have been noted more widely, including in 2019 in Orford and Ipswich in Suffolk. How it gets around is unknown as it is flightless, but it is perhaps no coincidence that many locations are close to ports. Are Firebugs found all the way between Harwich International Port and the church, or perhaps a newly-disembarked vehicle with an insect stowaway parked outside the churchyard to visit the shops? 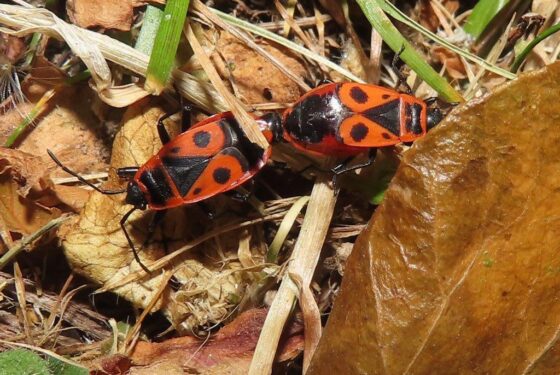 The red-and-black colour scheme is what is termed ‘warning coloration’, not that it is in any way dangerous to us – it is simply advertising to potential predators that it is distasteful. Neither is it harmful to garden plants or crops: it eats the seeds of Lime trees, one reason why the churchyard suits it. And interestingly, also the seeds of Mallows: botanists have only just realised through DNA sequencing that the very different-looking limes and mallows are closely related , but its seems the bug has known all along! 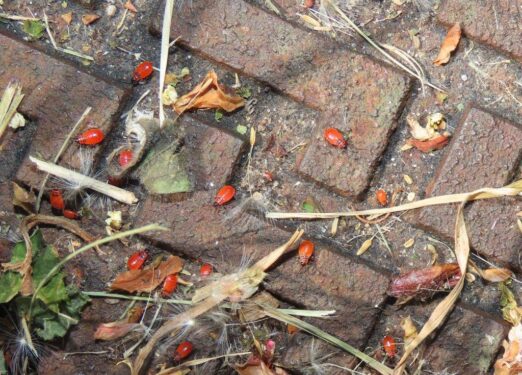 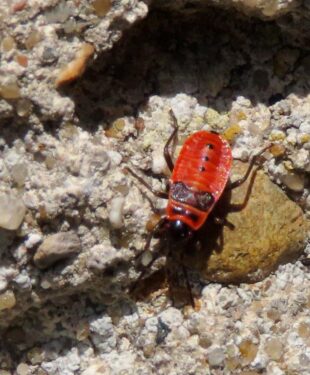 And suit it it certainly seems to. We searched most of the churchyard, ably assisted by granddaughter Eleanor (2 and a half, and very sharp eyed) – “Look, Papa, ladybird…”! Firebugs were found almost throughout, but most numerously closer to the church and its Lime trees, both adults and aggregations of immature stages (nymphs), including many paired individuals (an activity which can extend continuously for a week) making the next generation. 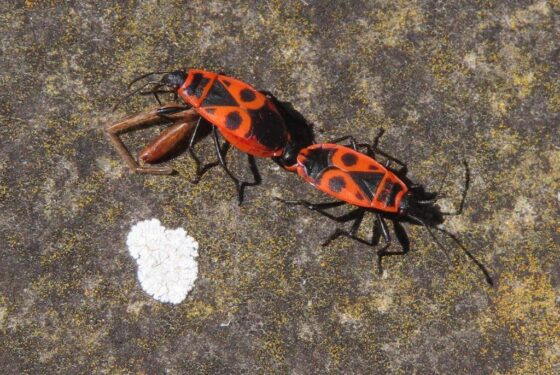 As an insect of warmer climes, this colonisation may of course prove to be only temporary. A hard winter could easily spell the end for them. But until then, let’s welcome them and enjoy them, a bright spot of colour in the often depressing litany of declines and extinctions in our environment. As a working, living churchyard, its wildlife riches celebrating the lives of the deceased, this visit to All Saints’ churchyard could hardly have been more inspiring. 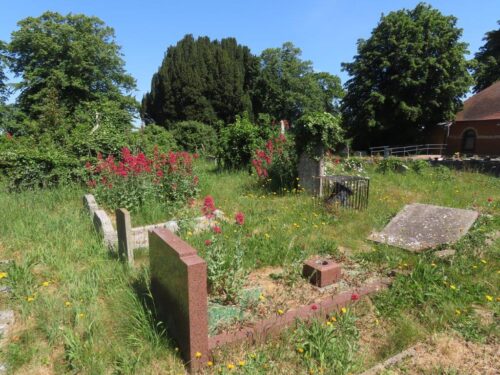