People have noticed that my blogs seem to have dried up recently. Some have even complained! Put simply, ‘retirement’ has proved to be busier than ever. But I do hope to resume posting, now that the busy wildlife tour season is over. I have several planned, but first I must say a few words about a place that surprised and excited us last week. 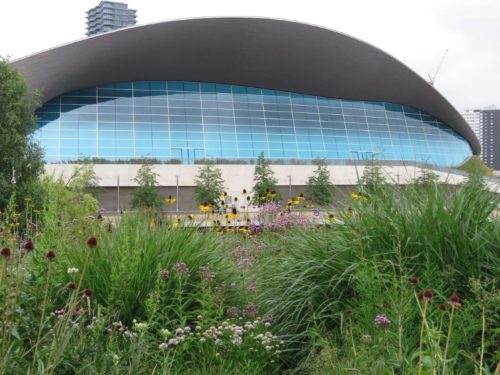 “Two day-returns to Stratford, please”. I said it quietly, hoping nobody in the queue would hear, and assume that we were heading out for a day’s shopping in Westfield, that cathedral of retail therapy. No, we were set to explore the Queen Elizabeth Olympic Park. Five years on from the Big Event, we were interested to see whether the much-talked-about green legacy had borne fruit. And we were not disappointed!

It all started well, with a cracking male Black Redstart feeding around the entrance to the park, and continued to provide wildlife excitement throughout the day, despite the breezy, often cloudy conditions. Yes, it was busy, hundreds of people enjoying themselves in formal and informal recreational activities, but the ‘green infrastructure’, within which the formal recreation facilities are embedded, more than met our expectations. Semi-naturalistic plantings of both native and non-native plants, rich in nectar and pollen sources, were so buzzing with invertebrate life especially, that we managed only to explore about half of the park in detail during the day. Most pleasing to note was the fact that the Park has not fallen into the grips of the ‘overtidying’ garden mafia, an important lesson that could usefully be learned by local authorities and gardeners across the country. 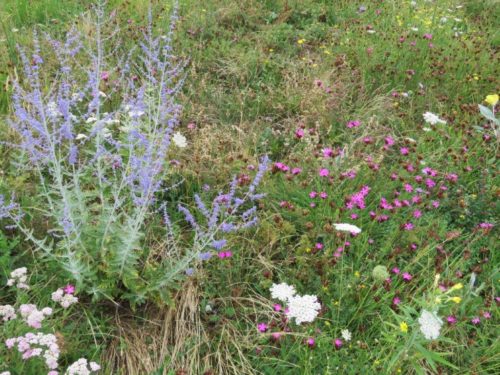 The photos below are a small example of the things we saw which excited us, and which will ensure that we return time and again. Might even be persuaded to do some shopping some time!

As usual, our attention was focussed upon the invertebrates, and while maybe we didn’t see anything too unexpected for this part of the world, the sheer volume of life, happily going about its business was a delight. Starting with the Big and Showy, a Jersey Tiger moth was especially dramatic (especially to us from north-east Essex, which has not yet seen the fruits of the Tiger’s recent range expansion), while other Lepidoptera included the chrysalis of a Small Tortoiseshell. 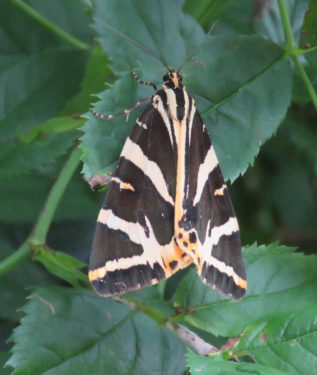 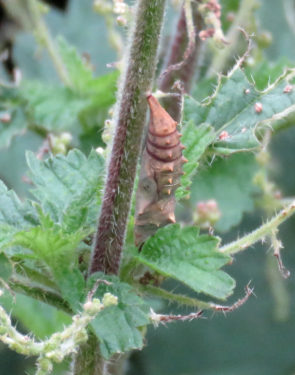 A fresh adult Blue-tailed Damselfly, and a nymph Field Grasshopper: 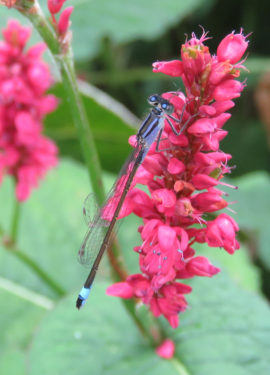 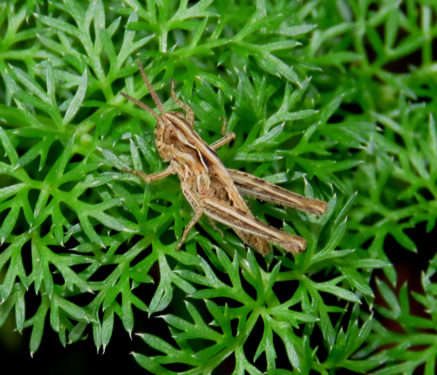 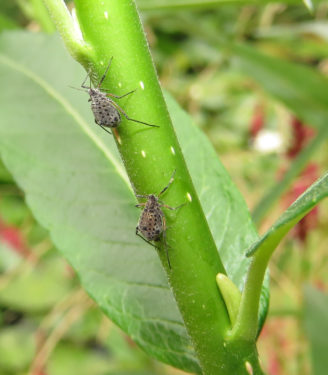 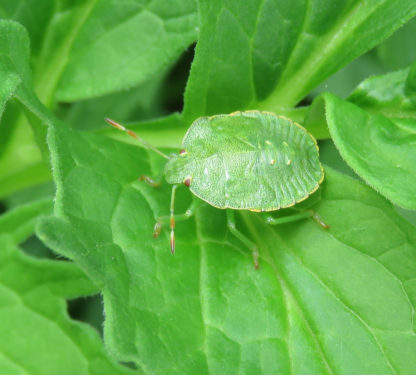 Bee-wolves Philanthus triangulum, both male and female making good use of the umbelliferous nectar sources: 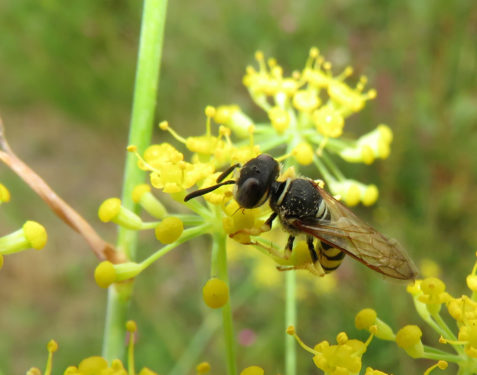 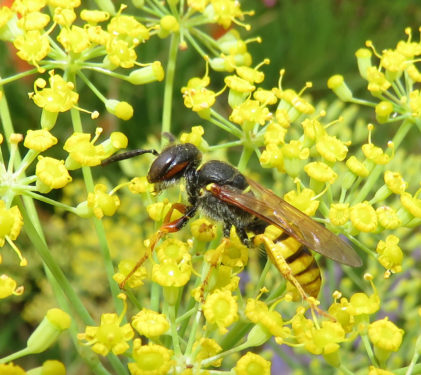 Beetles of all descriptions:  a Cryptocephalus pot-beetle, possibly C. pusillus, feeding on a rose-hip;  Brown Willow Beetle Galerucella lineola; the hairy darkling beetle Lagria hirta; and the larva of an Orange Ladybird. 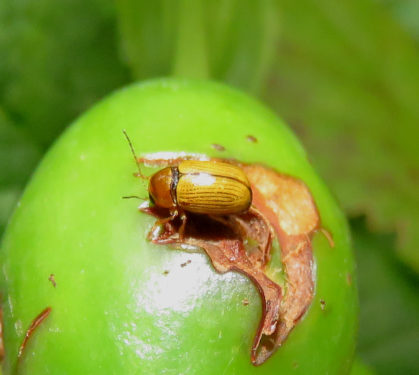 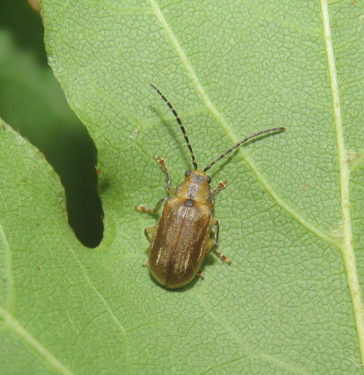 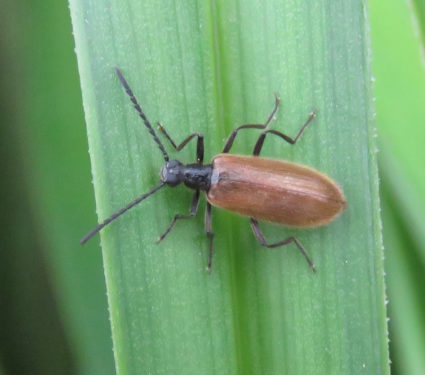 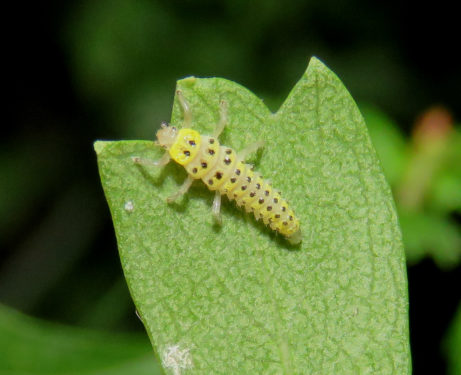 Hoverflies galore: Eristalis arbustorum; Batman Hoverfly Myathropea florea; Volucella inanis; and the giant of them all, a couple of views of the Hornet Hoverfly Volucella zonaria. 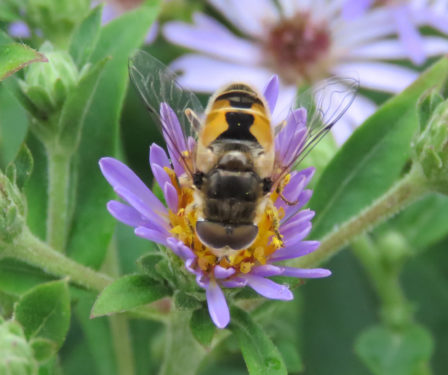 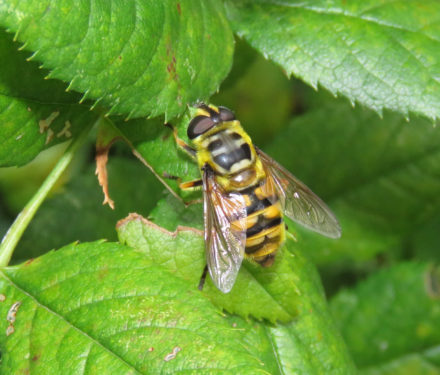 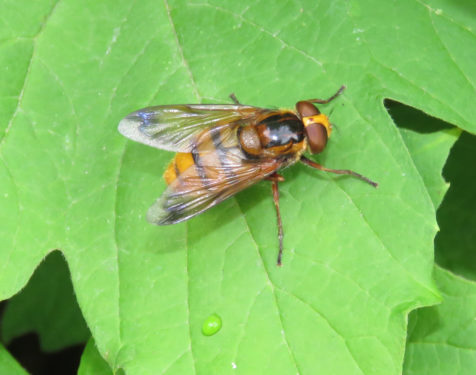 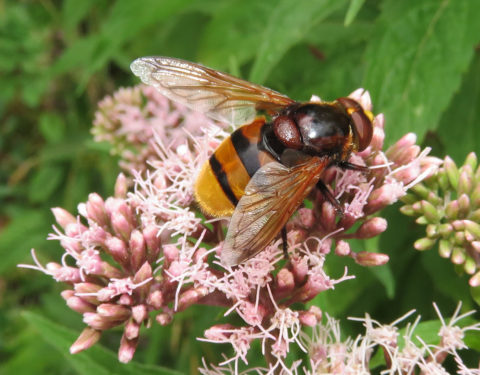 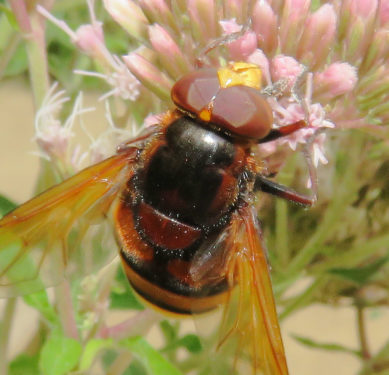 And finally, reflecting Jude’s almost microscopic close-up vision, she kept finding these tiny eggs on filaments attached to all sorts of vegetation: 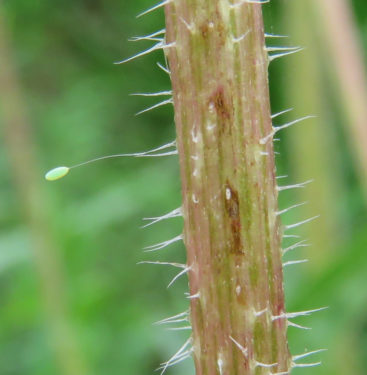 Green lacewings, we assumed, and to vindicate our assumption, here is a hugely gravid female, with the evidence right next to her… 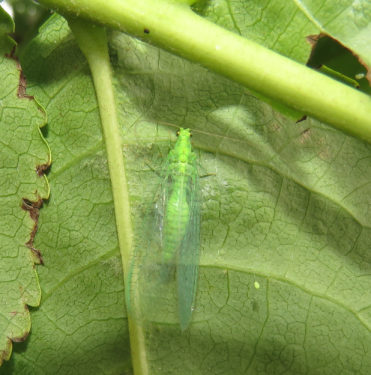