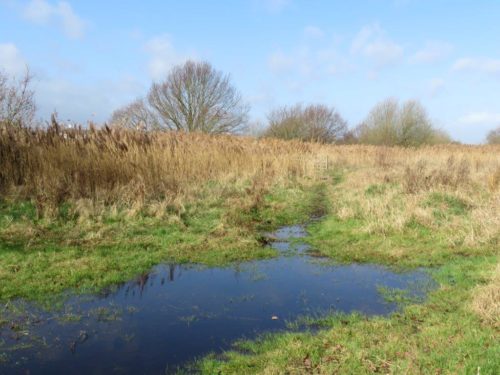 Q: What do horses’ hooves, turkey tails, yellow brains and a vinegar cup all have in common? A: All types of fungi found on our Botany & Bug walks yesterday. What evocative English names for these varied and interesting organisms and all to be found on just a short walk along Wivenhoe Trail! 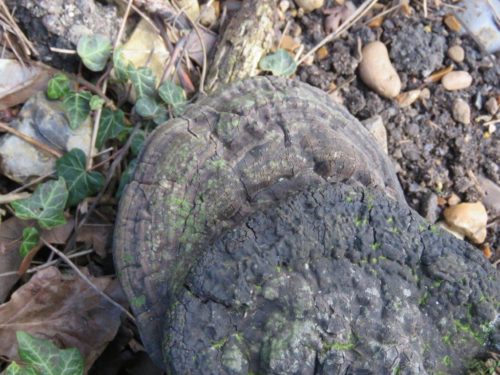 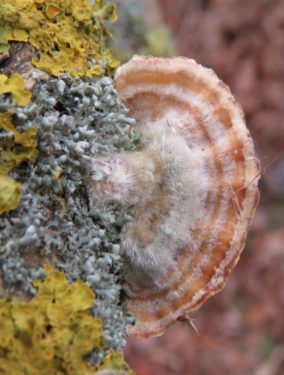 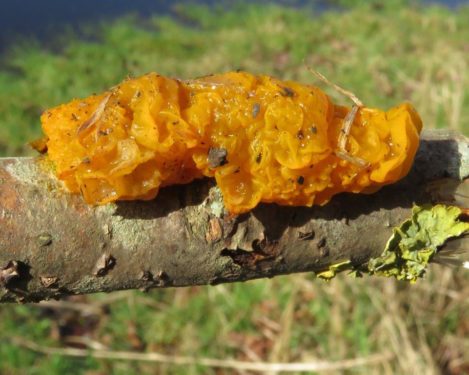 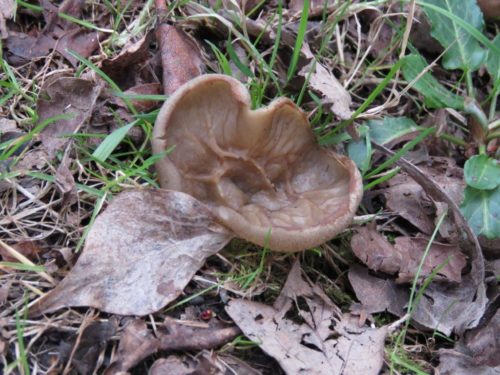 Thank you to all who braved the cold, strong winds and showers. The patches of sunshine were very welcome, not only to us, but to the few brave insects that were out on their normal Saturday business… …Hairy-footed Flower-bees nectaring at the White Dead-nettles and Seven-spotted Ladybirds basking and warming after their winter sleep. 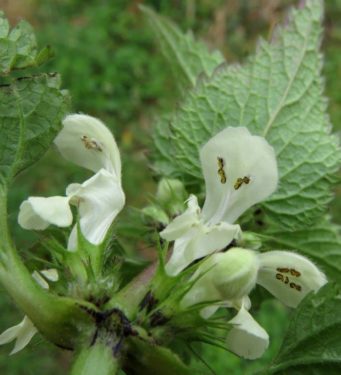 The life-cycle of some critters is pretty amazing. .. scale insects start life as little aphid-like creatures, (known as ‘crawlers ‘) who live on the undersides of leaves. Once they are fully grown they snuggle down on their favourite leaf, lose their legs, grow a shell, attach their sucking mouthparts (a feature of all ‘true bugs ‘) and stay there. Never to move again. 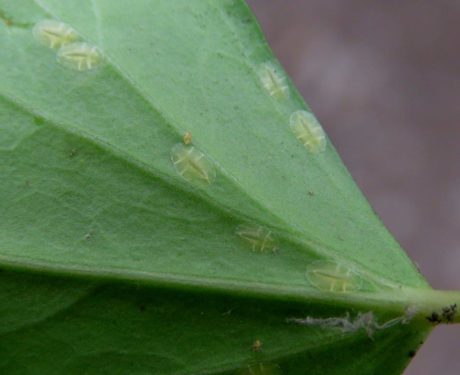 Pretty safe you may think, but one had been found by some parasite or another and wasn’t a pretty sight. When alive, these bugs secrete a honey-dew like substance which drips down to the leaves below, providing a food-base for yet more wildlife, sooty moulds.  Nothing in nature is wasted! 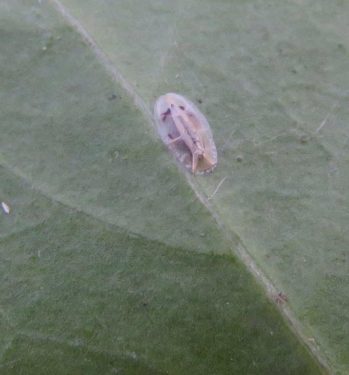 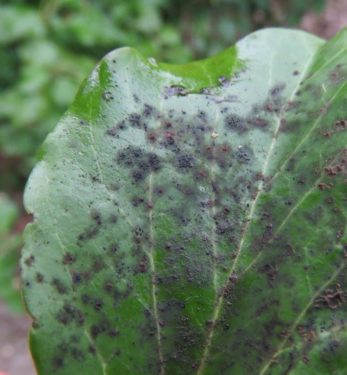 Another of nature’s oddities are bagworms. These are nothing to do with worms, but the early stages of some types of micromoth, which variously make their protective coverings out of bits and pieces they can find. A couple of species had attached themselves to fence posts etc, waiting until the time comes for them to fly away … if indeed they can – many females remain wingless all their lives and stay put in their bags. 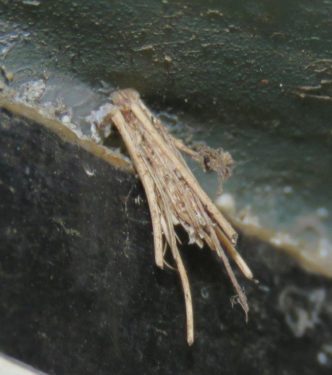 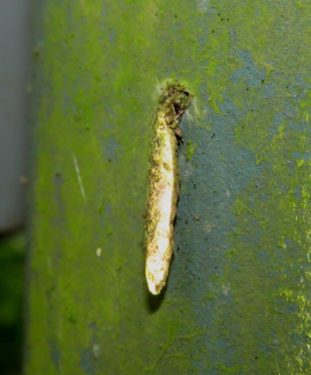 Plants are of course great indicators of the season and we were able to see a number of ‘first footers’ emerging. Whitlow-grass (not a grass), Red and White Dead-nettles (not nettles), Ivy-leaved Speedwell (not ivy), Dog’s Mercury (neither nor) but what’s in a name? These are all important sources of nectar and/or pollen for emerging bees and other important insects. Talking of names, one of the springing-green plants has more common names than any other: Arum maculatum. A well-known plant, and indicator of ancient woodland, its many monikers are connected to ‘adult themes ‘, given the phallic shape of its flower spike and the enclosing soft leaves ( you get the drift!)….Lords-and-Ladies, Soldiers-diddies and Cuckoo-pint (modesty prevents me from explaining what ‘pint’ refers to!). 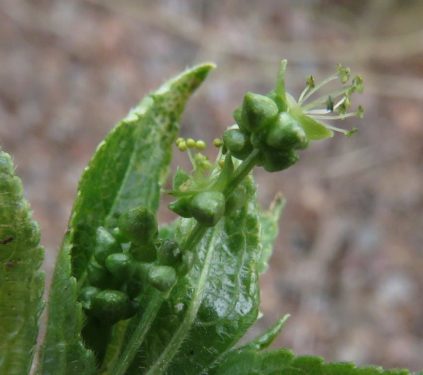 At this time of year it is easy to see the many Blackthorn bushes still in tight bud, and indeed we encountered some on our walk.  In contrast, when walking over the rail bridge in the High Street you may have seen pretty blossom which is in fact non-native Cherry-plum. Often taken incorrectly for Blackthorn, it can be distinguished by subtle differences in flower structure, earlier flowering,  and its leaves emerging at the same time, not after, the flowers. Fruits of these will be similar to the Blackthorn’s sloes, but less bitter, needing less sugar to make that all-important gin in the autumn! 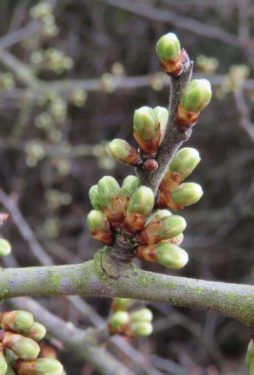 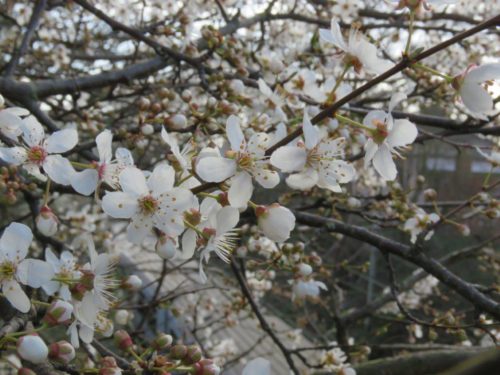 Holm Oak (like the huge specimens on KGV) are proving to be a mixed blessing it seems. Magnificent and evergreen, they are a feature of many a parkland and with the help of Jays and other birds, are dispersed and germinate readily. Again non-native, they could potentially squeeze out our own beloved species. When originally brought here, the climate was considered too cold for them to spread but of course we all know what is happening to our temperatures. Luckily, natural controls may be starting to have an effect and Holm Oaks along the trail feature the tell-tale signs of leaf-miner damage. These mines show the passages created by tiny larvae of small moths, which chomp away at the leaves, remaining between the upper and lower surfaces, until they pupate, break free and fly off. 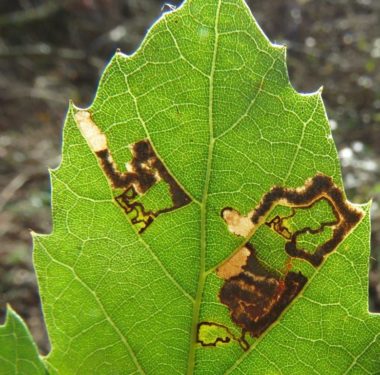 An interesting feature of some Elm trees along the trail and elsewhere is ‘corking’, i.e. corky-looking growths along branches. This phenomenon seems to affect only certain species and the causes not fully understood, but it may be the tree’s natural defence to particular stresses, e.g. salt for the trail-dwellers.  Whilst looking closely at some bark, an eagle-eyed member of our afternoon group spotted a moving red blob, a fine specimen of a Red Velvet Mite, and once our eyes were in, the sunny trunks were seen to be teeming with them. 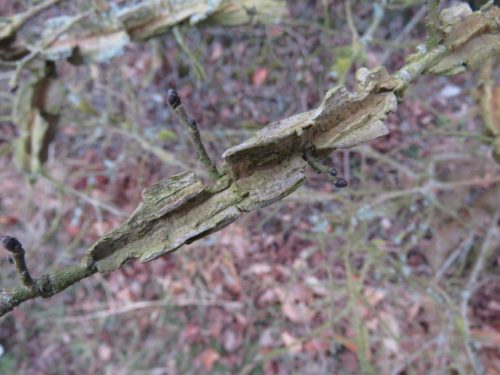 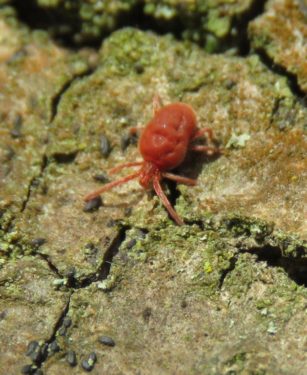 Walking so close to the town, garden ‘escapees ‘ were very much a feature. ..these are an increasing cause for concern, as some (like variegated Yellow Archangel) are more robust than their native cousins and could be pose a threat to the natural population through genetic pollution. Of course most gardeners wouldn’t dream of chucking their garden waste over the hedge into a wild area, but some do…. 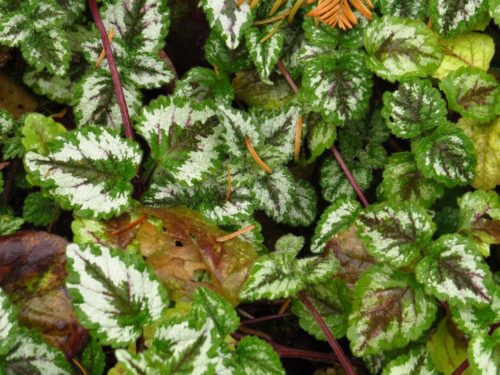