It all started with a chance meeting with a friend along West Quay…there was I, armed with my litter-picker and helpful bag-carrying husband…when she suggested I keep a ’ Rubbish Diary’, recording anything of interest that we discovered on our regular rubbish-clearing expeditions onto the marshes of Wivenhoe.

So, what did we find? A few items along the path itself, a helpful dog-walker kindly retrieving some things for us to dispose of.

And on the salt-marsh of course plastic in its many forms – bottles, lids, straws, syringe (but thankfully no needle); together with glass bottles, cans, crisp packets etc.  Many of the marshland plants had a covering of small white objects. In the same vicinity were chunks of polystyrene in various sizes, so we were concerned that the white deposit was this disintegrating, both unpleasant and potentially dangerous to wildlife.

We took some samples home and following examination with a  hand lens think that much of it is dead, bleached duckweed leaves from further up-river, together with other germinating salt-marsh seeds.  No reason to be complacent, but hopefully not such a bleak outlook as we had first thought. And at least it made us look closely at the tideline deposits, which revealed their value as a food source for seed-eating birds. 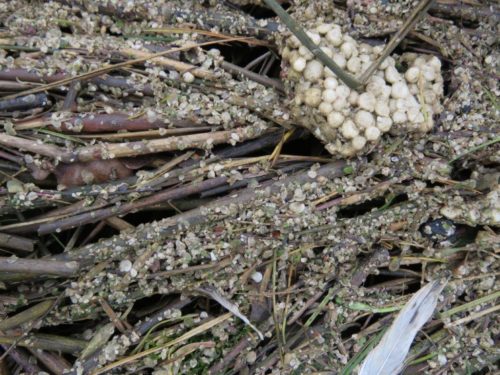 An interesting (though out of reach) discovery was a yellow rubber duck. Possibly a bath-escapee, but did you know that in 1992 28,800 bath toys were lost at sea on their way from Hong Kong to USA.  Since then they have been washed up on shores around the world, assisting the science of oceanography as they went.  Could this be one of them? 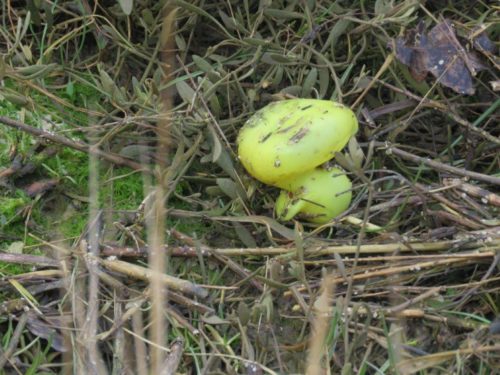