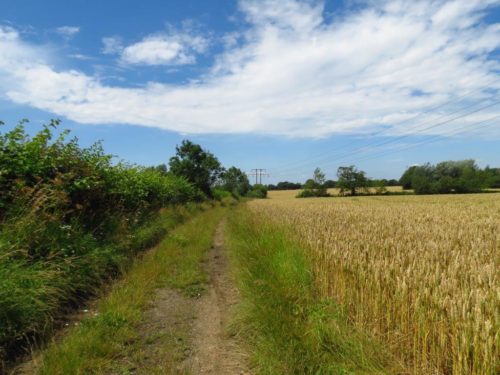 May 2012, we were undertaking a butterfly transect for the national monitoring scheme within and close to the Great Notley Country Park, near Braintree. An unexpected shower at the end of the transect caught us out, but trudging back damply along the rather unprepossessing-looking hedgerow and track between two intensive arable fields, our eyes were drawn to a mating pair of insects…. 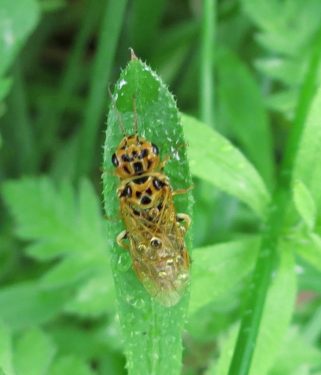 Or I should say ‘mating pair’: examining our single photo back home revealed a superb example of ‘two becoming one’, the head (even down to the eye-glint) of the ‘one on top’ actually the pattern on the lone insect’s thorax, as if its head had been cloned there with Photoshop.

But what was it? It seemed to be a sawfly, a type of wasp without a wasp-waist, but after flicking through the paltry coverage of that group in available popular field guides, we rapidly drew  a blank. The 500 or so known species of sawfly in the UK are very poorly known, as all but a few of the more easily recognisable ones are omitted from the guides. Such a collective information gap is very unfortunate, especially when you see that many also have distinctively marked and wonderfully charismatic ‘caterpillars’, or distinctive feeding signs and galls. Just a few are shown below: 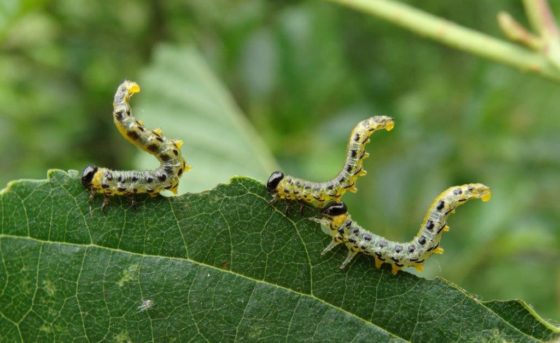 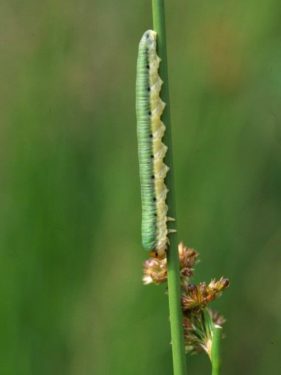 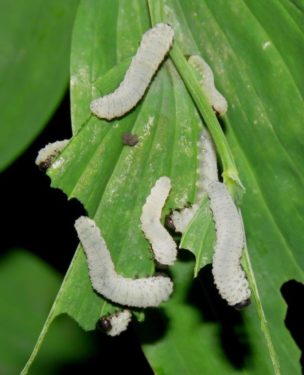 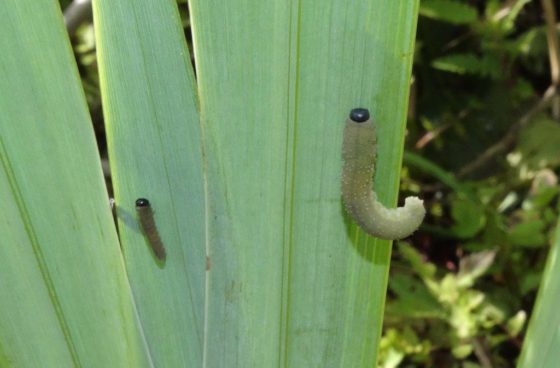 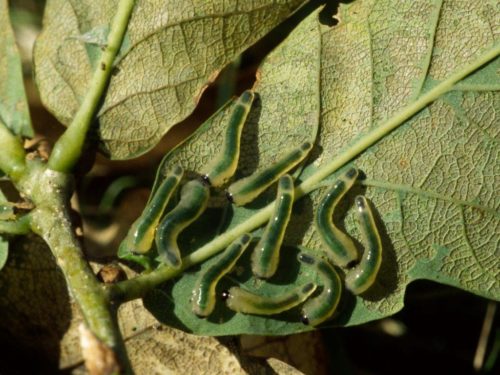 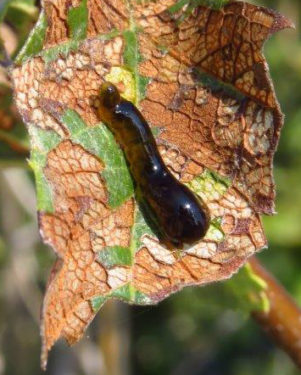 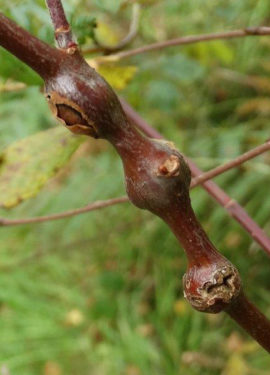 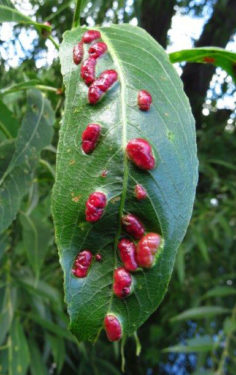 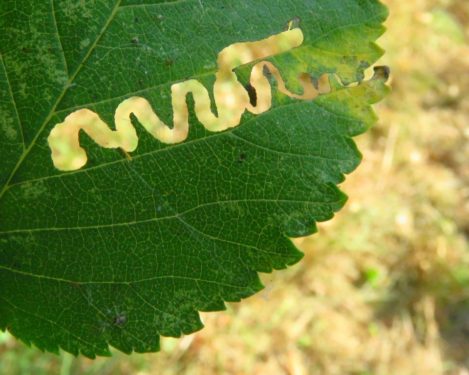 Anyway back to our ‘mating pair sawfly’. We were busy, and the photo got relegated to a pending file… until 2019 when scrolling through some of the riches of the internet, we saw something that triggered a lightbulb moment of recognition. Once we found our image, there it was – Pamphilius sylvarum. Except that is a species with records from only nine previous localities in Britain, ranging north to the Welsh borders, near Wrexham, and Sherwood Forest. The sole other Essex record came in May 2019 from Chigwell, in the Metropolitan sector of the county, courtesy of Yvonne Couch. As well as its scarcity, the habitat of ours seemed odd, given its assumed reliance on oak leaves (which its larvae roll up), perhaps in a woodland or woodland-edge context. There were several spindly hedge oaks within a few tens of metres of our specimen, but otherwise just a hedgerow and open arable. A more uninspiring location for such a rare insect is hard to imagine.

Nonetheless, we could not find much about it, nor about potential lookalikes, so I posted the picture on Twitter, and within a day, had the collective thumbs up from such experts as Steven Falk, Andy Musgrove and Andrew Green.

This episode brought to mind a similar finding from the Beth Chatto Garden, near Colchester. On one of our regular visits at the very end of October 2016, insects to photograph were few and far between, but we did find a fly sitting in a geranium flower. Once again, close examination of the photos showed it to be something different, and unknown to us. It had the appearance of a blow-fly, but with markings not unlike a hover-fly, and excitingly striped eyes, more like those of a horse-fly. 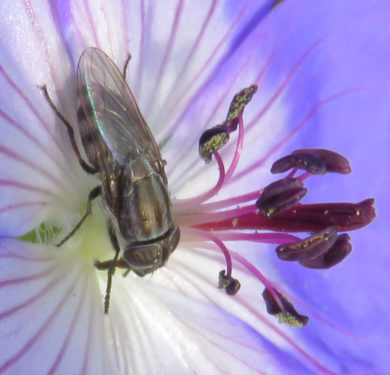 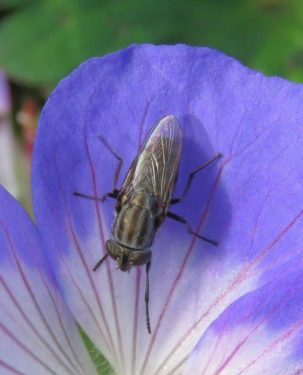 Once again scrolling through the internet came to the rescue, suggesting it was the Locust Blowfly Stomorhina lunata, an egg predator of locusts and grasshoppers, normally well to the south of the UK. Perhaps reflecting its spatially unpredictable feeding preferences, it is a known wanderer, including to the UK, albeit rarely, although seemingly increasing in recent years. In fact in the previous year there had been the largest known migratory arrival in Britain to date, one of which was in Essex at Rainham, only the second record for our county. The identity of our specimen was then confirmed by Del Smith, the fly recorder for the Essex Field Club.

Of course we cannot assume either of these rarities are actually as rare as the paucity of records might suggest. Quite likely their distribution reflects the distribution of recorders rather than the species, especially given the lack of popular illustrated insect guides which cover such oddities.

The internet and social media are much maligned, with considerable justification, but they can give access to more information about insects of all sorts than we could have imagined a few years ago, at least for those without easy access to a museum collection. But BEWARE! As noted on the British and Irish Sawflies website, ‘The internet is awash with incorrectly identified sawfly images so it is recommended to avoid identification by Google searches. The image galleries on this website and on the links below are sourced from known and trusted hymenopterists‘.

Therein lies the answers. By all means use the available picture resources to attempt an identification, but one should always give greater weight to expertly determined and curated sources. And then use social or other networks to get confirmation. If forthcoming, then importantly the records should be submitted and captured for posterity, ideally via a web portal such as iRecord. As always, there will be some species whose identity cannot be ascertained definitively from a photo. As ‘ethical naturalists’ who don’t wish to kill things in pursuit of our hobby, knowing and accepting our limitations is crucial.