This month’s Walks on the Wild Side were explorations of some of our town’s amenities, which are there on the face of it for us humans to use and benefit from.  However, thanks to now-sympathetic management from Wivenhoe Town Council, each of these is enhanced by the proliferation of wildlife that has been allowed to move in, bringing enjoyment to anyone who takes the time to stand and look. 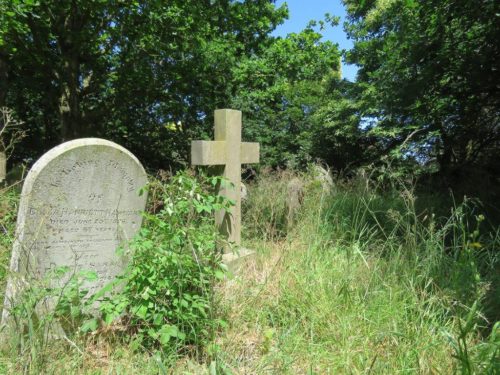 First up, the Old Cemetery in Belle Vue Road.  This ancient burial ground had for years benefitted from adherence to a Management Plan which prescribed mowing half of it in alternate years, which kept the vegetation under control whilst allowing refuges for over-wintering insects.  Until, however, a few years ago when incredibly the decision was taken to destroy the rhythm of the place and clear the lot in one fell swoop.  Bare and barren,  Mother Nature responded with vigour, and while still not properly back in rotation, in time, assuming the agreed plan is adhered to, this will return to the peaceful and beautifully untidy place that most of us love. 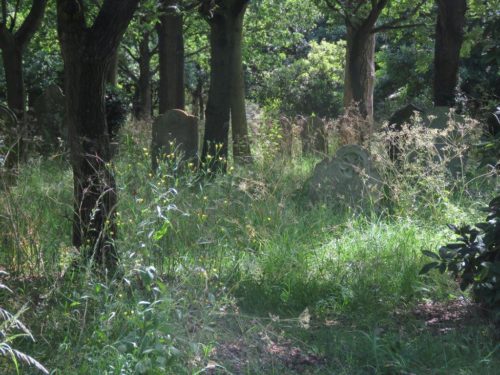 What did we see?  Well some insects are certainly more in your face than others!.  Butterflies were showing off, whizzing around in the warmth – several species of ‘Browns’ (Speckled Wood, Meadow Brown, Gatekeeper, Ringlet), plus Small White and various Skippers. 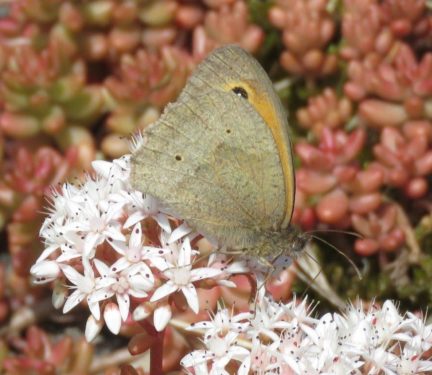 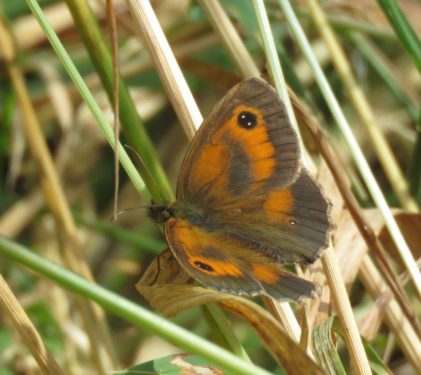 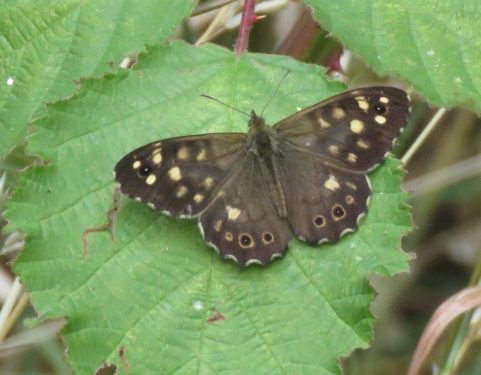 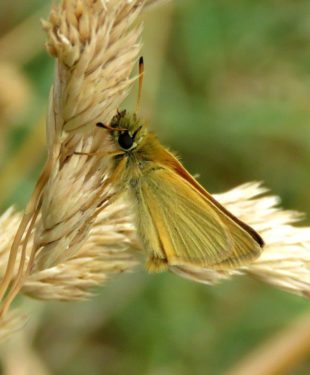 Damselflies darted about and grasshoppers and Speckled Bush-crickets hopped out of our way as we walked around.  Our old favourites the Hogweed Bonking-beetle and Thick-thighed beetle were hanging about in various poses on a multitude of flowers.  The Bramble, a plant which soon takes over if unchecked, is at this time of year a very valuable source of nectar and was veritably humming with bees and hoverflies. 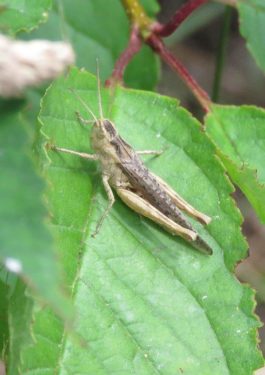 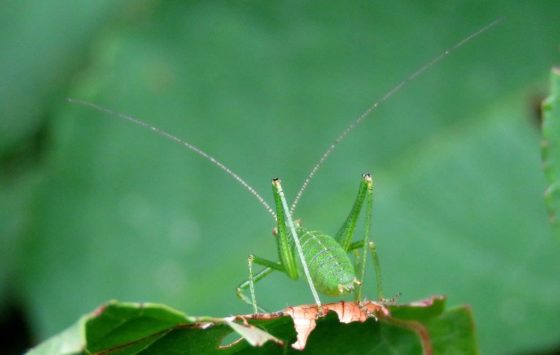 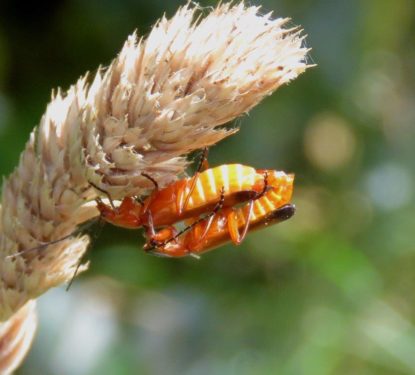 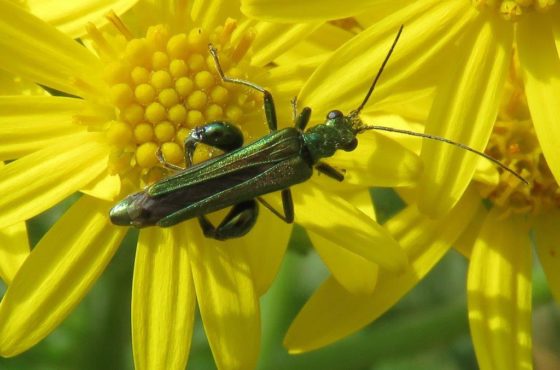 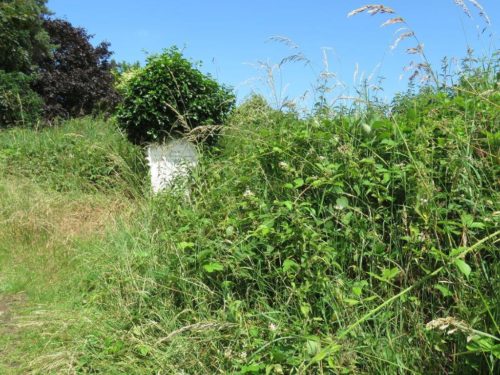 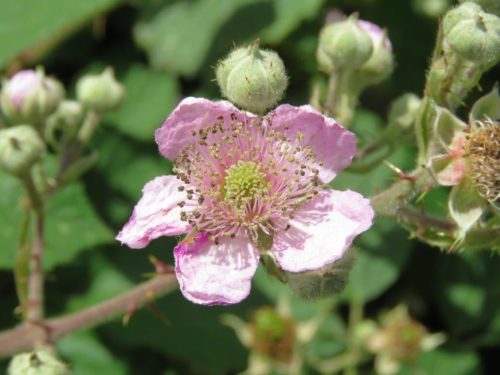 Some insects, however, are more secretive and can only be noticed by careful searching.  The weeny Virgin Bagworm moth spends its whole life in a little lichen-covered silken bag wedged into minute places –  the carvings on gravestones are ideal for their purpose. 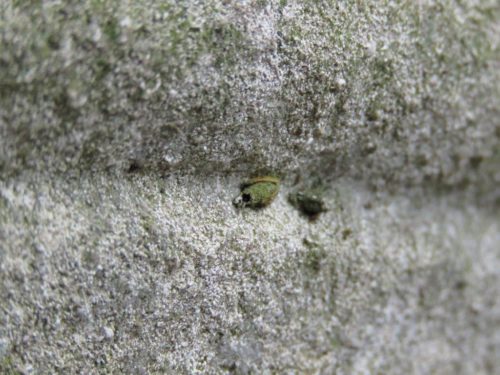 A close inspection of tree trunks revealed a number of delights – a robber-fly tucking into his crane-fly lunch, a splendid plant-hopper Allygus mixtus, a fabulous little moth Dasycera oliviella, plus rather weirdly a mayfly, normally associated with water . 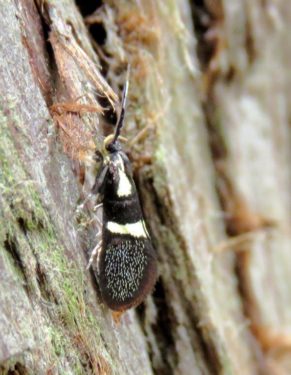 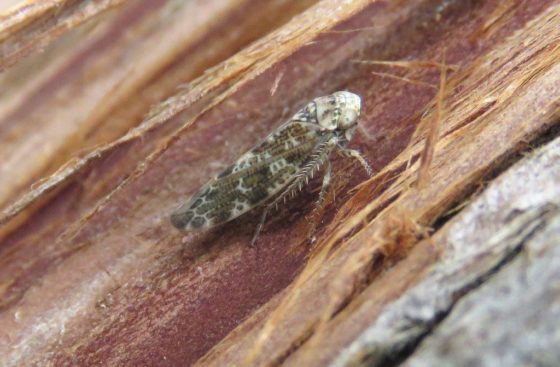 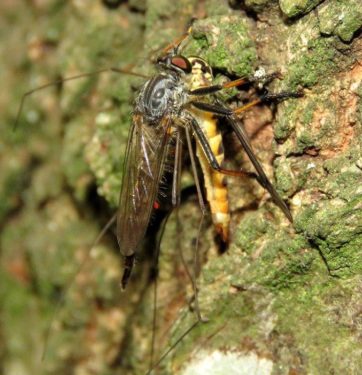 A Least Carpet moth was in full view on a nearby bush, but, by using its clever disguise as a birdpoo, was almost invisible.  We observed Mrs Nursery Web spider carefully carrying her egg sac to somewhere safe and a Great Pied Hoverfly was enjoying the sun. 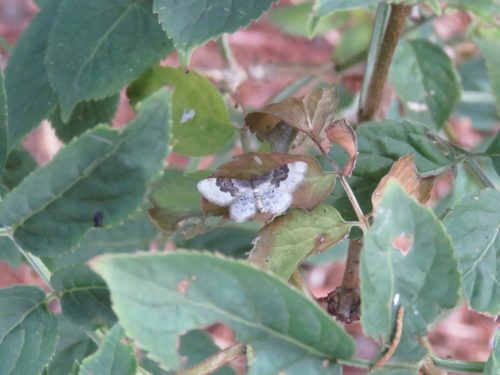 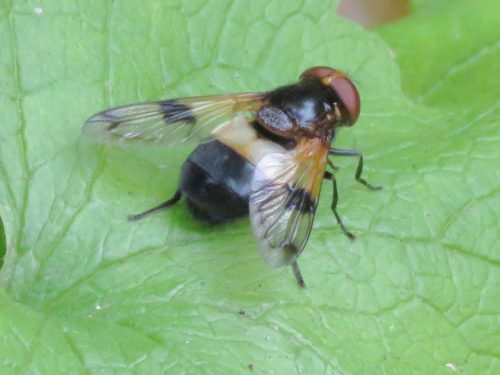 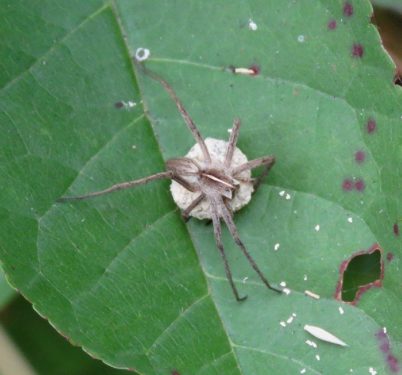 Of the plants, the prettiest flower was without doubt the tiny Scarlet Pimpernel, whilst in contrast the spectacular  Himalayan Pine with its amazing cones and long, gracefully drooping needle, was a statuesque example of the splendour of nature. 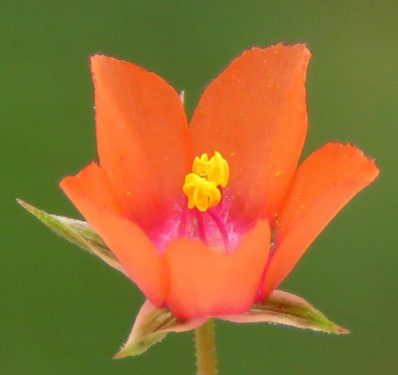 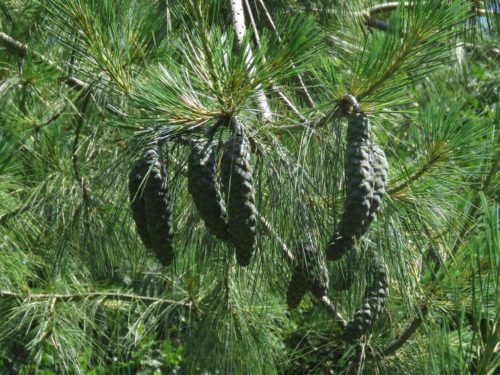 Next, over the road to the New Cemetery, where it was pleasing to see a new native hedge beginning to take shape on the boundary wall, plus patches where the grass had been allowed to grow up a bit, bringing forth a multitude of flowers with their resident butterflies and other insects. 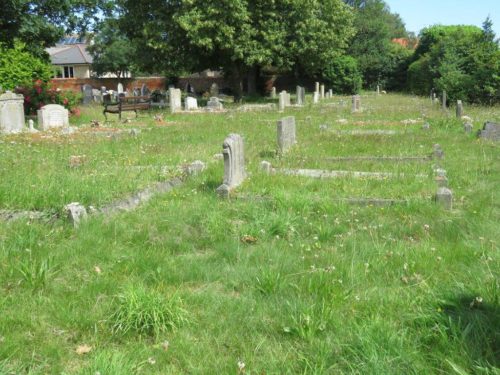 So onward to our next destination, King George’s Field and the Wildlife Garden.  The field had two interesting areas to look at.  The central ‘seam’ halfway down has this year brought forth a couple of nationally scarce clovers.  Possibly due to last year’s severe drought, the bare scorched ground allowed the seeds of these plants to take hold.  Were they already in the soil, just waiting for the conditions to be right to allow germination, or did they arrive on someone’s boot?  We will never know. 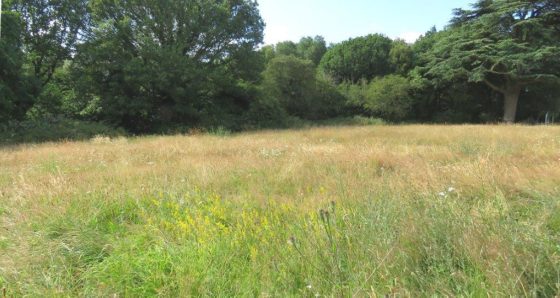 Anyone visiting the field this summer, or last year, will have noticed the patch of ‘hay-meadow’.  The many and varied plants here have all appeared by themselves,  having waited patiently to spring forth once the previously punishing mowing regime was relaxed.  Numerous grasses, Black Knapweed and Lady’s Bedstraw were all looking fine, and again we were treated to butterflies dancing in the sunshine and beetles and flies waiting to be discovered.  Who said flies are black and boring – this little grass-fly was very cute! 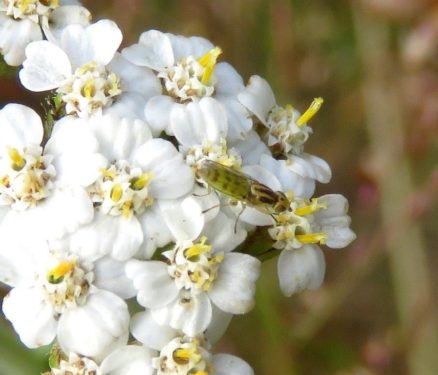 The meadow will be mown at the end of the season  and the resultant hay used to provide seeds for other wildlife areas, eg patches of St Mary’s Churchyard where a wild area is also now taking shape.

Many of you will remember ‘GardenGate’ a few years ago when the Wildlife garden, having been lovingly created by locals, was virtually ruined by overzealous mismanagement.  Fortunately the Council stepped in to try and repair their damage  – another native hedge was planted to replace the one which was ripped out, and a more relaxed regime has now been adopted.  And of course the wildlife loves it.  A Heterotoma planicornis plant bug was one of the most interesting finds there, and we were all thrilled to see a number of dragonfly exuvia on reeds in the pond.  These are the empty cases of dragonfly nymphs which they leave behind having spent their first stage of life in the water.  They then crawl out, split their skin, find somewhere to pump up their wings and turn into the aerial acrobats that we all know and love.  It all seems pretty miraculous. 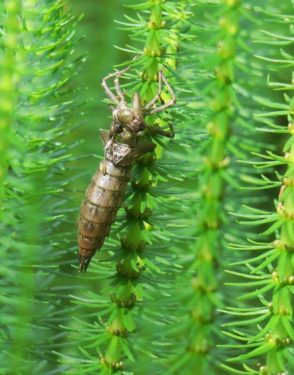 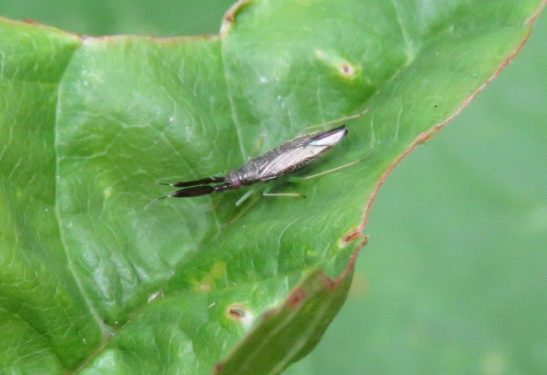 A final mention must be to our old favourite, the Stag Beetle.  We saw just the one, on the ground adjacent to the Wildlife Garden as she went about her business of the day.  Wivenhoe is an important hotspot for these amazing insects and anything we can do to assist them, such as allowing a woodpile to go undisturbed in your garden, is to be commended. 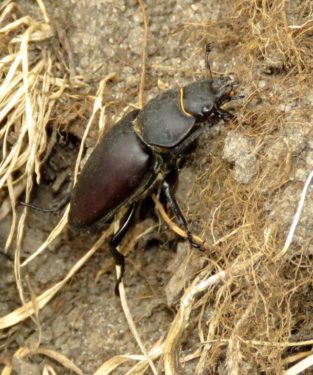 Thank you all who joined us, your observations and enthusiasm, and we hope that you enjoyed it as much as we did. If anyone feels moved to congratulate Wivenhoe Town Council on is estates management, the Town Clerk can be emailed at enquiries@wivenhoe.gov.uk.