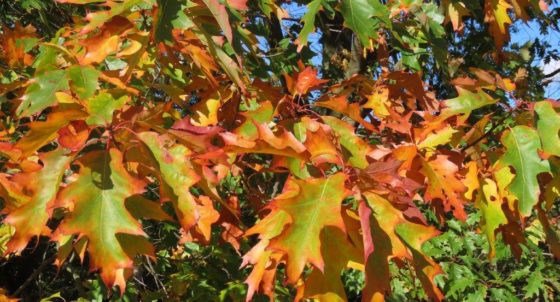 The weather forecast was not wonderful, but leading the charmed life that we often seem to do, all remained calm and dry for our foray into fungi and trees this month. We spent two very enjoyable sessions at the University of Essex campus, which despite being on our doorstep is somewhere, incredibly, we have rarely visited.

The park is impressive, comprising a landscape of native and some rather special non-native trees, most planted as features for the grounds of Wivenhoe House, a splendid structure built in the mid-18th century and now a successful hotel. The fungi did rather steal the show, though,  as we discovered a spectacular array of them at every turn (although no longer at their best following the hard frost earlier in the week).

Some particular specimens which caught our eye : 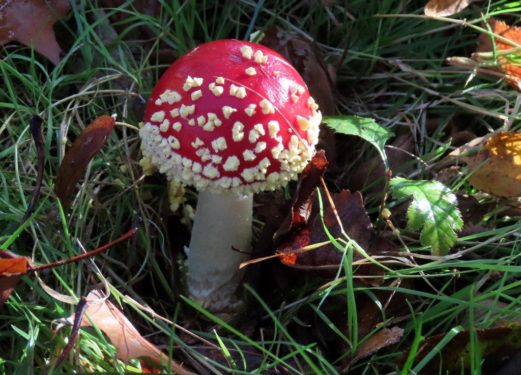 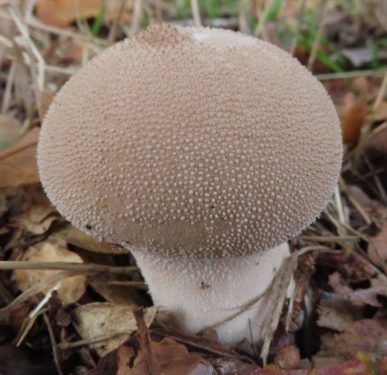 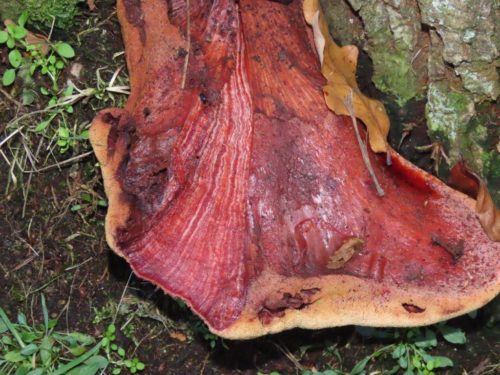 Beefsteak, so well-named, it made a few of us vegetarians feel quite queasy! 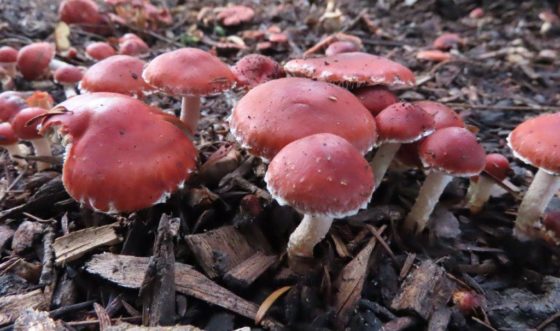 Redlead Roundheads, fairly new to UK and only found on bark chippings 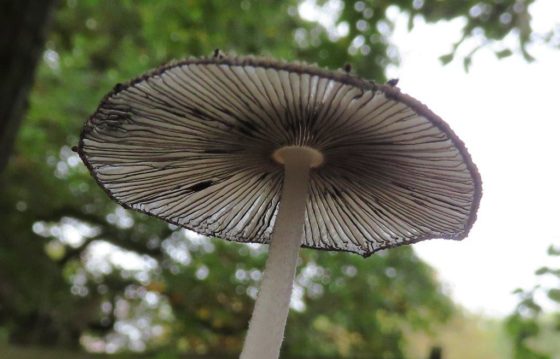 Ink-cap, the gills of which drip a black inky substance, the phenomenon known as ‘deliquescence’ 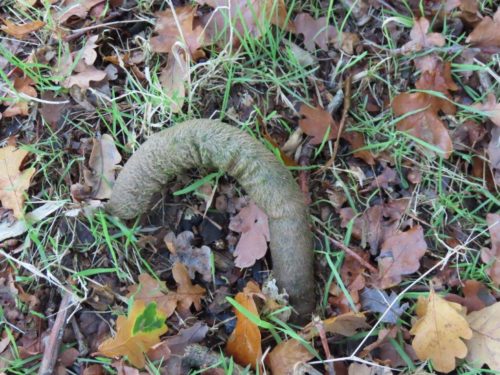 The Seamed Monkey-tail   – we thought this was a new-to-science fungus until we realised it was only the tail of a long-lost, half-buried child’s toy! 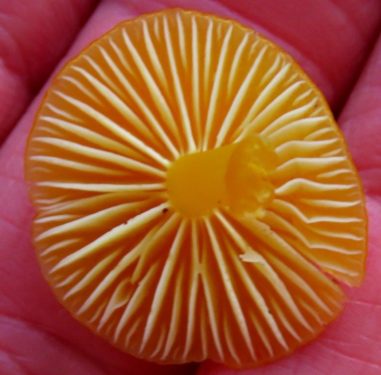 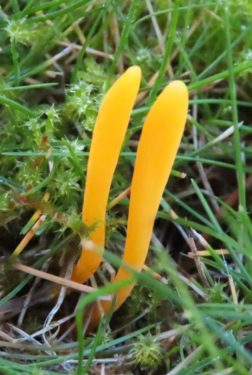 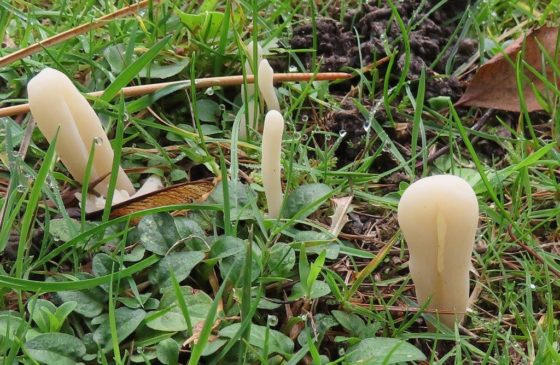 Yellow and Grey Clubs – tiny finger like structures, the Grey species being quite a rarity. 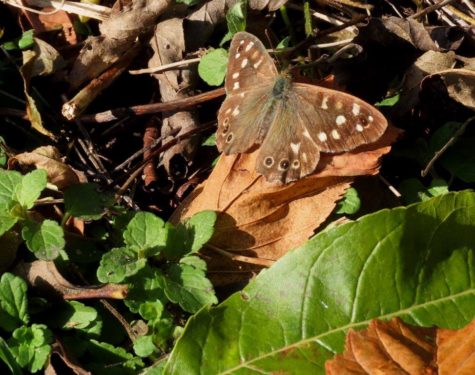 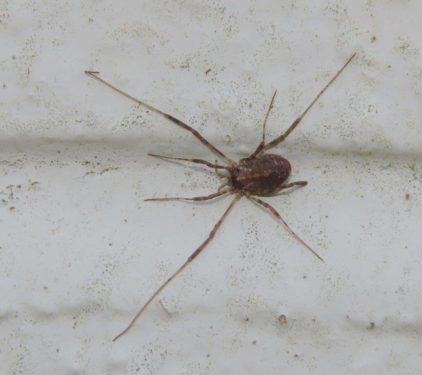 Of course, these walks are advertised as ‘Botany and Bug’ so we did try a bit of bug-hunting too and a few things did present themselves, including, perhaps surprisingly, two species of butterfly, Red Admiral and Speckled Wood, plus a Squash Bug and a few hibernating ladybirds in the odd-looking, but insect-friendly Monkey Puzzle tree. A couple of species of harvestmen and short-palped crane-fly were found basking in the weak sunshine.

But the main attraction of the day was the wonderful trees. Today’s walks were part of our series of arboreally-related winter events.  Next month is our Leaf Identification Workshop, and in January our short walk around KGV looking at winter twigs and bark, both intended to increase our knowledge of trees.  Comparison of some different barks showed that this can be a useful identifying tool for when the trees are leafless. 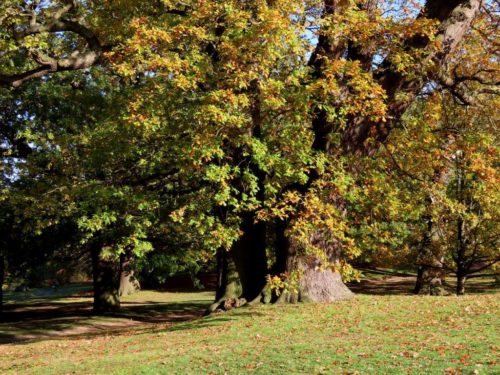 The English (or Pedunculate) Oak, is a stately and magnificent tree familiar to us all, and several superb examples were seen.  A bit of botanical nomenclature for you – ‘pedunculate’ means their flowers/acorns grow on peduncles or stalks, whilst the leaves have none and grow directly out of their twig.  (Another Oak form the ‘ Sessile’ which actually means ‘non-pedunculate’, has, yes you’ve’ got it, stalkless flowers and acorns, whilst the leaves have a stalk). 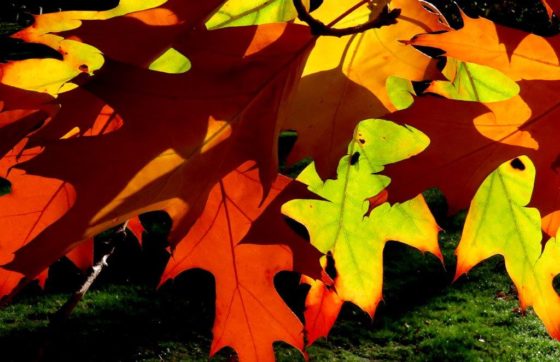 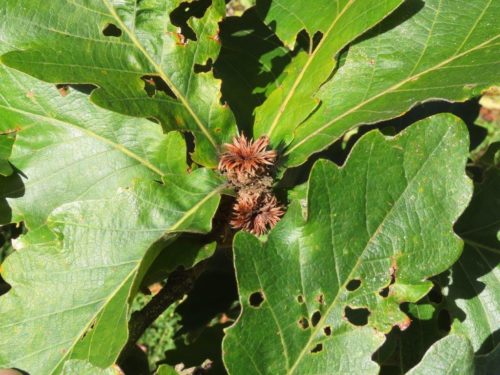 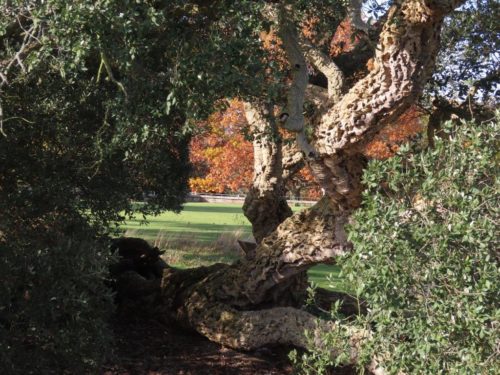 Other forms of Oak were also looking good – fantastic Red  and Scarlet species, simply stunning at this time of year before their leaves drop; the giant-leaved Daimyo Oak a non-native found only in a few places; and of course the famous Cork Oaks living near the House itself. Rumour has it that General Rebow brought these two back from the Peninsular Wars, planted up in his spare pair of wellies.  They have enjoyed their time at Wivenhoe since then and are cherished specimens in the grounds. 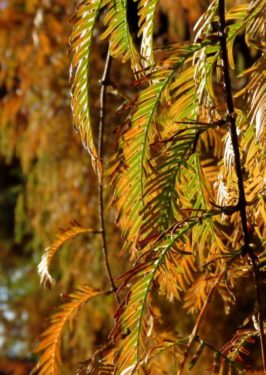 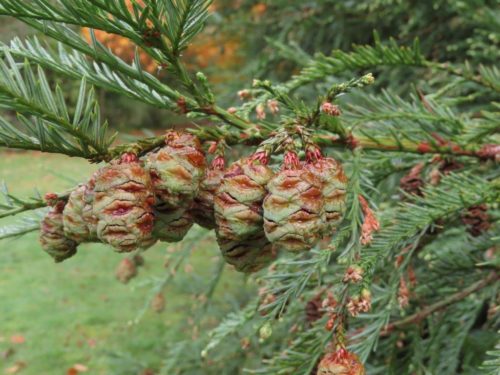 A trio of Redwoods also are worthy of note. The Giant and Coastal Redwoods in their native North America grow to huge heights, indeed are thought to be the world’s largest trees. The Giant (aka Wellingtonia)’s bark is soft and spongy and makes a cosy home for Treecreepers.  A third species, Dawn Redwood, is a very interesting species.  This deciduous conifer was known only as fossils, until living specimens were discovered in China and introduced to Britain and elsewhere in the 1940s.  A hopeful example of extinction rebellion! 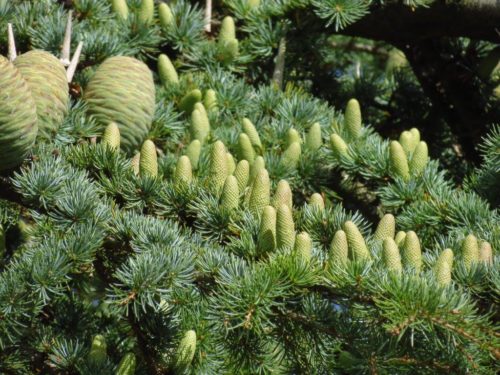 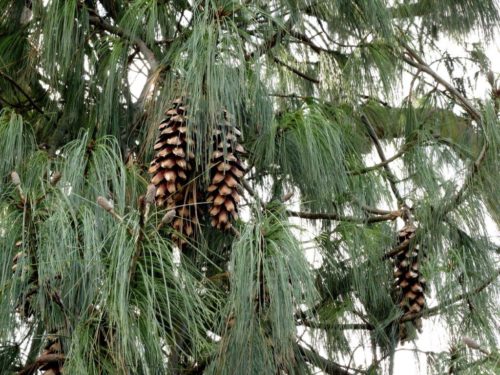 The Cedar of Lebanon could not be missed, being huge and was a popular choice for parks and formal gardens when the House was built, as was the Himalayan Pine. 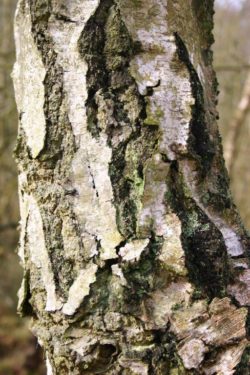 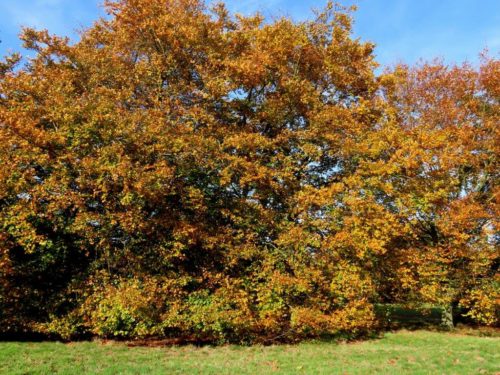 And so to native species, like Silver Birch,  Beech, Ash, and Wild Cherry, all of which are understated and beautiful in their own right and have the space and location to look their best in somewhere like Wivenhoe Park. 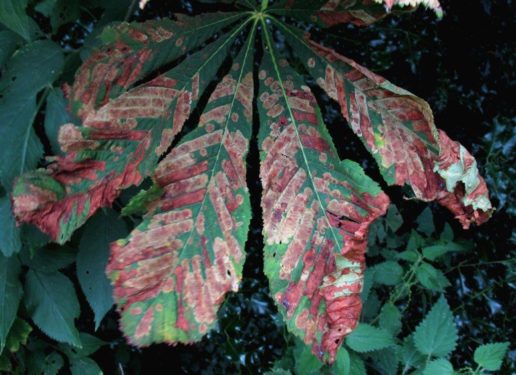 The Horse-chestnut, which we may think of as native is in fact an introduction from the Caucasus,  where rather shockingly it is now on the Red Data list, meaning its scarcity is of extreme concern.  It is planted throughout Europe, but is now subject to attack from the Horse-chestnut Leaf-miner moth Cameraria ohridella which causes the leaves to turn brown prematurely and whilst not actually damaging the tree must compromise the efficiency of the leaves .

We thank those of you who participated and hope that you enjoyed it as much as we did. And very grateful also to Dr James Canton who first introduced us to the University Tree Trail, and shared his unique insights as a ‘wild writer’ with us. 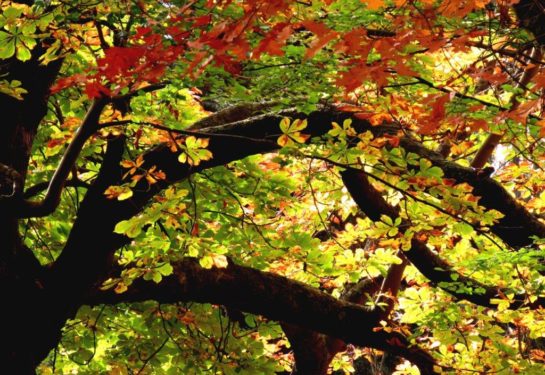 All the above photos are ours but not all were taken on the day. Some were from our recce, so the fungi might be looking a bit fresher than you remember!

For a different, delightful perspective on the walks, the perspective of the participant, you might like to look at Helen Chambers’ own blog ‘Fascinating Fungi‘.