It has been said that ‘Words are easy, like the wind’, but some words we learned on our walk today were not particularly easy, in fact decidedly complex!  Pangaea and Gondwanaland two for starters, not to mention Samara and Parthenogenesis…. 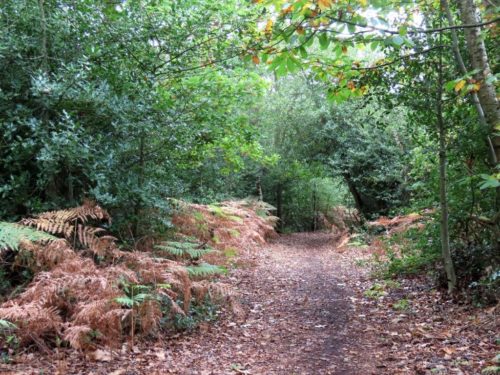 The first two cropped up in relation to two beech trees, the European Beech and Southern Beech which stand at the edge of the track down to Cockaynes Wood, the destination of our Botany and Bug walks this month. 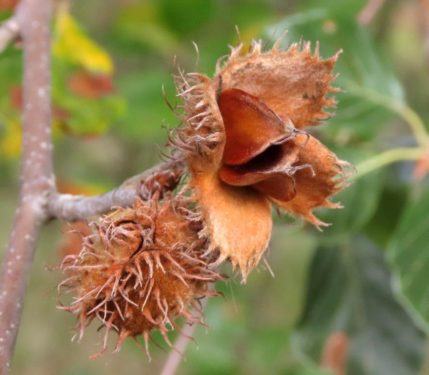 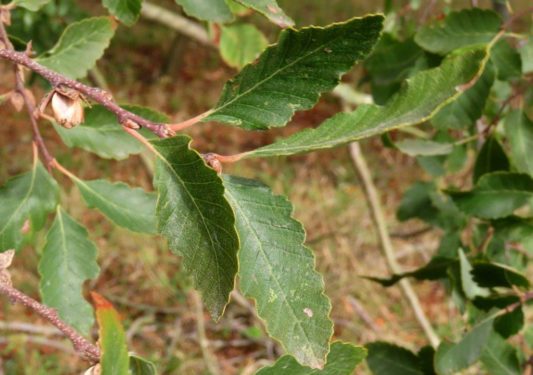 These two distantly related species, albeit in different families, share a common ancestor which occurred many millions of years ago on Pangaea, a supercontinent that included all the landmasses of the Earth. That subsequently broke up into Gondwanaland (present day South America, Africa, Arabia, Madagascar, India, Australia, and Antarctica) and Laurasia (everywhere else).  When the separation occurred, the common ancestor went with each landmass, but different climates and natural selection pressures drove the evolution of two now-separate families. It was recognition of such relationships which gave some of the most convincing evidence for the new theory of continental drift, as recently as the early part of the 20th Century. 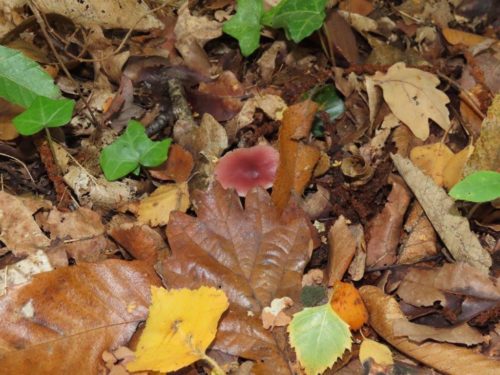 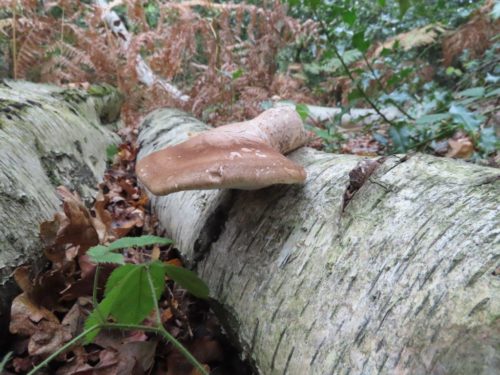 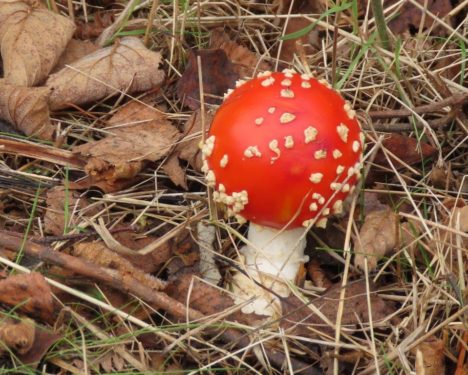 Our main focus this month was the trees and fungi of the wood, and some of the creatures therein.  Whilst fungi were not particularly plentiful, we found some of interest including a ‘troop’ (yes, it is the collective noun) of Puffballs forming a fairy ring, a Deceiver, Birch Bracket, plus our old favourite the Fly Agaric.  This familiar red and white toadstool grows associated with Birch, and although there are many of these trees in the wood ( so plentiful in fact that they need to be managed to keep them under control, particularly in the open heathland areas), we only found one small patch to admire.  Fly Agaric is renowned for its hallucinogenic properties, and being plentiful in Lapland has been associated with flying reindeer, and the whole red-and-white Santa Claus phenomenon. 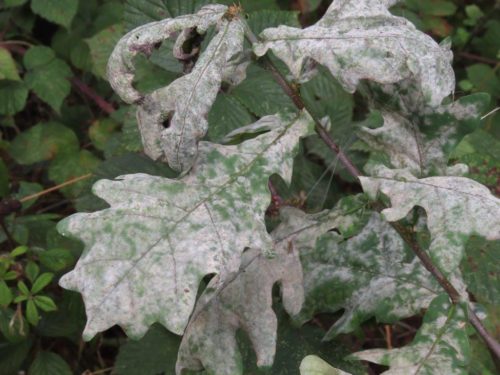 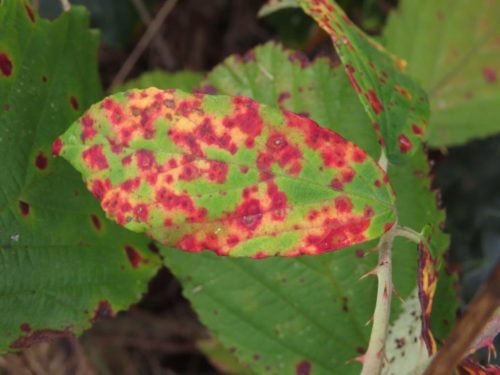 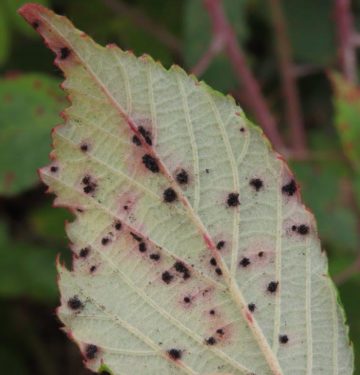 A Witch’s broom, often mistaken for a bird’s nest, is often also caused by a fungus, in this case the fungus Taphrina betulina on Silver Birch, one of several microfungi we encountered. Others included the powdery mildew Microsphaera alphitoides on Oak leaves and the rust fungus Phragmidium violaceum, red splodges on the upperside of Bramble leaves, and erupting volcanoes of black spores below. 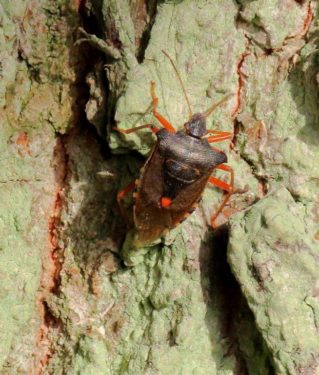 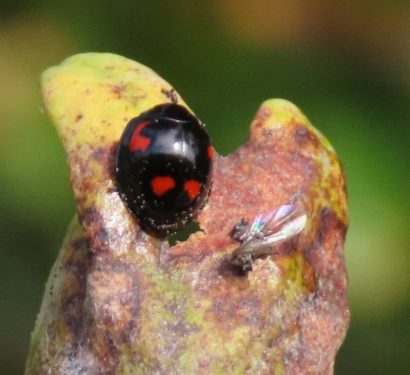 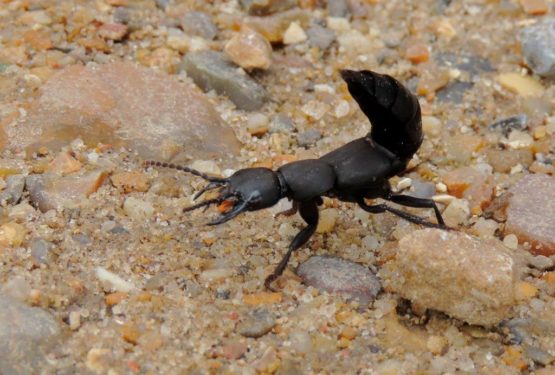 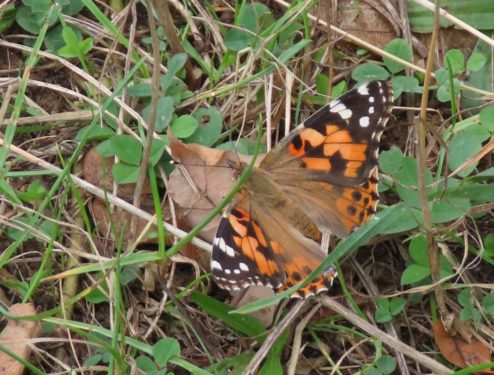 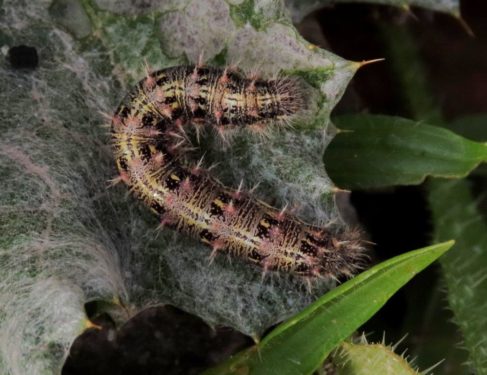 A few invertebrates were also on show.  A suite of our favourite bugs – Squash, Green Shield and Forest;  a splendid Devil’s Coach Horse beetle which adopted its fiercest pose; Pine Ladybirds; plus a pristine Painted Lady basking in the weak morning sun.  It is hard to believe that these fragile-looking creatures are migratory and able to fly thousands of miles.  Those on the afternoon walk missed the adult, but an eagle-eyed member of the group spotted the caterpillar, itself an amazing beastie. 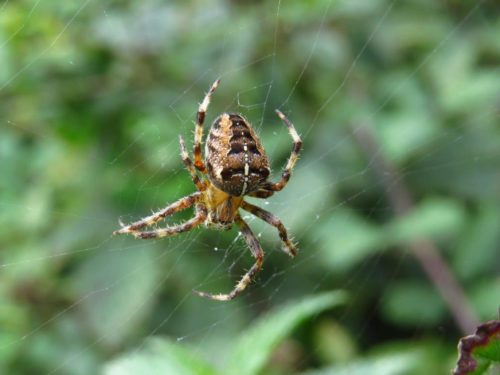 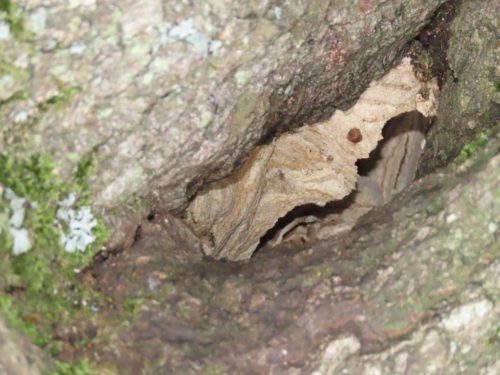 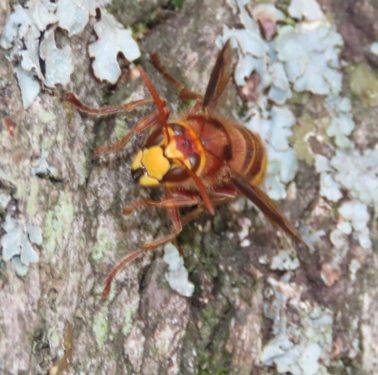 Spiders and harvestmen (arachnids, not insects, due to not having the requisite six legs) were out in force ready to catch careless flies for lunch.  Some, like the familiar Garden Spider, produce sticky webs to effect this whilst others rely on stealth.  It was also a privilege to see the very active Hornet’s nest in a hollow tree.  These huge, beautiful creatures are much maligned, but if left alone are not aggressive or harmful, and they do much good in gardens and woodlands, helping to control the legions of aphids and other ‘pests’. 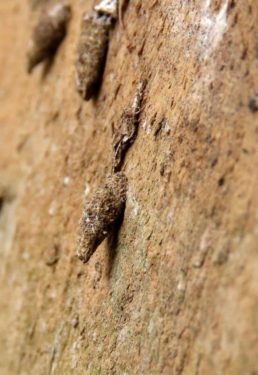 And so to another of our words of the day, ‘parthenogenesis’, meaning asexual reproduction.  The wonderfully named Virgin Bagworm, living on assorted fence posts, indeed lives a pure lifestyle.  These weeny wingless moths produce tiny bags which they decorate with lichen, and in which they (all females, no boys allowed, in fact they don’t exist) live for their whole life.  They can produce babies all by themselves with no help from anyone.  Hope it doesn’t catch on! 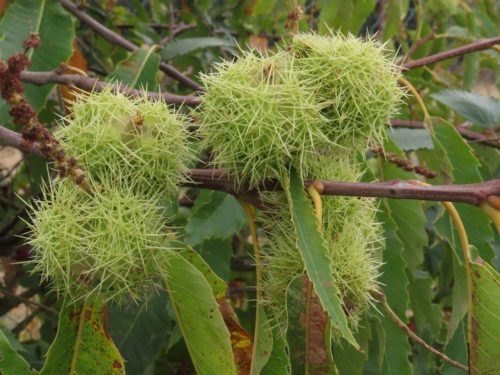 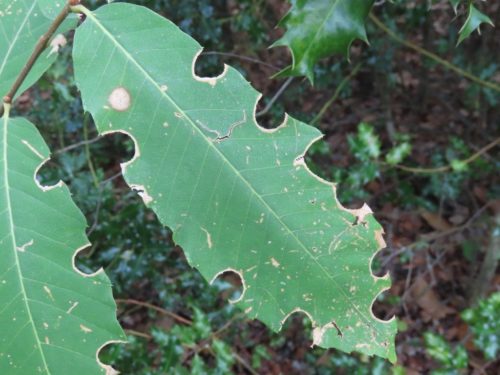 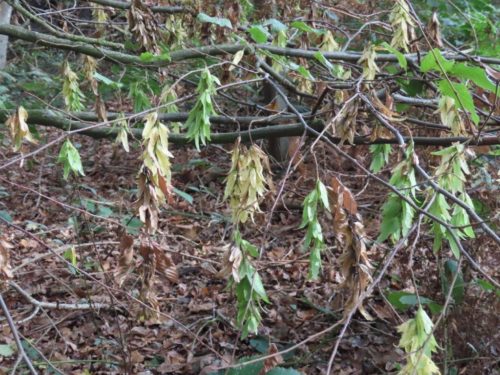 As for the trees in the wood itself, Sweet Chestnuts were plentiful, in places their leaves sculpted by the excisions of leaf-cutter bees, along with Holly, English Oak and Silver Birch. Hornbeams were at the fruiting stage, producing masses of dangling papery bunches, bunches of winged seeds or ‘samaras’, the last in our lexicon of odd words. 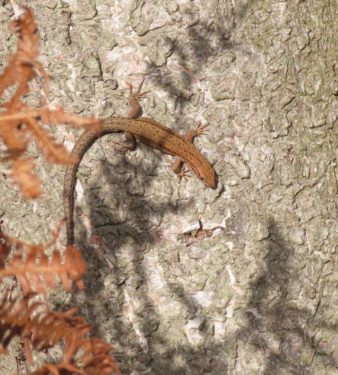 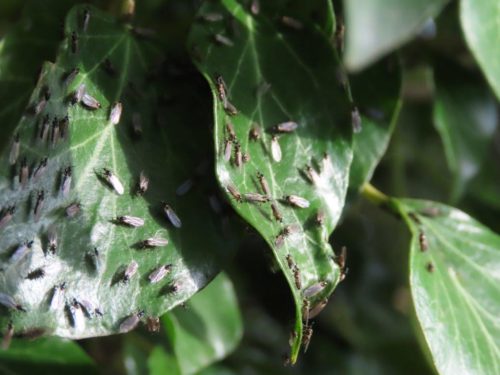 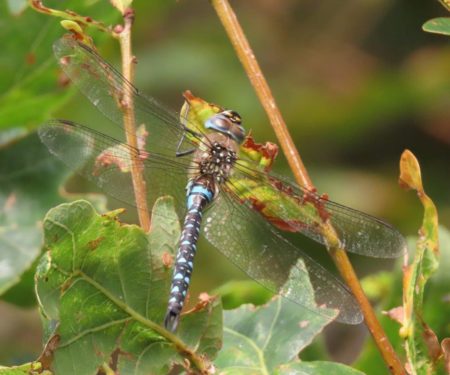 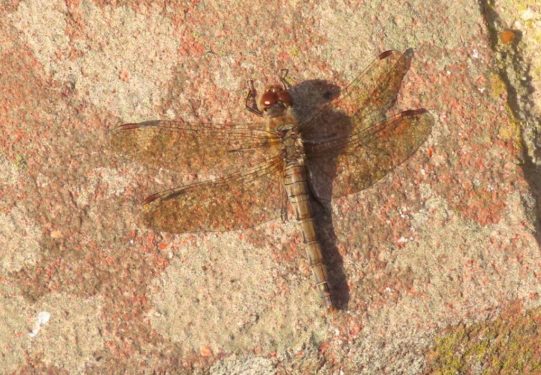 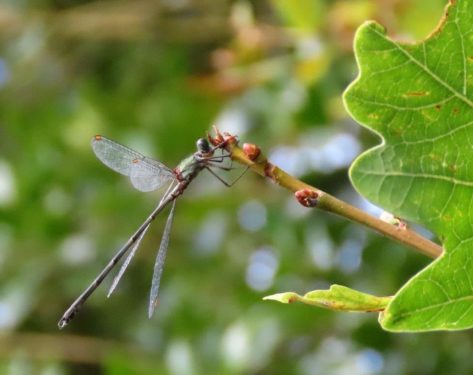 We finished the day with a flourish, seeing a Common Lizard basking in the glorious afternoon sunshine, an amazing aggregation of Scatopsid flies (aka Black Scavenger Flies), plus a veritable collection of Odonata  (dragonflies to you and me) hanging around, catching the last rays of the day: a Migrant Hawker, a few Common Darters, and  several Willow Emerald damselflies, a recent colonist of the British Isles, assumed to be one of the (rather few) upsides of Man-induced climate change, better thought of as climate breakdown, catastrophe even.

As always, many thanks to you all, old friends and new, that joined us .