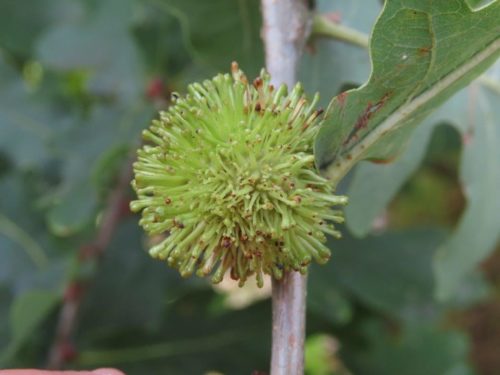 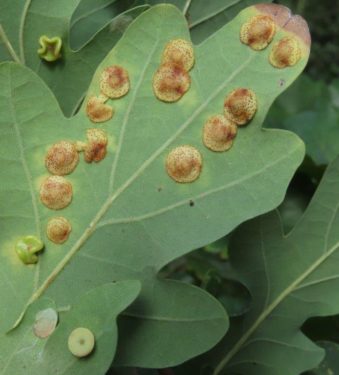 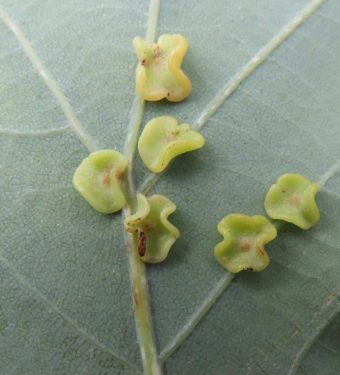 A couple of years after our first, delightful visit to Gunnersbury Triangle (see here), we were again in the vicinity last week, and took the opportunity of a perfect, mellow, sunny autumn day to sample its delights once more. In practice, we spent most of our hour there staring at just one tree, a three-metre Pedunculate Oak on the edge of a clearing, simply laden with galls…

Oak is of course renowned for the number of insects it supports. Many of those cause the formation of galls, abnormal growths in the host plant triggered by its interaction with a gall-causer. While many gall-causers are tiny (and essentially identical without microscopic examination), different species can be told apart by the shape, colour and texture of the galls in which their larvae develop. Those caused by Gall-wasps (Cynipdae) are some of the most distinctive, and all those shown below fall within that group. 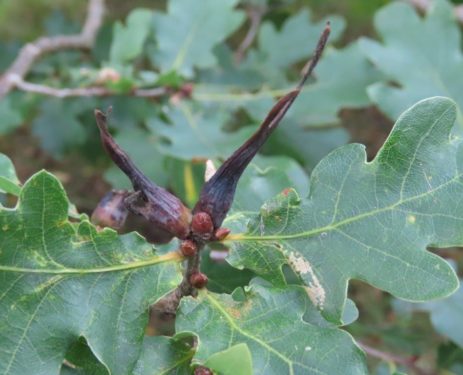 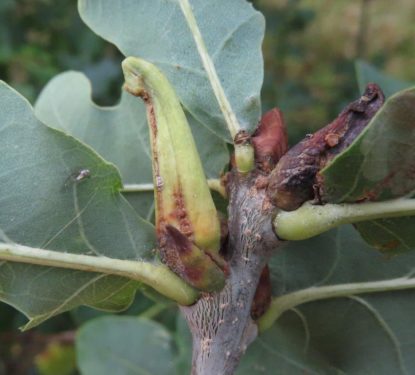 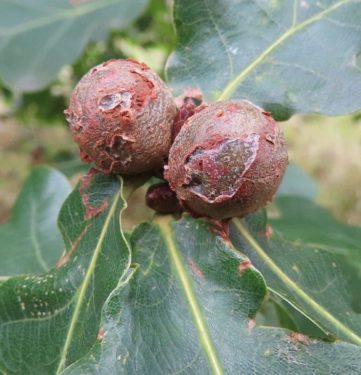 Galls can form on any part of the tree, but most obvious are those formed on buds and acorns, and those on leaves, often on the undersides. Perhaps surprisingly given its abundance in recent years, ‘our’ tree had no signs of the large, sticky, woody acorn distortions (Knopper Galls) of Andricus quercuscalicis, but other bud/acorn galls were obvious. By now we are reasonably familiar in Essex with both Ram’s-horn (Andricus aries) and Cola-nut (Andricus lignicolus) Galls, the latter like small, rough, scaly versions of the Marble Gall (Andricus kollari), one of the commonest species everywhere but again apparently missing on this tree. All four of these are relative newcomers to this country (Marble 1830s, Knopper 1960s, Cola-nut 1970s, Ram’s-horn 1997) and have now spread more-or-less widely. 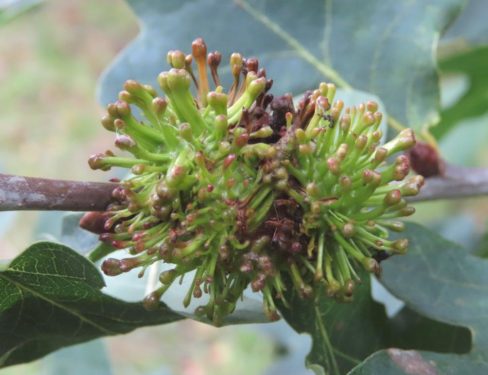 But especially exciting for us was one we hadn’t seen before, the Hedgehog Gall of Andricus lucidus, dramatic pompoms of blobby-ended spokes. Another newcomer, this was first found in Britain in London in the 1990s, but has hitherto shown few signs of spreading far.

London is seemingly the initial focus for many of these new arrivals, presumably in part due to the heat-island effect of the city, keeping winter temperatures 5°C or more higher than in the countryside, and favouring these species originating from more southerly climes. Another contributing factor could be the relative abundance of Turkey Oak alongside native Pedunculate Oak in London’s woodlands. This tree also originates from southern Europe (although the fossil record shows it to have been native here before the last Ice Age), and interestingly all the galls mentioned above (except possibly Ram’s-horn) rely on both oak species for specific stages of their life-cycle. With two generations a year, the sexual generation requires (and forms galls upon) Turkey Oak, while the asexual, late-summer generation is the one we were looking at… 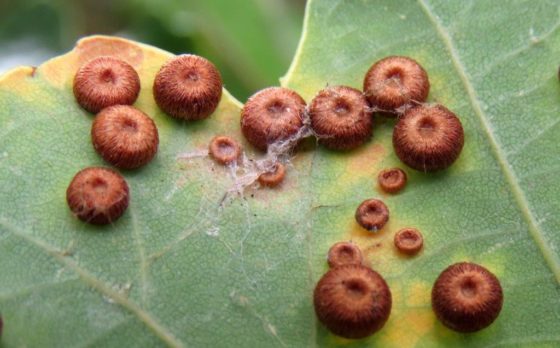 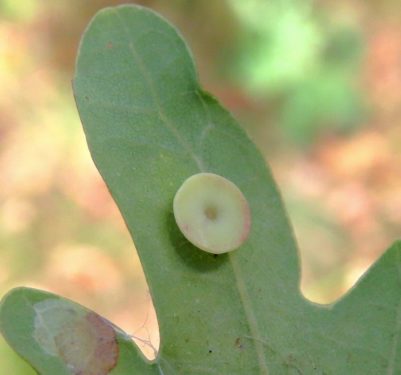 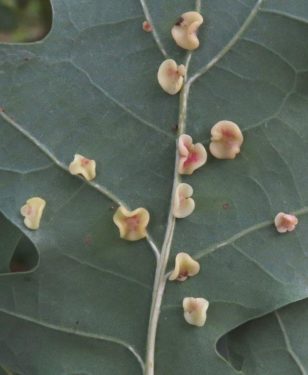 All were present on our tree, with Smooth Spangle typically the most scarce. But most certainly not present and correct, because most of the Smooth Spangles, instead of being flattened, smooth, whitish or pink discs, were puckered into the most beautiful flower-like forms. 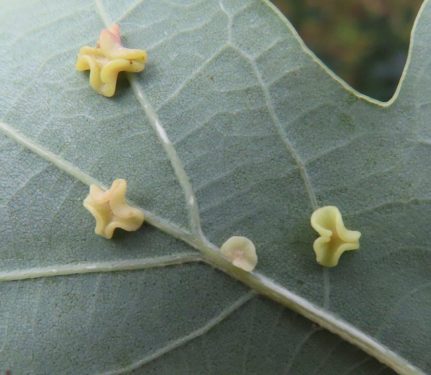 Another new one for us! But what was it? Eventually, we came up with a name from the internet. Neuroterus albipes variety reflexus. Or perhaps Neuroterus albipes subspecies reflexus. Or just perhaps even a separate, as yet undescribed species, ‘Neuroterus reflexus’. It seems nobody really knows what it is, or even where it is: the normally reliable Fauna Europaea database shows it (as ssp. reflexus) scattered across Europe, but perhaps significantly NOT in Britain or Ireland, nor indeed France, Germany and the Low Countries. 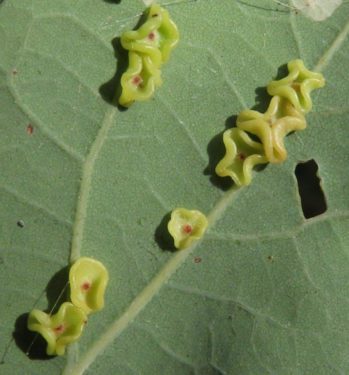 From our observations, we could well believe it is something different to albipes altogether, both from its distinctive, consistently variable shape, but also giving the strong impression of being more strongly associated with the main leaf veins than true albipes. 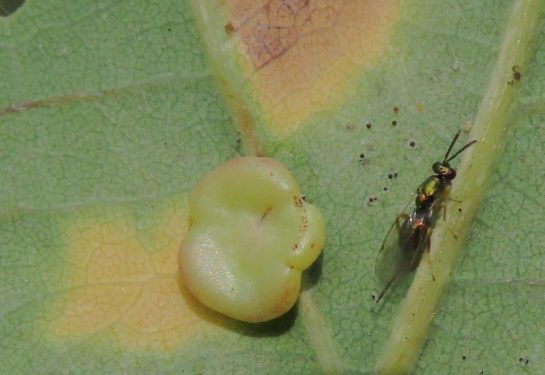 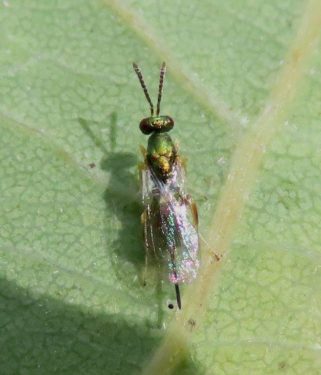 But there are perhaps other possibilities too. A reflexus gall on one leaf was being closely attended by a tiny 3mm wasp. Completely the wrong time of year and indeed the wrong shape for one of the gall wasps, this looked more like a parasitic species with a long ovipositor. Could the ‘reflexus‘ galls simply be parasitized Smooth Spangles? After all, big fleas have little fleas upon their backs to bite ’em, and little fleas have lesser fleas, and so ad infinitum….

Whatever the truth, a delightful hour of Gunnersbury Triangle magic provided us with new and interesting sightings, and more questions than answers! 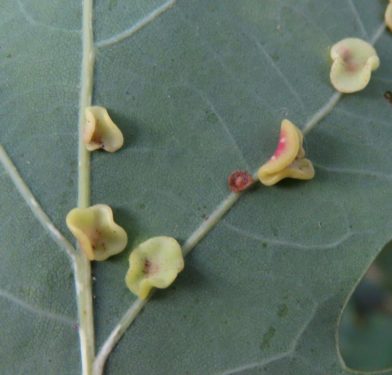 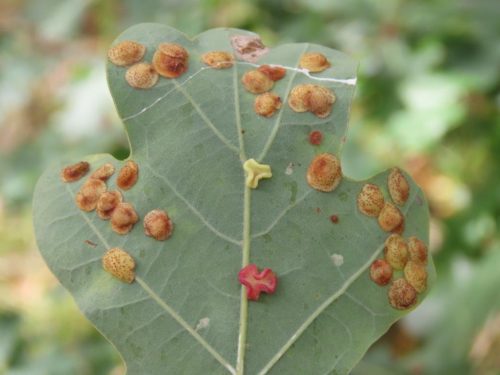