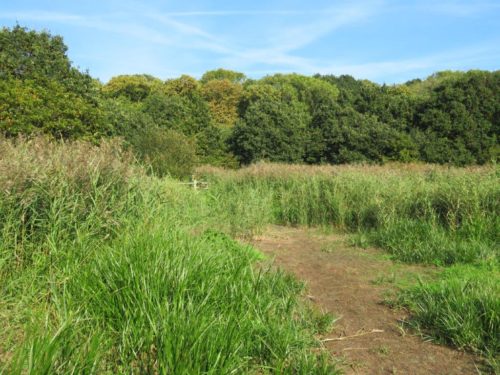 ‘Season of mists and mellow fruitfulness’, yes, Autumn has crept up on us, and today we looked at some of the ways nature has been able to ‘fill all fruit with ripeness to the core’. 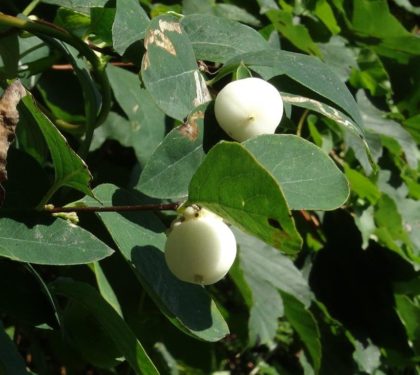 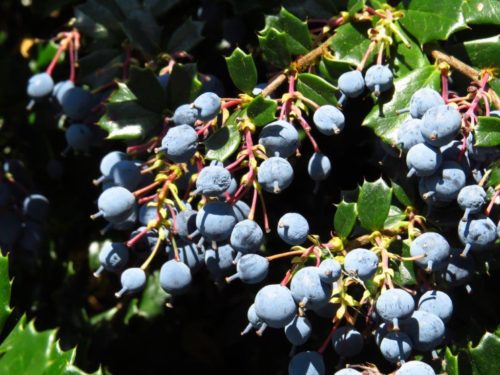 A visit to Wivenhoe car park may not be your first choice for a nature walk venue,  but a quick look at the shrubs and bushes soon revealed that even there nature has been hard at work producing berries and seeds.  Colourful, in an array of shapes and sizes , these are all intended to be noticed and eaten by birds and other wildlife, therefore enabling the plant to be multiplied and spread further than could be managed by just letting its seeds fall to the ground. Of particular interest were Berberis, Snowberry, Pyracantha and Viburnum, with Rose hips and festoons of White Bryony.  Hollies were there too, some with and some without berries – the reason? Well, it is the female that bears the famous berries, whilst the male flowers (on separate trees) earlier in the season provided the necessary pollen to fertilise the female flowers, leading to the formation of the berries. Lots of ideas here for those wishing to improve their gardens as a resource for wildlife. 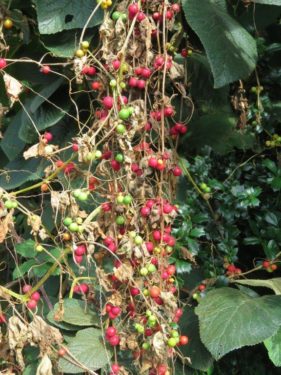 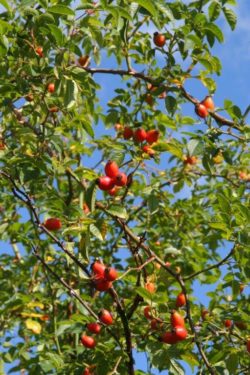 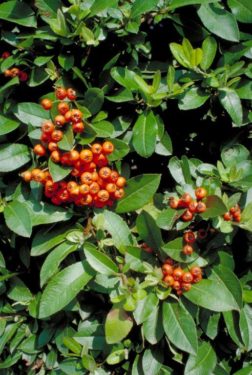 It was interesting to walk over KGV and see how the now-cut ‘Meadow’ is faring.  This year’s ‘experiment ‘ in leaving a small portion of the field unmown for a few months proved very successful,  the sheer variety of plants that sprung forth, and the benefit to butterflies, bees and other insects has been enormous. We trust the Council will allow, indeed encourage, this to be repeated next year and beyond. 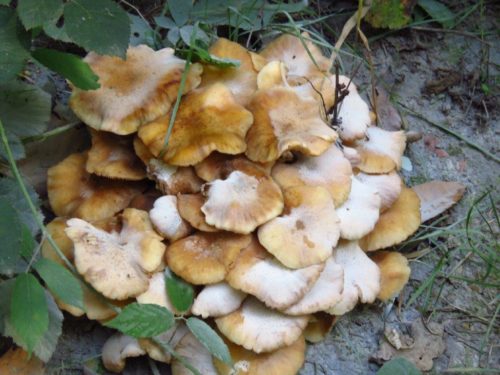 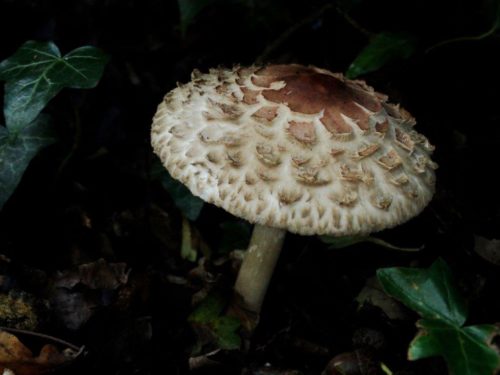 We had hoped to find a variety of fungi today, but a reccie yesterday was disappointing (due to lack of rain over the past few weeks) so we spent only a short time in the woods. A Parasol mushroom was seen on the edge of the wood, and a patch of Honey Fungus on a dead tree stump further in. 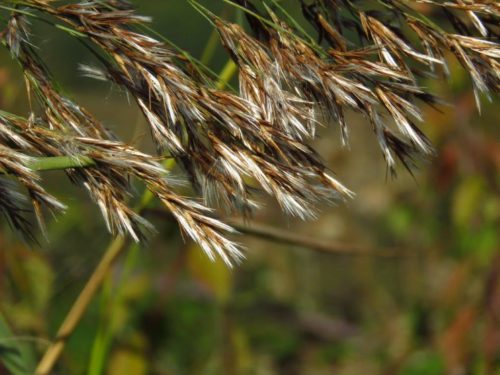 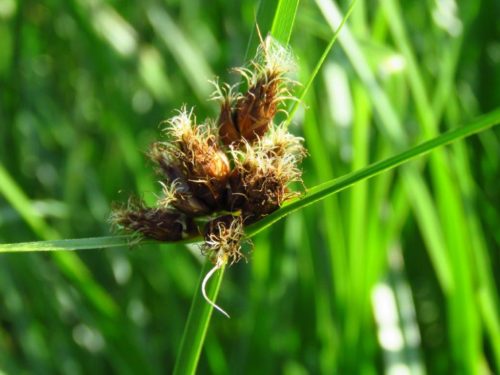 We concluded our morning with a walk through Ferry Marsh, following an incongruous peanut trail! It was interesting to see how the marsh has fared through its unprecedented period of inundation this summer.  It was good to see (and hear) the Reeds thriving on the re-wetted marsh, and just bursting into flower, as well as discover a few other marshland plants, including Sea Club-rush and Redshank. 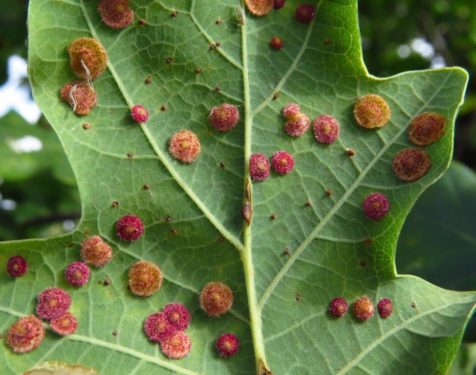 The small oak on the edge of the seawall was rich in galls – Spangles, Silk-buttons and Smooth Spangles, as well as Oak Apple and Marble Gall. Each of these home to minuscule creatures, which we can only identify by the shape of their gall home and the plant on which it is found. At the foot of the tree was a tennis ball shaped  Earthball fungus. When prodded this puffed out smoky spores: we had pre-empted the rain drops which were soon to fall and which would do the ‘prodding’ naturally. 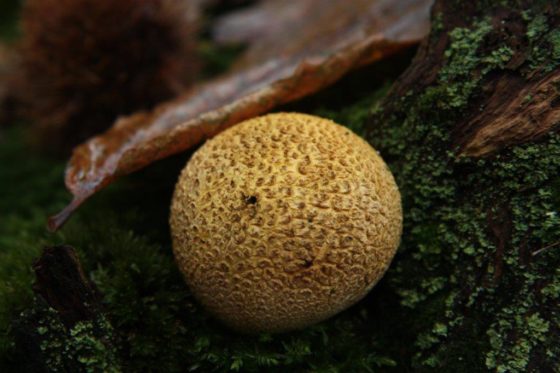 What of the bugs promised on our walks? Well, given the cold and damp conditions, most creatures were tucked up in the warm somewhere, but we did find a few things of interest:  Dolycoris  baccarum (Hairy Shield-bug), a crane fly complete with gyroscopic halteres (modified hind wings), several newly-emerged caddis-flies and large Garden Spiders, everywhere, waiting….. 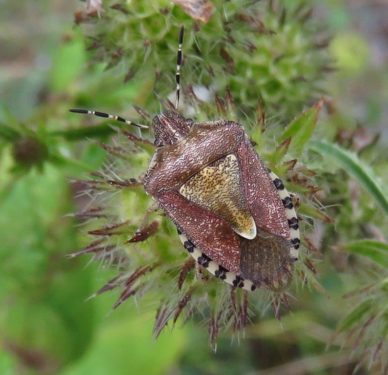 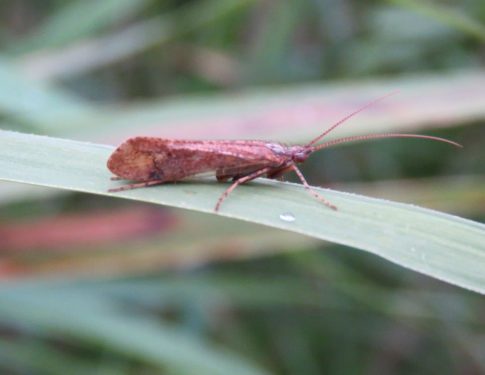 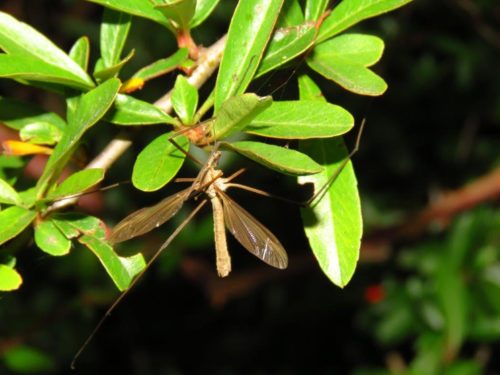 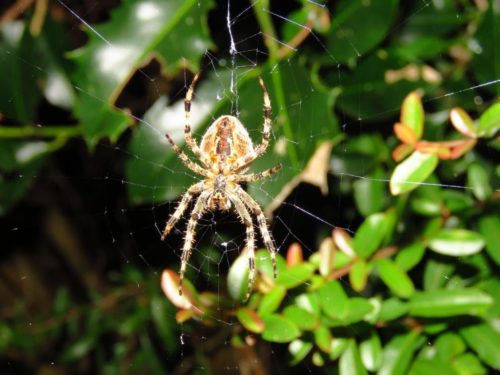 All the photos in this report are our own, but due to the poor light today, most were actually taken in more favourable conditions!

Thank you to all who turned out on this less-than-nice day, and to everyone who has supported our Botany and Bug walks this year.  We hope to offer a new season of outings next year and hope that at least some of you will be able to come along.  We may arrange a walk for November if conditions are right, and will advertise it accordingly.