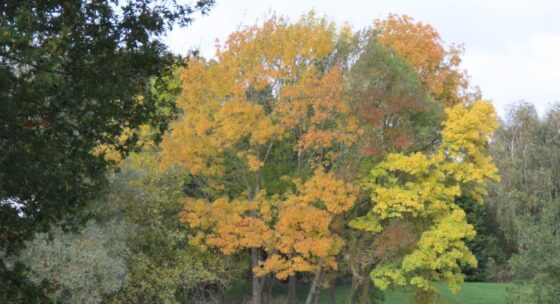 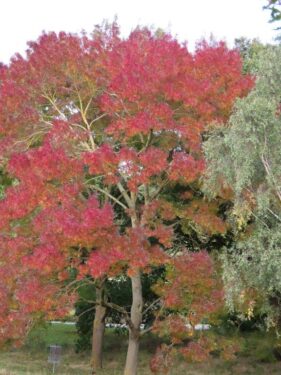 For those of us living in Wivenhoe, the University grounds (Wivenhoe Park) are a wonderful resource the year round, but never more so than in autumn with beautiful trees turning to russet and gold, and usually lots of fungi to discover.  This year the autumn is rather late in arriving, so many of the arboreal specimens are still in their summer coloration – but there was some evidence of a change in the Narrow-leaved Ash and the Norway Maples which were looking splendid on our morning walks in October.

As a demonstration of how the fires of autumn are either late, or subdued, this year, the photo below left shows the groundscape below Red Oak today; on the right are the leaves of the same tree exactly two years earlier. Different year, different weather conditions of the preceding summer, different colours… 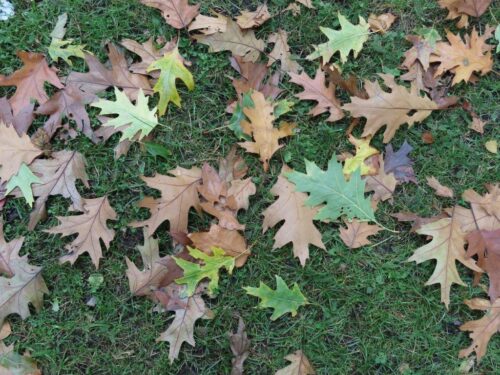 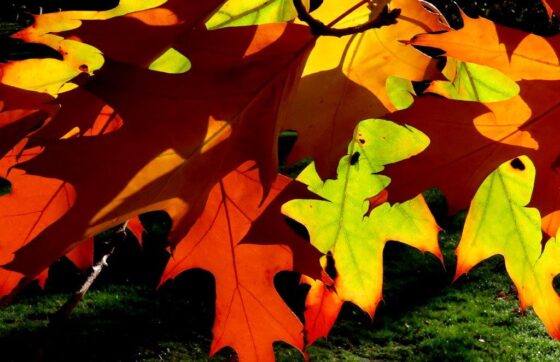 So our walk, billed as ‘Fruits, Foliage and Fungi’ was rather lacking in dramatic foliage, and also fruits. Acorns, for example, were almost non-existent, in complete contrast to last autumn, a mast year, when the trees were laden with the fattest acorns imaginable, in huge numbers. Fortunately, for those of a gastronomic bent, the Sweet Chestnuts, at least from some trees, have fattened well. 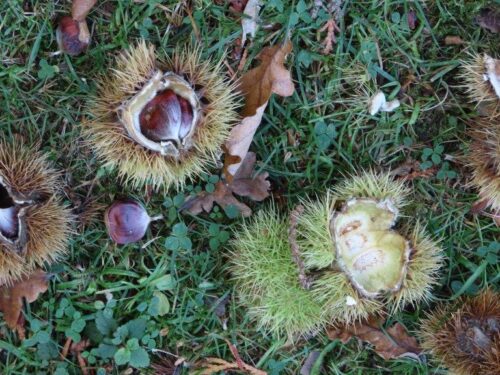 But as for fungi,  the damp summer and warm autumn have produced a bumper crop. On our walks we are not able to identify all the species we find with confidence – even expert mycologists have been known to mis-identify with alarming and potentially fatal results.  So we stick to pointing out what we can and offer tentative or group identifications where we are able, but never to say definitively ‘this is edible’…!

A summary of what we saw, in pictures…..

Everyone’s favourite, from elves to toads to Father Christmas, the Fly Agaric was in profusion around one of the Silver Birch Trees: 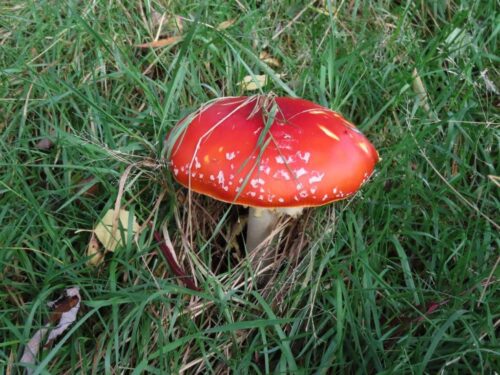 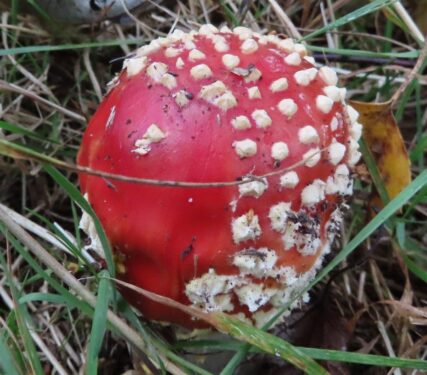 Several other species in the genus Amanita were also found, including one which may prove to be our most interesting find when it grows up. At this early button stage it has all the appearance of the Solitary Amanita, a rare , southern species in the UK. 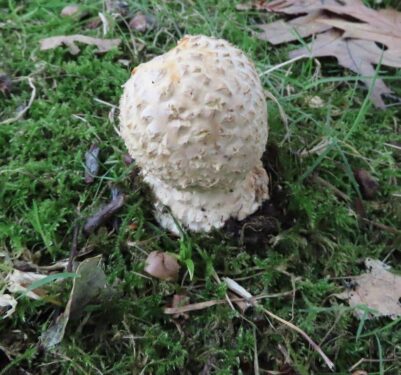 Under Beech and Oak trees, there was a variety of puffballs, earthballs, cheese-caps, penny-buns and lovely Amethyst Deceivers, at first almost invisible among the leaves, but seeming to emerge in troops as we got our eyes into searching: 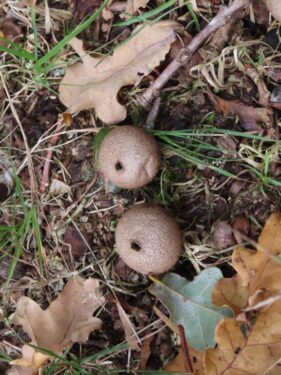 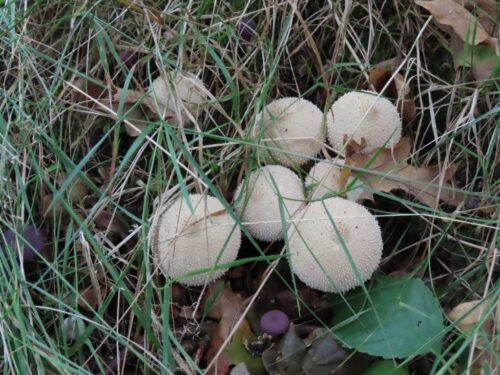 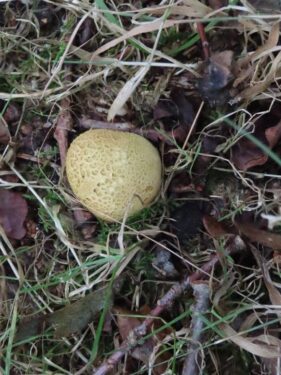 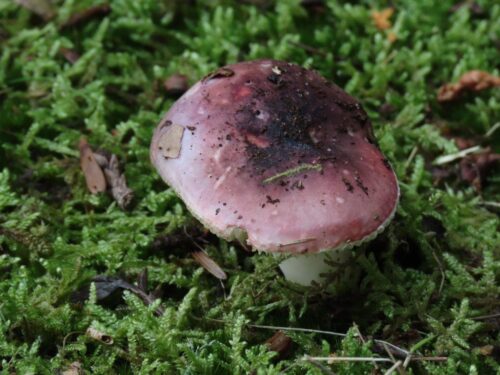 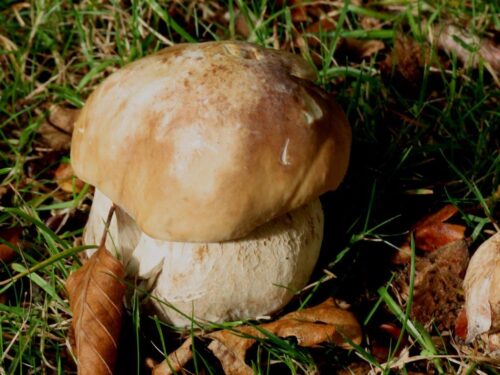 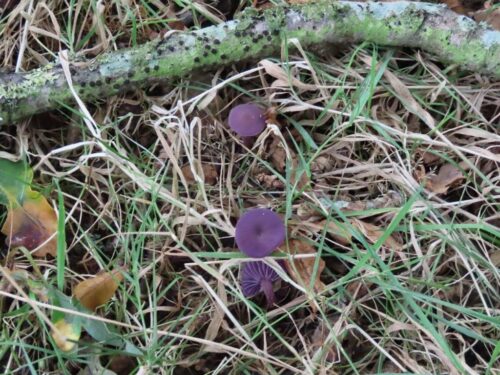 And out in the more open grassland, again a great range of species, from Shaggy Ink-caps to Liberty Caps and Parasols, Yellow Clubs to waxcaps, all indicating the ecological quality of the extensive grasslands in Wivenhoe Park. 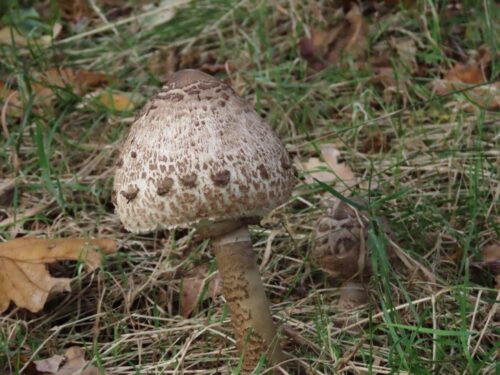 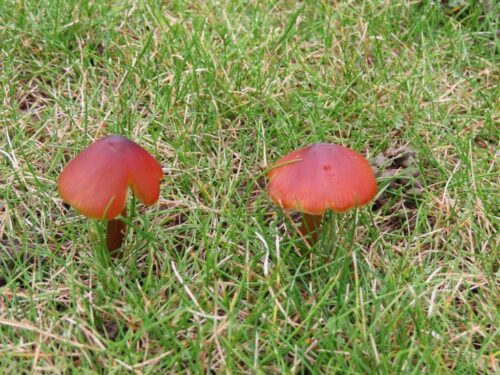 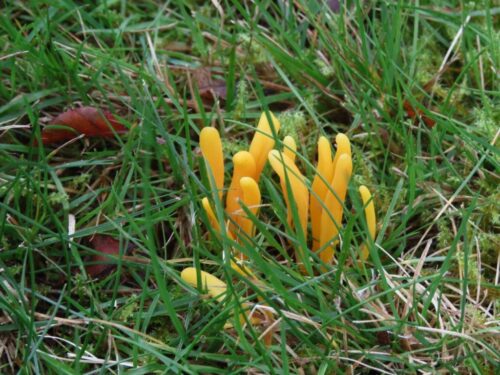 And then fungi growing on the old trees themselves, Beefsteaks and Sulphur-tufts recycling and hollowing, but not killing… 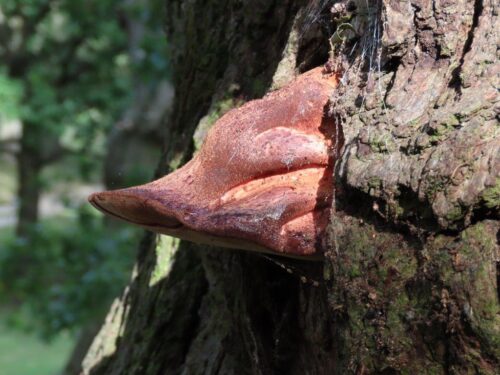 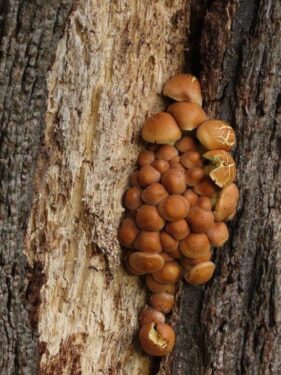 High in a large Oak. Chicken-of-the-Woods was fruiting…and as we peered skyward, a sharp pair of eyes spotted an anomalous set of leaves sprouting from a bough. It was a 2m tall Silver Birch sapling growing epiphytically from the Oak, the sort of thing we associate with rain forests, both temperate and tropical, but a surprise in the arid lands of north-east Essex. 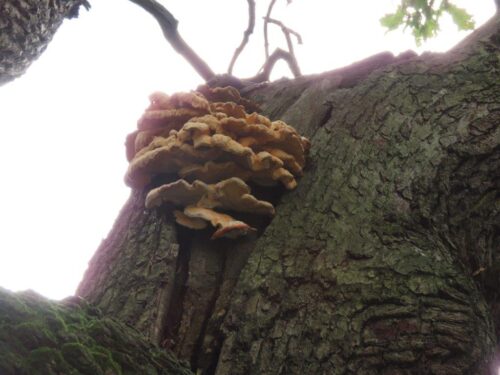 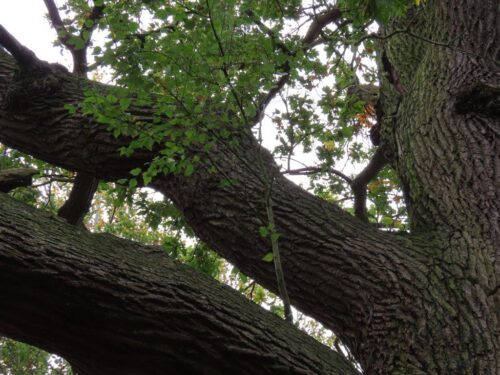 In keeping with the ‘Bug’ bit of our walks, we kept an eye open for invertebrates – and were hoping that the Rhododendron leafhopper Graphocephala fennahi  would make an appearance. Spectacular and relatively large for its family Cicadellidae, this is one of only a few creatures which makes its home on Rhododendron.  A quick peer at the host plant indicated that there were none to be found today, but here is ‘one that we took earlier’ on our recce a day previously, a somewhat warmer day. Certainly worth a search next time you are near a suitable plant. 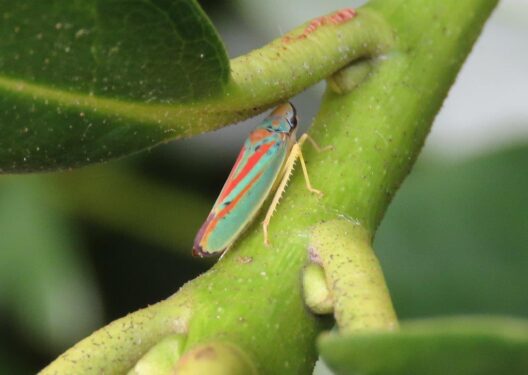 While we didn’t look in too much detail at galls this time, one that attracted our attention was these hairy little structures on Beech. These are the galls of the gall midge Hartigiola annulipes, which it seems is rather rare in Essex, with only seven previous records from the county shown on the Essex Field Club map. Another sharp pair of eyes spotted these little insects apparently coming out of the galls – as a mini-wasp, these are not the gall-causers, but likely a parasite thereof. 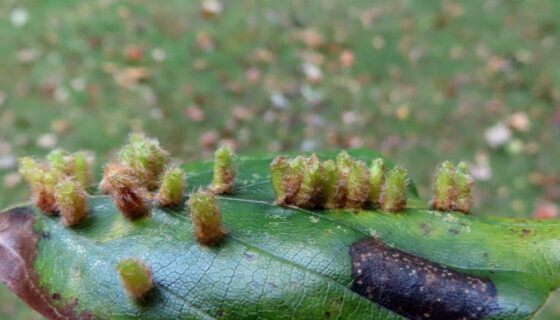 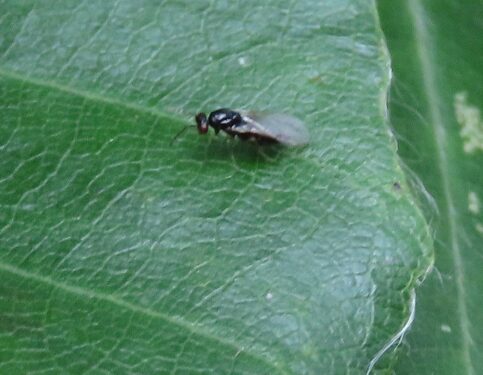 All those and more – Jackdaws and Green Woodpeckers as usual here flew the flag for the birds, along with a few Redwings ‘seep‘ing overhead, and one, maybe two, noisy Little Owls that unfortunately remained hidden.

For anyone looking to go back, the university has recently produced a second edition of its ‘Tree Guide’, well worth a look, and a visit to these grounds, at any time of year. To download a pdf of the guide, visit Wivenhoe Park | University of Essex, and follow the link.

Thank you to everyone who joined us and apologies to those who we had to turn away.  We like to keep our groups fairly small in number so that everyone can see and feel involved.  Apologies too that we unfortunately, inadvertently chose the Uni ‘Open day’ to arrange this event, so Chris had to compete with loud music and a helicopter overhead, but hopefully none of this got in the way of enjoying the nature!