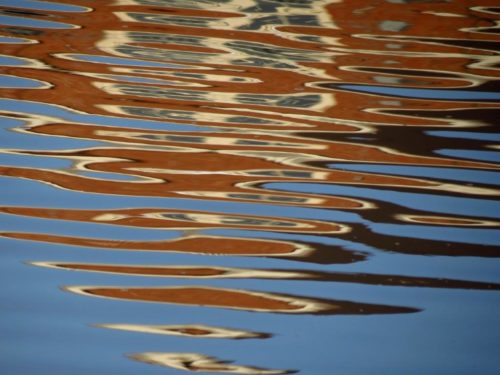 In the first part of this blog, I touched on an issue for Natural England which has become apparent as I have left their employment, that of a feeling amongst staff of disenfranchisement. Now that I have found my voice, this second (and probably final) part nails my colours to the mast and explains my personal views on some of the key issues of our time.

I realise that my views could be dismissed as the rants of a disillusioned staff member who has been ‘let go’ early, being surplus to requirements. But that’s not the case. I am still proud of the work of NE and its predecessors, and my departure was a positive choice on my part. However, it is certainly not the case that I agree with everything it has done.

Take for example the licensing of Badger culling in an attempt to control Bovine TB. I disagree with that. Although I am not an expert on the matter,  I trust and respect those often eminent scientific experts,  contrary the ‘anti-expertise’ dogma which is sweeping the world, who maintain that the efficacy of such an approach is highly questionable, and indeed may even be counter-productive. I recognise that NE is in a difficult place, caught between its much vaunted evidence-based decision making and having to deliver Defra policy. But with all due respect, I think there is a considerable difference between the evidence coming from the scientific community and the ‘evidence’ coming from politicians (whose expertise, such as it is, is only around how to manage the diverse expectations of their constituents and lobby groups). Or indeed the ‘evidence’ coming from dairy farmers, caught at the sharp end of BTB, and understandably wanting something to blame, to see some action.

Worryingly, the licensing of badger culling for BTB control may be opening a can of worms, by creating an assumed precedent. Badgers in sea walls in Lincolnshire? Public calls to cull them! Not, as would have been the case in the past, to translocate them. While it is not likely that such calls to cull would ever be licensed, the conceptual genie is out of the bottle, and it may not be possible to contain it.

And then there’s the question of licensing the lethal control of Buzzards, to support Pheasant-rearing businesses. Again I disagree, maybe more from a moral perspective – to kill a protected raptor because of its predation upon an alien bird, arguably a pest, which is reared, released and shot in its millions. But again there are external influences which impact upon NE’s decision – in this case a High Court judgement. But have all alternative solutions been explored? And are there really no grounds to challenge the legal ruling? And if not, why not? Shouldn’t the wildlife licensing system have at its heart protection of the species, one that is awe-inspiring and a considerable success story, rather than ‘de-protecting’ it to facilitate economic returns… If NE really is caught in between the proverbial rock and the legal hard place, should it not be out there seeking changes in the law to reflect the views of the majority, who value and are inspired by the majesty of large raptors flying free, rather than the few who make a living from shooting or get their fulfilment through killing?

As with the Badgers, this decision is turning into a precedent, with several other similar applications under consideration. Where will it end? And more worryingly, how can we accept that the terms of the licence (numbers killed etc) will be adhered to? What happens if someone exercising a legal right to kill a Buzzard ‘accidentally’ misidentifies a passing Hen Harrier? Many unpleasant and illegal acts of persecution have taken place under a cloak of secrecy, out of the public gaze, on shooting estates: how can we be assured that nominally legalized Buzzard control will not go beyond the bounds and be added to the litany of illegal persecutions of protected birds?

While I recognise the need for NE to satisfy its political masters (oh for the days when we were an independent watchdog!) and remain within the bounds of law, I cannot help but feel that this has been at the expense of respect from and credibility with the wider conservation community. And when the time comes that NE itself is deemed to be ‘surplus to requirements’, as surely it will, it will need to turn to that community for its very survival. And to return to my earlier theme in Part 1 – NE should unlock the passion in its workforce, and win friends and supporters for the future.

Of course, NE does many things well, and with which I am proud to have been associated. None more so that the creation (now almost complete) of a coherent network of Marine Protected Areas (MCZs, SPAs and SACs). And all delivered with relatively little adverse comment and reaction: were we to have embarked on such a programme on the land at the same time and in the same political and economic climate, there would have been uproar, particularly from vested interests set on making money by turning countryside into suburbia.

Out at sea there are few developers. And most of those that there are (especially offshore wind companies) have a long history of working with us to reach genuinely sustainable development solutions. Likewise there are few regulatory authorities, unlike on land where the multitude of quasi-independent authorities provides ample opportunity for perversion of the democratic process (sorry that should read ‘lobbying’), forcing compromise when compromise is inappropriate, and means the loss of an irreplaceable part of our common natural heritage. All in the pursuit of Government priorities ie housing, jobs and economic growth.

Other things NE can be proud of, I believe, include:

So to my final perspective: Natural England is that proverbial Curates Egg – good in parts. I can only hope that when viewed through the lens of hindsight, its achievements for the natural environment are seen to outweigh the follies.

Sorry for the length of these postings, and thank you to anyone who read this far: I had a lot to get off my chest! Future postings will be shorter – and more illustrated! Next stop for me – Menorca and its autumn wildlife…

And finally, my metaphorical ‘golden watch’. My parting gifts included this wonderful original painting of Swifts over the church I can see from our flat, the work of my friend and outstanding local artist Richard Allen. Little did they know how much I have coveted this image since it first appeared in British Birds. And how it symbolizes the feelings I have right now – wild spirits flying free above Wivenhoe. 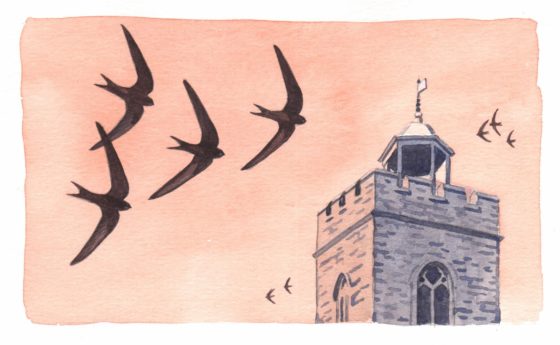