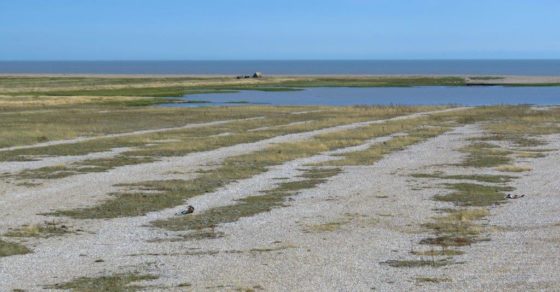 Truly one of the great shingle structures of the world, rivalled in the UK only by Dungeness and Chesil Beach, Orfordness is a place I have visited professionally over the past twenty years or so. But now in retirement is the time to enjoy it for what it is, rather than as just another item on my ‘to do’ list…..

And so earlier this week we paid a visit under skies of almost Mediterranean blue, the forecast cloud remaining a few kilometres inland and a smudge of sea fret a similar distance offshore among the windfarms. 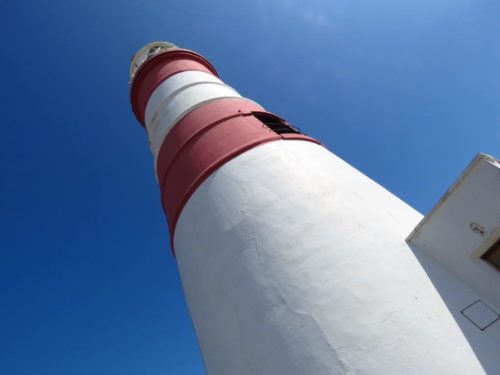 As a naturalist, it is the natural aspect of the Ness which takes top billing. A series of low shingle ridges run through it, each the result of a severe storm event some time during its several hundred year history, since the landward port of Orford lost its open sea aspect. Smaller stones thrown up to the highest points of the ridges influence the colonisation by plants such that the natural Ness now presents itself as a series of alternating open gravel and vegetated stripes on the gently undulating surface. 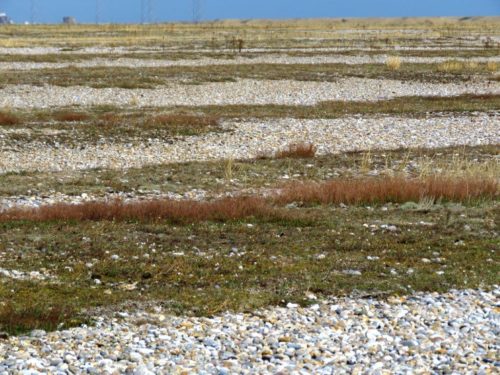 But just as interesting is the overlay of human history, largely military use over much of the 20th century. The litter of history – concrete, wire and metal, and iconic buildings – was imposed on the naturalNess and left its scars on the fragile landscape, but now under the benign management of the National Trust it is gradually melting away, a metaphor for the impermanence of Man. 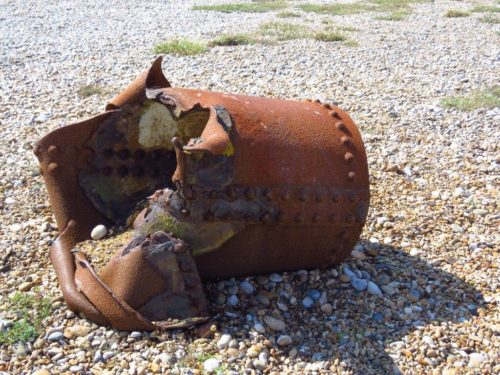 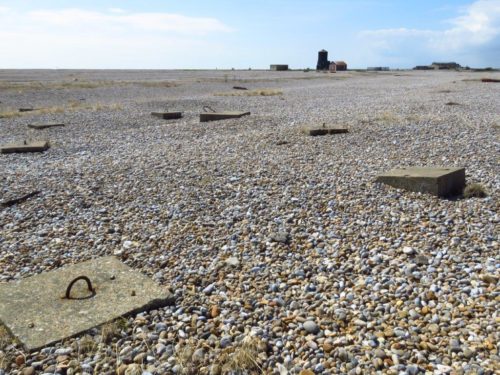 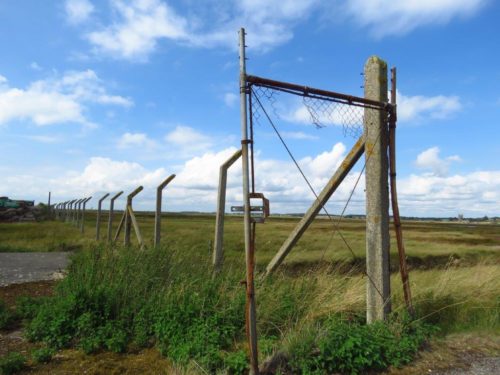 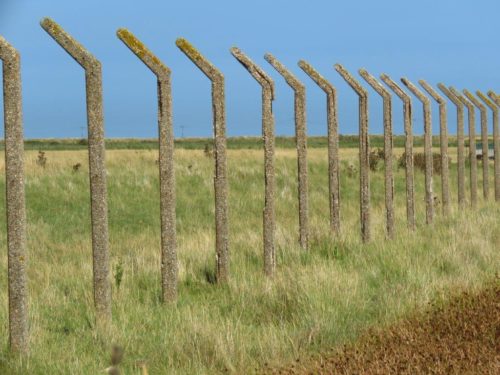 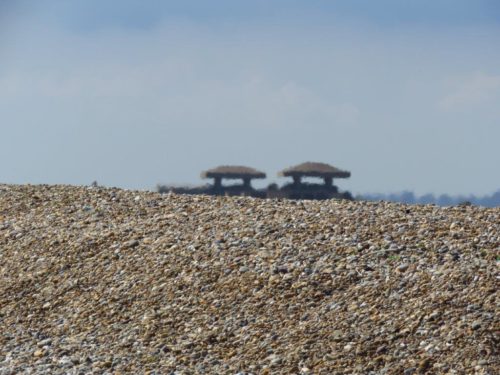 Shingle structures exist in a state of perpetual tension, both created and eroded by the sea. Orfordness is no exception, still extending southwards through longshore drift, but becoming narrower year-on-year by erosion. The lighthouse, now redundant as a light but still a much-loved land- and sea-mark, teeters on the brink and will soon be reclaimed by the sea … just as happened with the two previous lights built in 1637 and 1780. 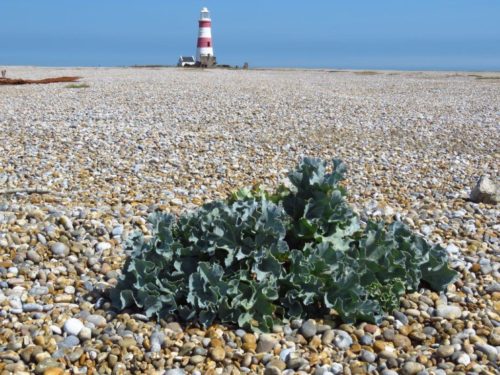 Living on an ever-shifting site, and subject to severe drought stress every summer, the wildlife of the Ness is necessarily specialised and able to thrive with little water. But after a summer with no rain for most of June and July, it isn’t surprising that flowers were few and far between. Still though Yellow Horned-poppy was clinging to flower on the ridges, with Babington’s Orache on the slopes down to the sea. 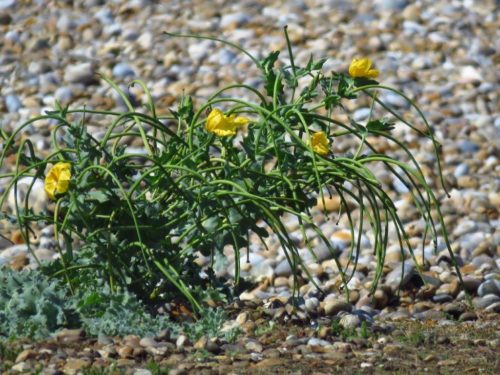 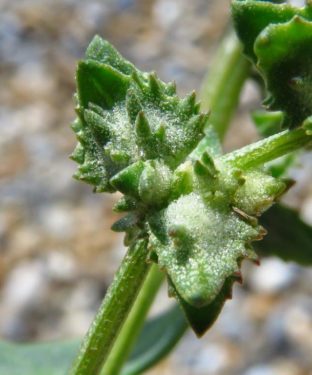 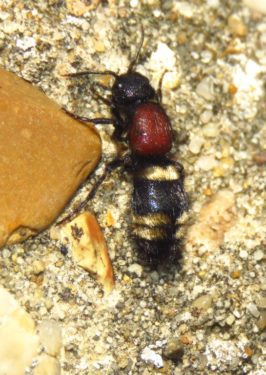 And likewise the insects, few to be seen save for a few bumblebees seeking out the meagre flower supply. But as we waited at the quay for the ferry to return us to civilisation, a Large Velvet Ant came from a hole in the low concrete wall upon which we were sitting. The available records don’t show this as a known site, and indeed its previous East Anglian records are only from a couple of sites further north on the Suffolk coast and a scattering of more inland sites in Essex. 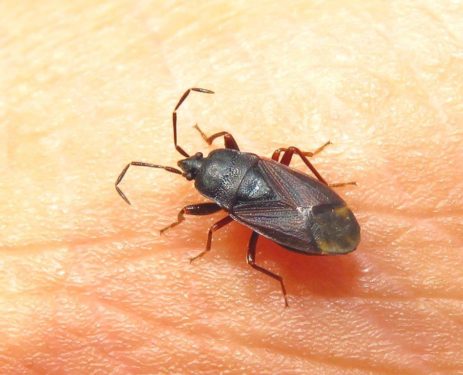 If anything even more exciting, although equally obliging, was a black ground bug that just happened to alight on Jude’s arm as we sat outside the beach café in Orford, awaiting the ferry in the morning. Unknown to us, a few quick snaps enabled Tristan Bantock, the national expert, to identify it as the nationally scarce, south-eastern species Drymus latus, which Nigel Cuming, bug recorder for the Suffolk Naturalists Society, confirmed as the first record for the county.

Two  superb insects showing why it is a good idea never to switch off looking. Hundreds of hectares of natural habitat, but the stars of the show came to us!