It almost felt like normal – a dozen wildlife fans and us being able to spend time together enjoying the natural world. Our venue this time was the large churchyard of All Saints’, Brightlingsea, followed by a potter along the adjacent lane. 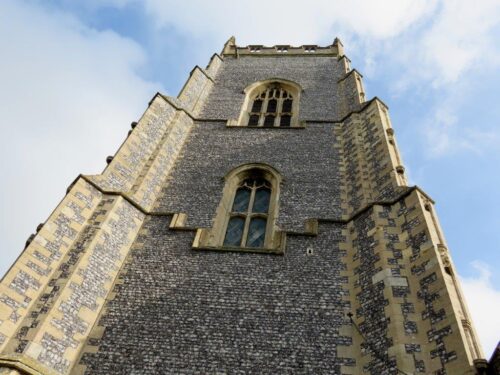 All Saints’ Church itself is impressive – the decorative flint indicating its historic wealth and importance. The churchyard covers a vast area with quite a few trees and features such as log piles and an Insect Hotel, all of which are valuable homes for invertebrates. However, with the exception of some patches of Lesser Calamint (a sweet-smelling and Nationally Scarce plant), most areas seem to be mown (too) regularly to provide much assistance to wildlife. It is commendable to provide homes for things to live in, but these creatures also need places to feed and breed. But on the plus side, the church does welcome the large colony of Soprano Pipistrelles it hosts! 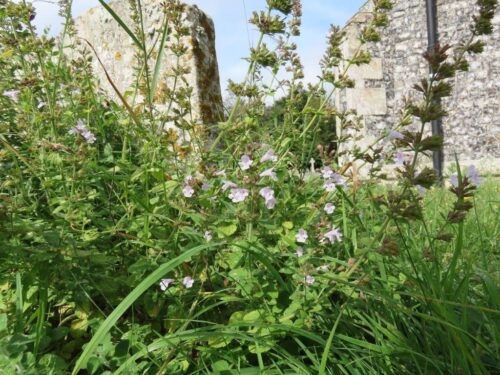 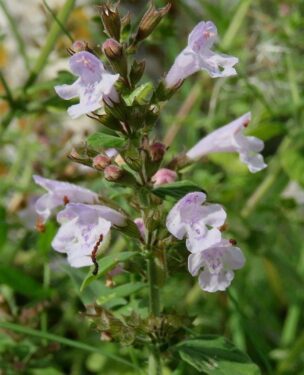 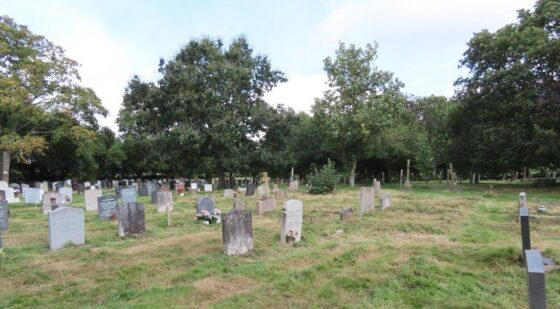 The morning got off to a dull start (and we were grumpy that the No 62 Bus had failed to turn up!), but things were soon brightened by a lovely Speckled Bush-cricket who was sitting on the fence hoping for some sun. Other invertebrates in the churchyard included a large spider (brought to our attention by its long legs poking out of a grave), plus a  Harvestman sheltering away from the wind. We spotted a brilliant green sawfly larvae on a gravestone – and it demonstrated very nicely the arrangement of legs on sawfly (which are types of wasp) larvae as opposed to lepidopteran (butterfly and moth) larvae, which in technical terms have fewer pro-legs. 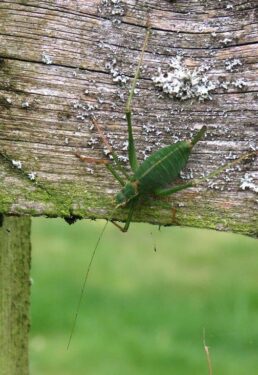 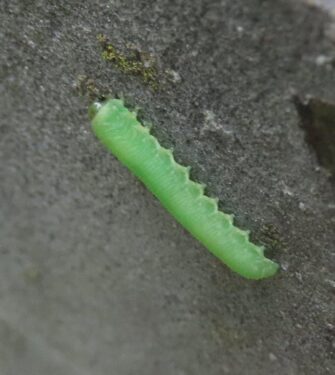 Lichens are doing well in this holy space. These fascinating organisms are in fact each a composite of an algae living with a fungus, so not really species in their own right, though each are scientifically named, e.g. the Sunburst Lichen is known as Xanthoria parietina. Their ubiquitous presence is an indicator of the general comparatively good air quality as opposed to that of the pre-Clean Air Acts era, when acid rain had a negative effect on them. 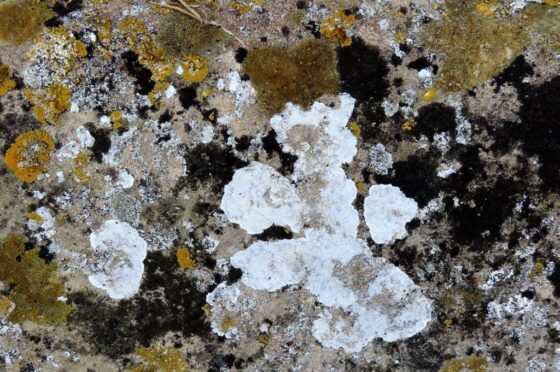 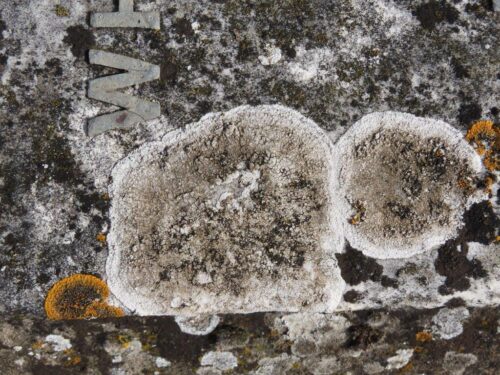 It was lovely to see a few areas of pink Ivy-leaved Cyclamens – the phrase ‘small is beautiful’ is so apt, compared to the blowsy horticulturally enhanced varieties that are available. This is the only cyclamen that stakes any claim to native status in the British Isles, but not around here where it is derived from cultivation or deliberately planted. Irrespective, it is a welcome splash of autumn colour. 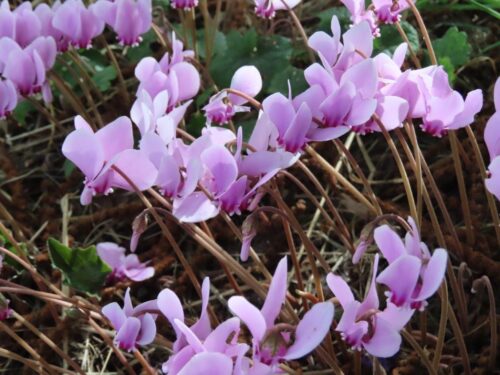 The weather brightened just as the walk was drawing to an end. The Ivy bushes along Moverons Lane were teeming with all kinds of life in the sunshine – Willow Emerald damselflies (a species which has colonised Britain over the past 20 years), Red Admiral butterflies and many types of bees and hoverflies.  Such a joy to stand and watch, listen and smell the flowers! Ivy gets a bad press, but it is such an important source of food and shelter to all kinds of insects and birds; it does not kill trees and it can provide protection to buildings that it grows up. 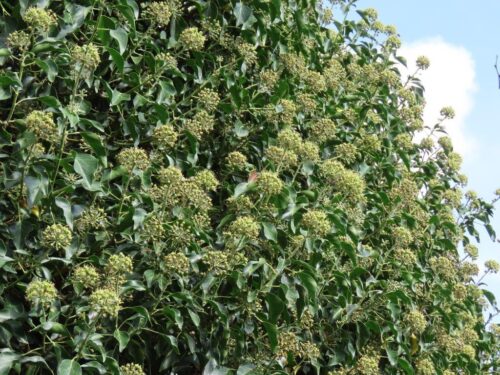 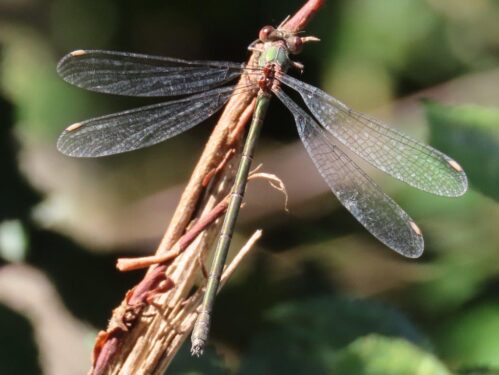 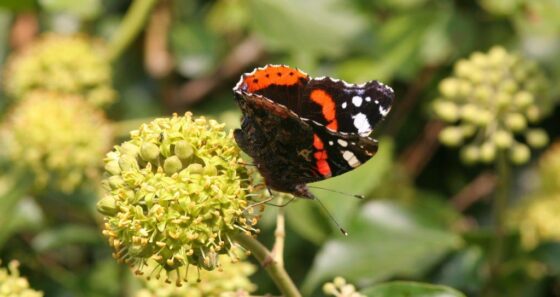 Elms are present along the lane – not large Elm trees that had once graced our countryside – but now thanks to Dutch Elm disease only the smaller shrub-like trees, which only grow for a few years before becoming overcome with infection by the fungus-carrying bark beetle  Scolytus scolytus. However, the galleries these creature make under the bark are truly beautiful and artistic. Other recent artistic additions to the nation’s fauna include the Zig-Zag Elm Sawfly which makes rather charming zigzags as it chomps its way along the leaves.  A sharp-eyed member of our group found a well-camouflaged Dark Bush-cricket nestling on a post, whilst Chris noticed this crazy moth caterpillar (a Grey Dagger moth). 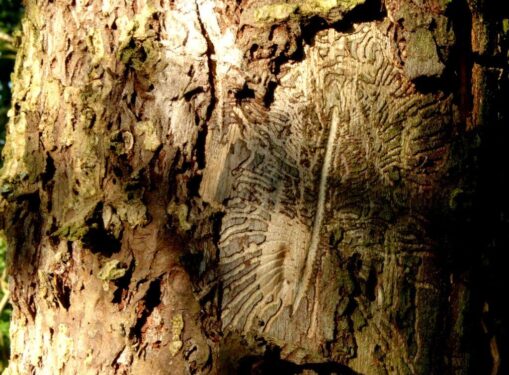 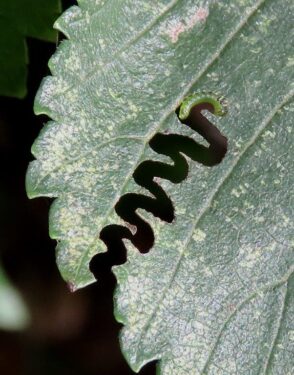 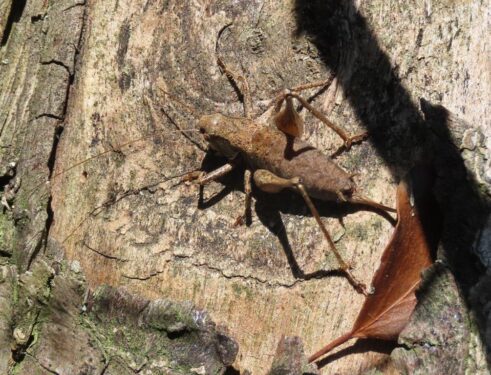 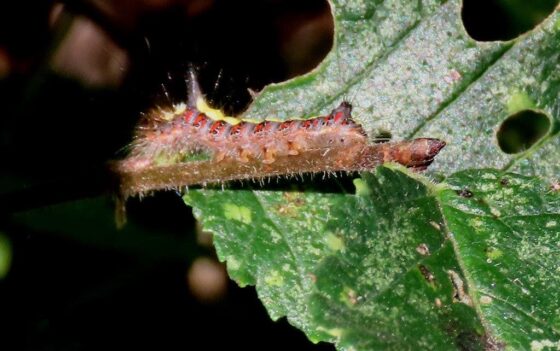 Just as we were wandering back to the cars a Devil’s Coach Horse beetle scuttled across the road – rearing its back end up as a warning to us. These are a type of rove beetle, and totally harmless. We managed to shepherd it out of harm’s way before saying our goodbyes to the group. 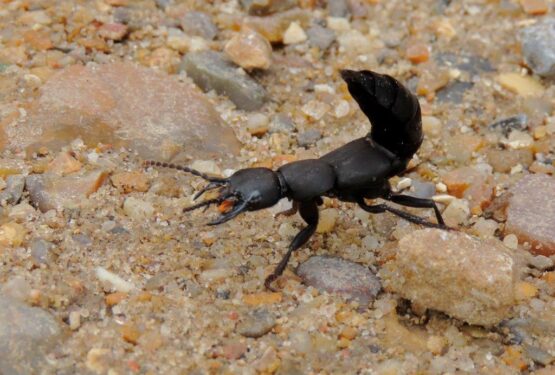 Many thanks to you all for attending, hope that you enjoyed the morning and that you will be able to join us on another exploration of  nature before too long.