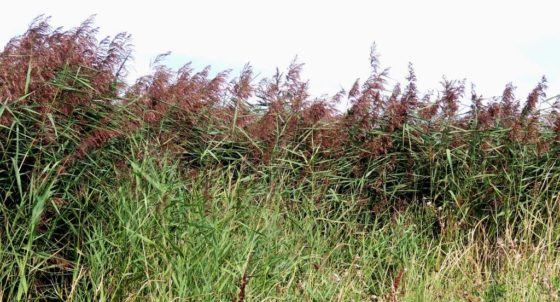 Ferry Marsh is part of the Colne Local Nature Reserve, owned and managed by Colchester Borough Council, and this was our destination for September. In days of yore, part of this area was a grazing marsh, but more recently, since the housing development on West Quay, it has been set aside for nature conservation purposes. Rainwater falling on the roofs of the new properties is directed onto the marsh;  this, together with springs and tributary streams, keeps it damp and the channels full of water for their famous occupants, the Water Voles. The idea is that the sluice into the River Colne allows excess water to drain out at low tide, but as locals know this system has been prone to go awry and for the past couple of years the whole marsh has become more or less permanently flooded. How did this affect the wildlife? Well this is the question we were interested in. 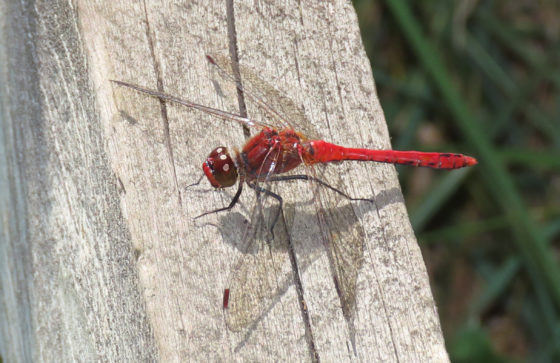 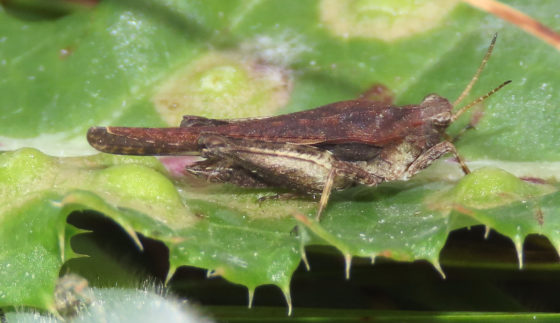 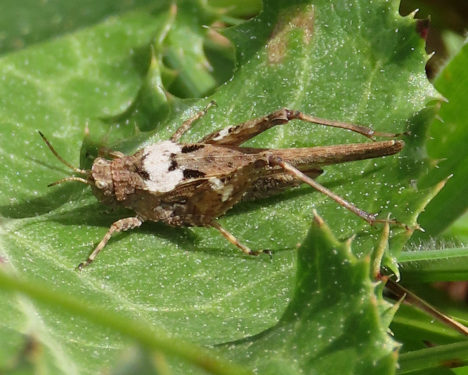 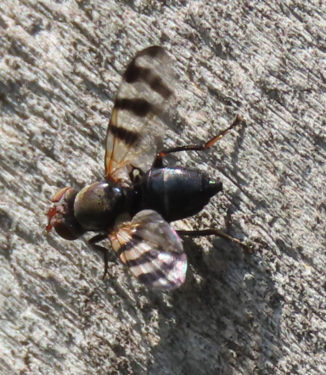 Although the weather forecast had been good, hey ho, the wind and the rain plagued us in the morning session, with a resultant meagre selection of insects. The sunshine in the afternoon warmed up some additional species, including both Ruddy and Common Darter dragonflies, two colour-forms of the tiny Slender Groundhopper and a picture-winged fly Ceroxys urticae. 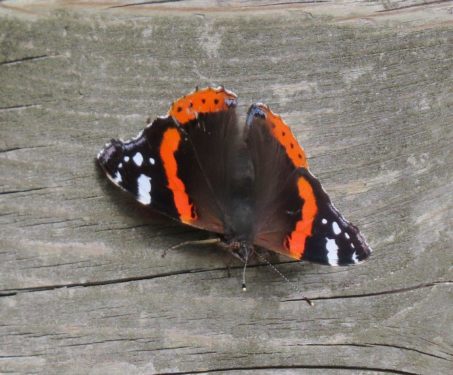 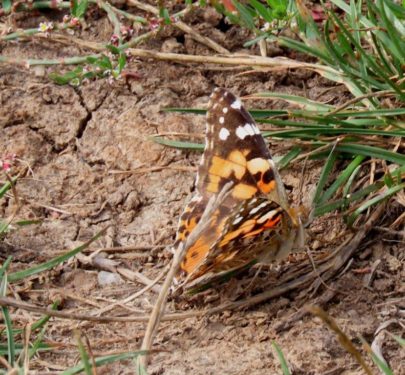 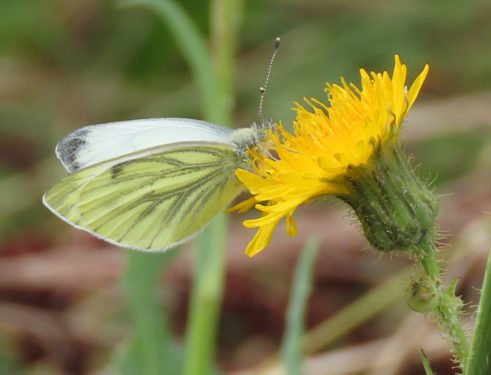 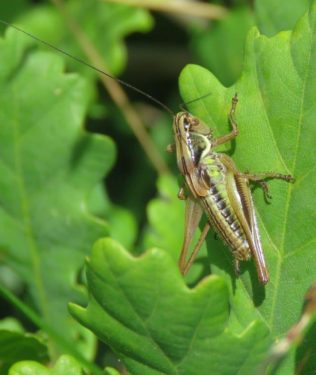 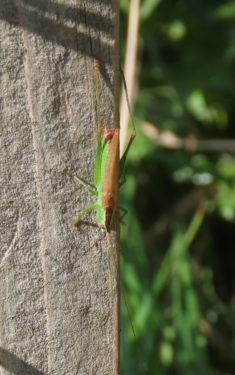 But the morning session was not without its entomological interest, and we were treated to four butterfly species, including a splendid fresh-out-of-the-pupa Red Admiral, as well as Green-veined White, Small White and Painted Lady, plus some wonderfully-named Long-winged Coneheads and a stunning Roesel’s Bush-cricket. 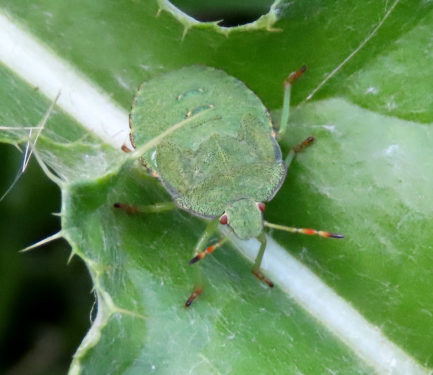 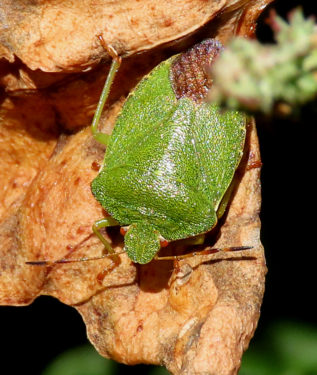 Having been totally inundated for some considerable time, most of what is currently supported by the marsh has only been present since the water-level subsided. This is obviously true for most of the plants, but also for creatures such as the Green Shield-bug, which we saw in various stages of development. An adult earlier this year would have flown in and laid eggs on a suitable food plant. The subsequent baby bugs ( known as instars), unable to fly, gradually munched their way through the relevant herbage, shedding their skins up to five times, until they reach adulthood and only then acquired wings, and, as Chris would say, ‘ naughty bits’. 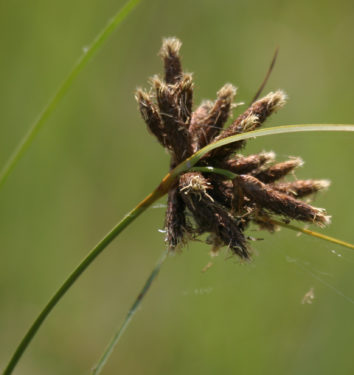 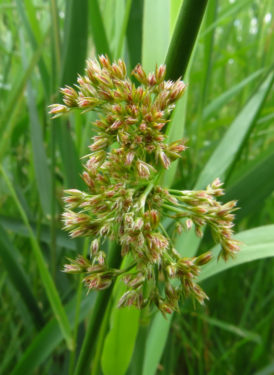 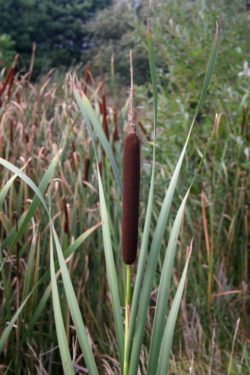 Talking of sayings, you may know the phrase ‘Sedges have edges and Rushes are round ‘. This was demonstrated to be true whilst examining the plant life. Confusion is only just round the corner, though, as the Club-rush is actually a sedge, whilst what we think of as a Bulrush, is not a rush at all, nor a Reed, but a Reedmace. The joy of our inaccurate English names! 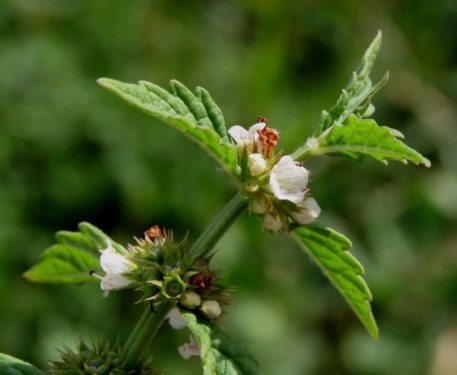 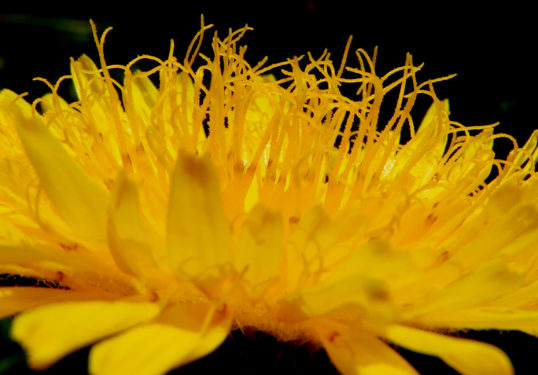 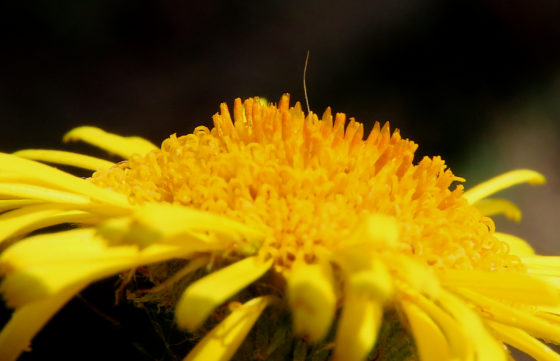 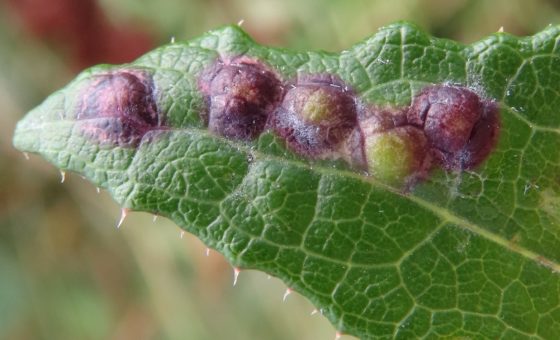 Whilst the beautiful Common Reed takes pride of place, both visually and aurally, at present, we also discussed some of the many other plants which have colonised, including  Gipsywort and several species of yellow ‘composites’ like Prickly Ox-tongue, Prickly Lettuce, Fleabane and Sow-thistle (some of which were covered in this glorious purple blister-gall, caused by a gall-midge Cystiphora sonchi). 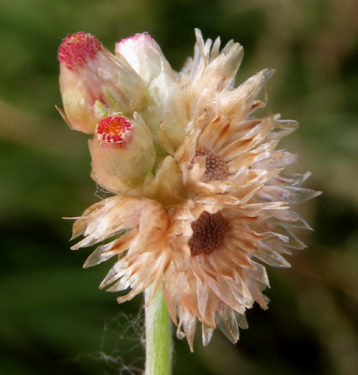 A surprising find was a single plant of the rare Jersey Cudweed, in a very different habitat to the cracks in the paving slabs on West Quay which it colonised five or so years ago. As we saw at the end of the walks, it flourishes there and seems not to be met with a barrage of glyphosate – do go and admire it if you haven’t already. 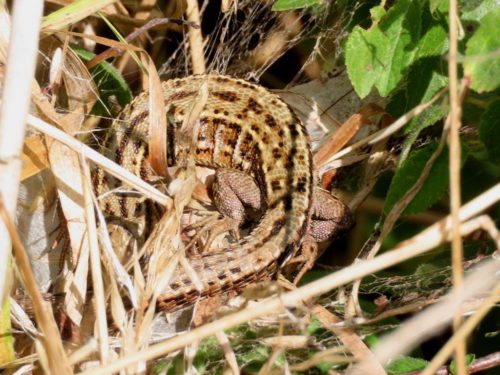 Unfortunately, no one spotted a Water Vole, though we understand they are doing well, and were able to survive the flooding due to the foresight of Darren Tansley and those who constructed the water channels and built a high bank in between them, which provided a refuge. The Spotting Award this month must go to one of our afternoon group, who incredibly saw a Common Lizard basking in the sun, not on the ground as you might expect, but nestled a metre or so up in a hedge!

As always, thanks to you all who joined us.