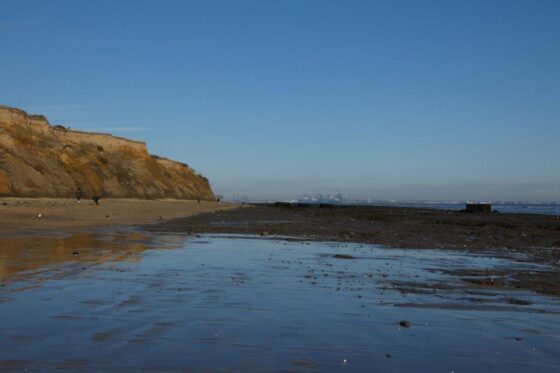 Having Walton-on-the-Naze on our doorstep is surely one of the delights of living in our part of Essex. And delightful it surely was on our Fossils and Birds walk on the coldest day of the year – sub-zero temperatures but in sparkling sunshine, we could see for miles out to sea, the still air  punctuated by only the lapping of the waves and the burbling of the Brent Geese one to another. 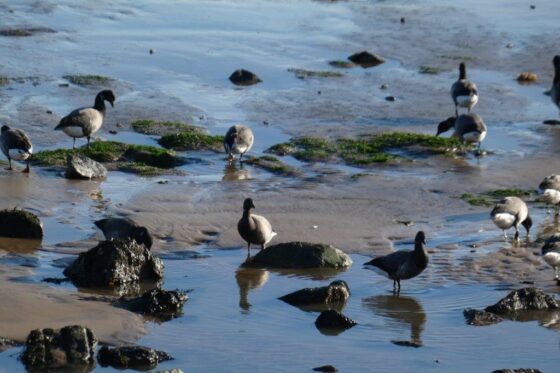 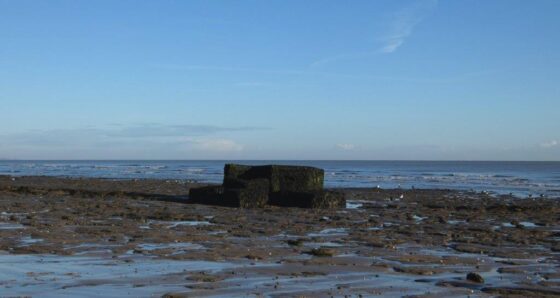 Standing on the beach looking at the cliffs, you really are looking back many millions of years in time. The whole area, a Site of Special Scientific Interest, is one of the finest geological sites in Britain, comprising layers of London Clay, topped by Red Crag. 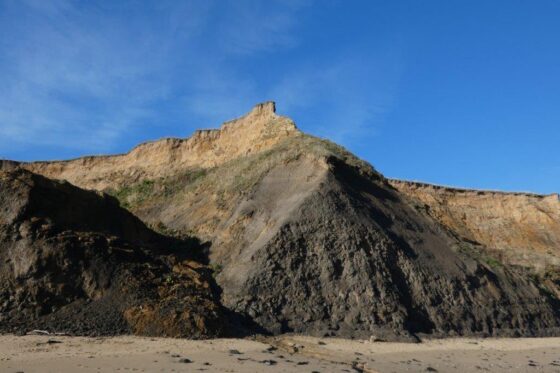 The stunning redness of the Crag is due to oxidisation of the sand and shell layer laid down over 3 million years ago when Walton was, as now, at the edge of the sea, just prior to it being engulfed in the turmoil of the last Ice Age. Fossils of many kinds and shell debris can be readily be found on the beach, most stained an attractive red colour, distinguishing them from otherwise-identical modern shells. 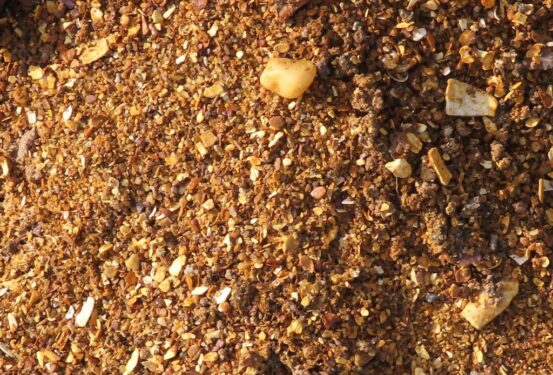 A combination of the seeping of rainwater downwards, lubricating the clay surface, and storm wave pressures makes the whole area prone to landslips and substantial coastal erosion, which although exciting for geologists and fossil-hunters, nevertheless is extremely worrying for those with buildings atop the cliffs! One vulnerable structure is of course the famous Naze Tower, a 300 year old leaning landmark, built by Trinity House for navigational purposes and today a popular art-gallery and tea room. 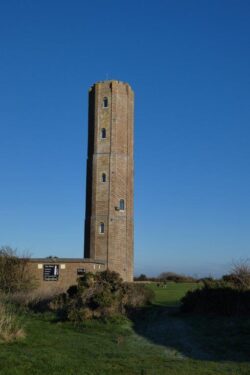 Some years ago a local dispute raged as to what to do – completely surround the whole Naze with a sea defence?  Extremely expensive and would prevent geological discovery and the ‘production’ of sand which feeds our local seaside resorts. Or let the whole area eventually fall into the sea? A compromise was sought and about ten years ago an additional 170 metres of defence was built. Now known as the Crag Walk, this allows a safe walkway, and provides a chance to study the cliffs at close quarters, whilst learning about the geology and wildlife from interpretation boards. It also protects the area immediately below the tower. 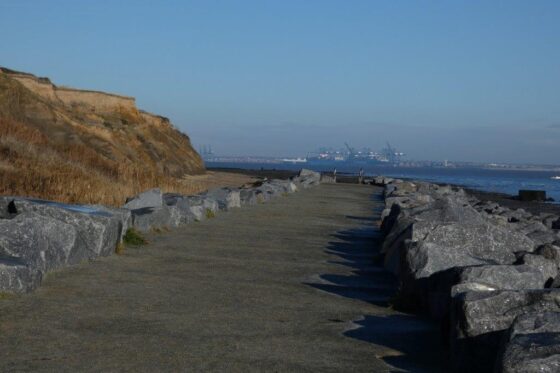 And so to our beachcombing….many delights awaited the patient explorer, including a shark’s tooth spotted by Chris – probably 50 million year old and looking in pretty good nick! (the tooth that is!), from an inhabitant of the subtropical London Clay lagoon which then covered most of what is now Essex.

‘Boring piddocks’ Chris was heard to exclaim at one point….to whom or what was he referring? Turns out Piddocks, also known as Angels’ Wings, are attractive shells which bore vertically in the soft London Clay, making perfectly round holes as they do so. Equally modern are the Slipper Limpets accidentally introduced to our waters a century ago. 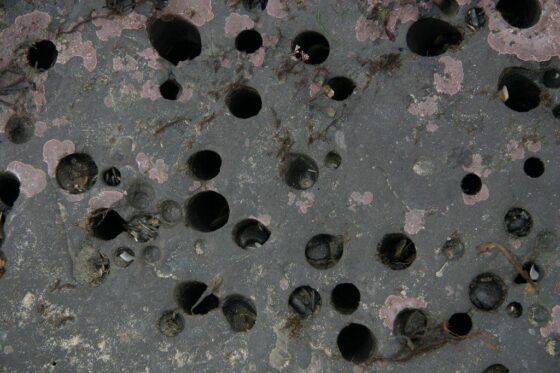 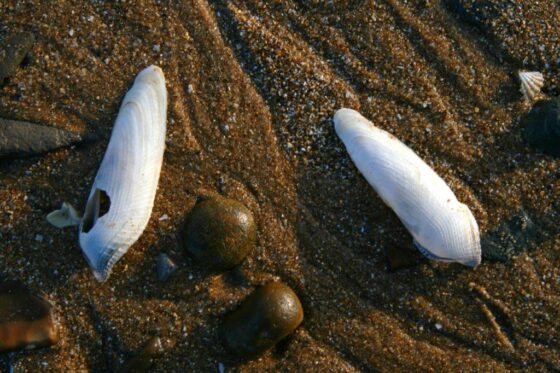 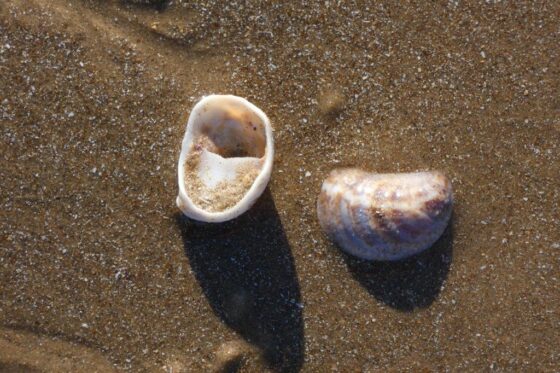 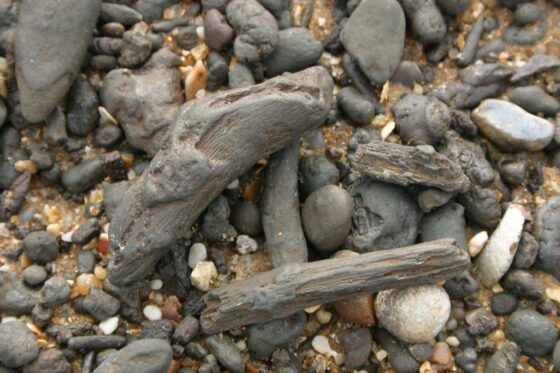 The left-hand coiling whelks Neptunia contraria are interesting as most gastropods coil in a dextral way; these left-handers from the warmer Red Crag seas can be dated at over two million year old. It’s hard to get your head round numbers like this! 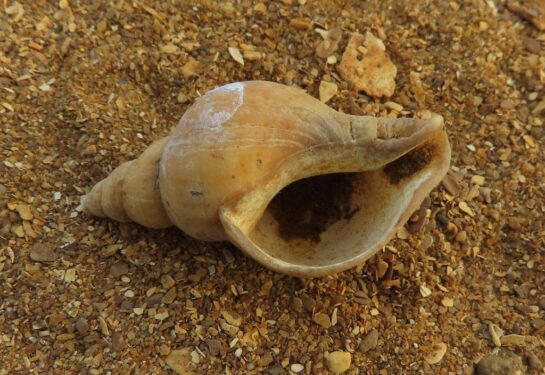 Although quite slippery on the London Clay platform, areas of sand became more accessible as the tide receded and we were particularly struck by the beautiful dendritic drainage tree-shapes in the sand. 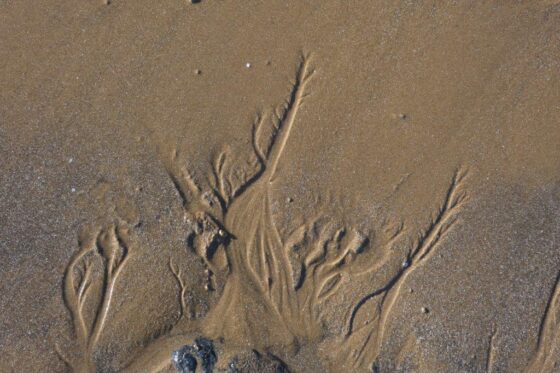 In addition to the wonderful beach treasures, we were able to see and hear many birds who make that area their home…the ubiquitous Brent Geese, as well as  Herring and Black-headed Gulls. In addition entertaining us running up and down the beach were several Turnstones, Grey Plovers, Curlews and Sanderlings. On the cliffs, Rock Pipit and Robin, their singing suggesting they were migrants defending their winter territories, and overhead several small flocks of Siskins, also migrants, flew northwards. 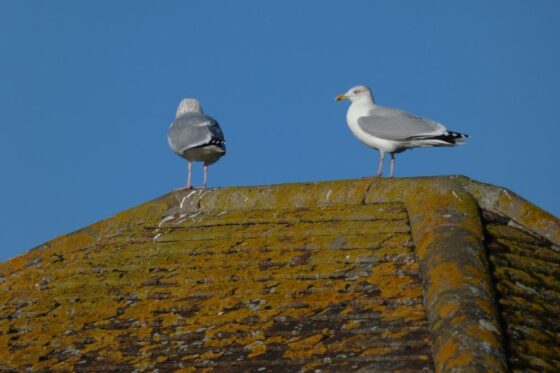 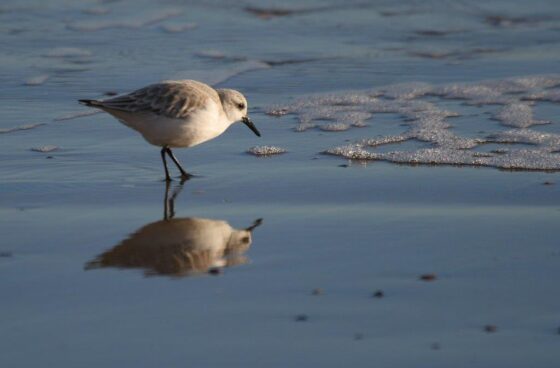 A very enjoyable end to our 2021 season – thank you all. Fingers crossed we can go ahead with our 2022 programme as planned, as #WildWivenhoe Bug & Botany walks are rebranded as simply #WildEssex: we try to do the lot!