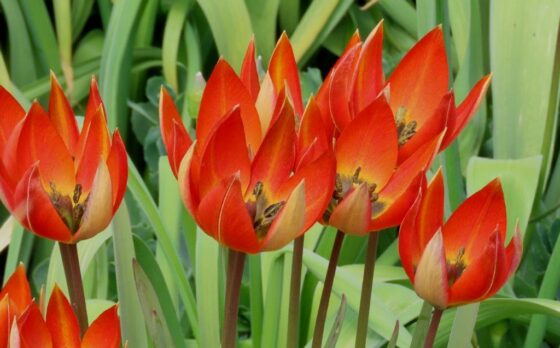 Since the mini-heatwave in March that fired the starting gun for Spring, April has gone downhill, or at best been treading water. Persistent, piercing, chilly north-easterly winds have kept temperatures well down, despite some lovely sunny days, and the nights have brought more frosts than the whole of the rest of the winter put together. And to cap it all, barely a drop of rain.

The plants have told the story of those weather stresses. Out in the surrounding countryside, Blackthorn peaked three or four weeks after its normal time, although confusingly, Bluebells started to flower a month early, although the cold has put them into suspended animation ever since. In the garden, the results have been equally mixed, winter colliding with spring while edging towards summer…

And the same is true of the insects in the garden. Until mid-month all butterflies were hibernators, especially Peacocks and Brimstones. But at last the new season’s adults have started to emerge, with Green-veined Whites and Orange Tips mixing with the first of the Speckled Woods in the dappled shade: 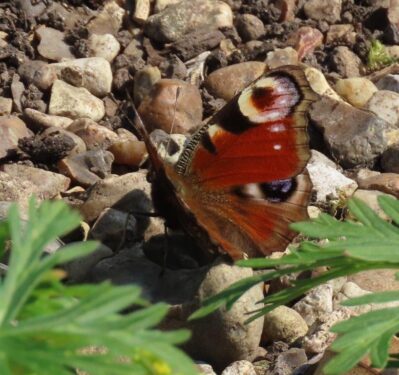 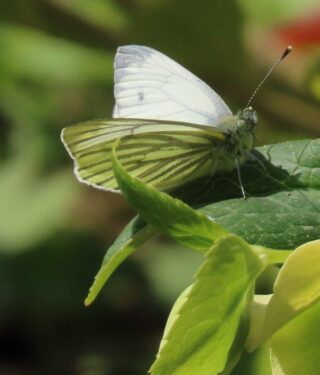 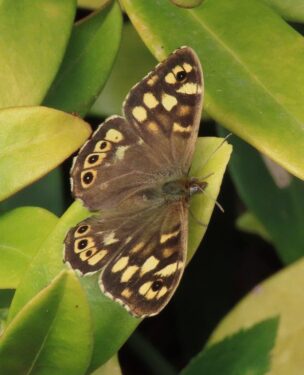 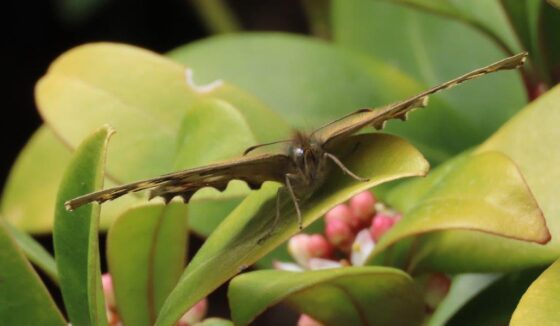 In sheltered spots out of the wind, and when the sun is out, bees are starting to emerge along with hoverflies, and bugs and other creatures are there to be found basking. 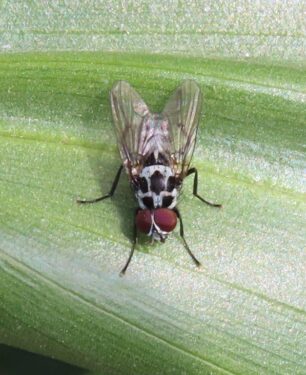 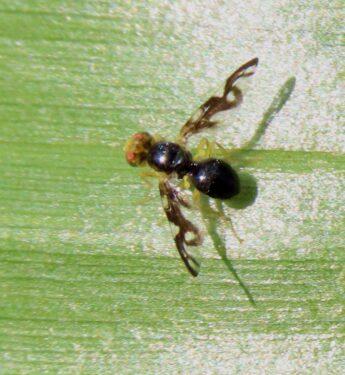 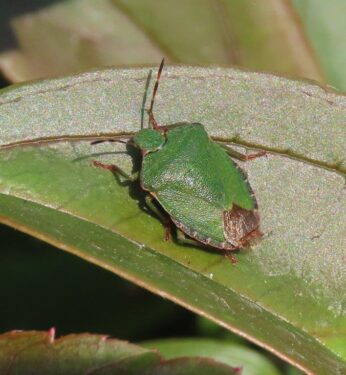 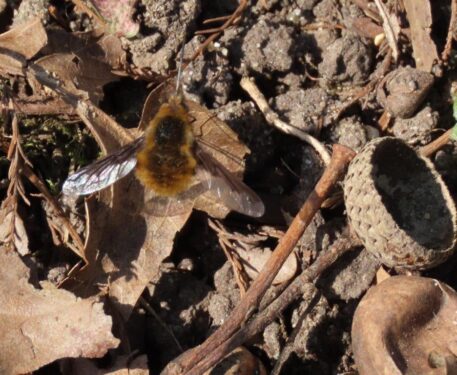 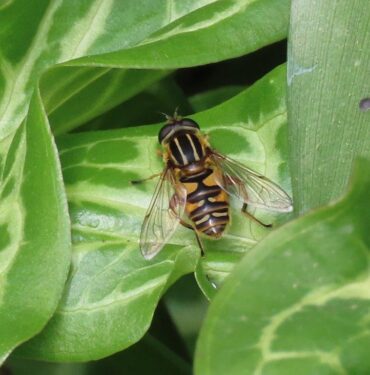 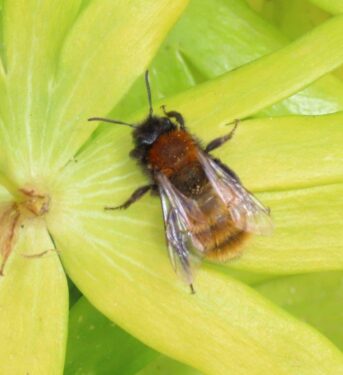 But the real insect action has been around those plants which best provide what insects want: nectar and pollen. In March it was Scilla bifolia, while in mid-April Skimmia ‘Kew Green’ took over the baton. Among the bees and hoverflies, there were a couple of scarce flies, the Spring Bee-grabber (just a couple of previous north Essex records) and the bristly moth parasite Tachina lurida, with only four previous Essex records. 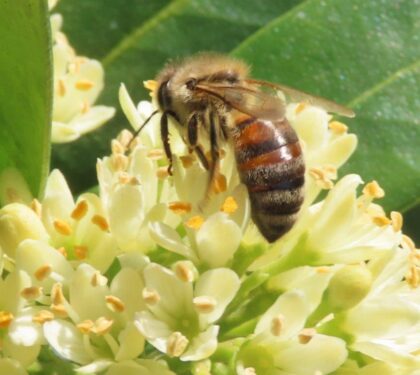 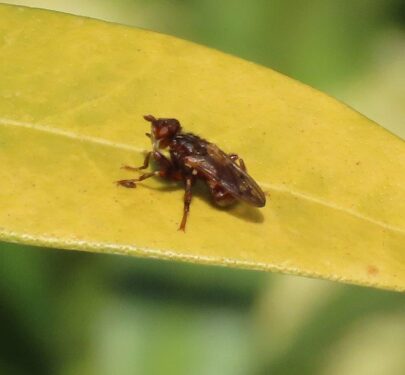 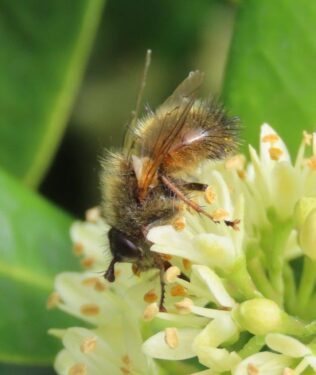 The Skimmia is starting to fade now, so what will take over? Certainly Euphorbia wulfenii is attracting flies, and both Cherry-laurel and Thermopsis are attracting the bumblebees. 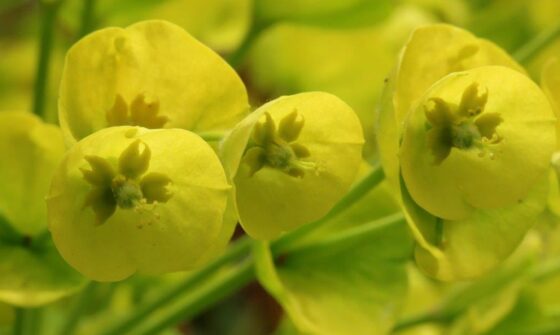 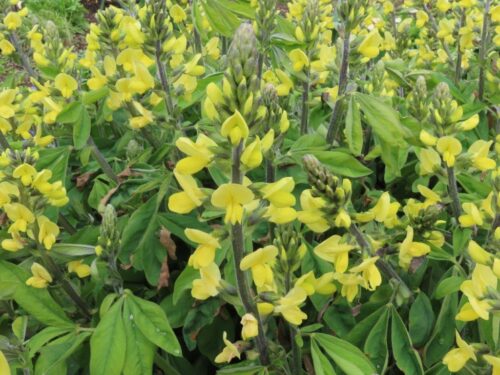 By the end of the month, having been held back for so long, the dam-burst of Summer is hanging in the air. All it will take is the wind direction to reverse, night-time temperatures to rise and we will be cascaded through the riot of Spring, probably faster than any of us would like. If anyone is thinking of visiting for a welcome taste of the early season, best do it soon!

A couple of further highlights are perhaps more by accident than design. Where mowing is restricted by trees and obstructions, Daisies and Dandelions are showing through, a natural complement to the insects’ garden restaurant. Wouldn’t it be good if  ‘No Mow May’ could find a place in the garden regime? Not perhaps on the main lawns , but maybe in the car park or on the verges of the driveway: every little helps our beleaguered pollinator force. 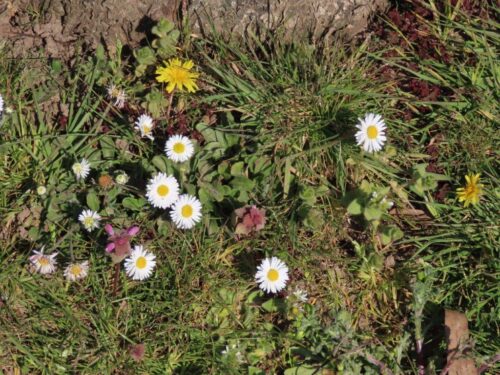 And then there’s the borders that are becoming infiltrated with one of our most charismatic little ancient woodland plants, Town-hall-clock. Some might say ‘infested’, but I would say ‘skeined with a graceful filigree of unassuming, green-flowered delight’. Who cannot love a plant whose scientific name ‘Adoxa‘ translates from Greek as ‘without glory’; whose clock-face flowers have five petals each, whereas the one pointing skyward has (usually) just four; a plant whose relationships seem so obscure it was until recently considered unique, the only member of its family in the whole world? And which bizarrely, following genetic sequencing has been shown to share a family with Elders and Viburnums! 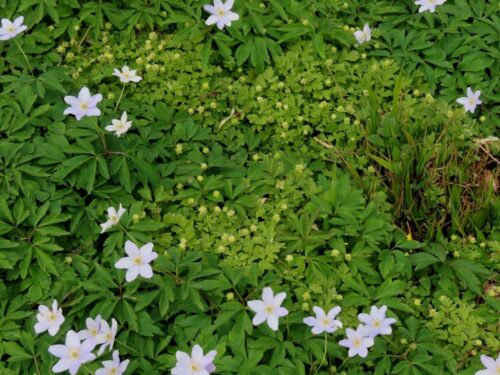 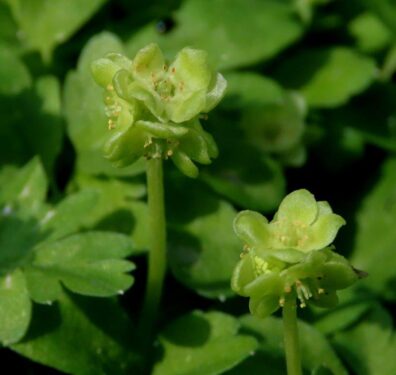 So spring may not yet have fully spring but the garden is already full of wild interest, And even on the coldest days, there are always the multi-species lichenscapes on the trees, ever-present whatever the weather! 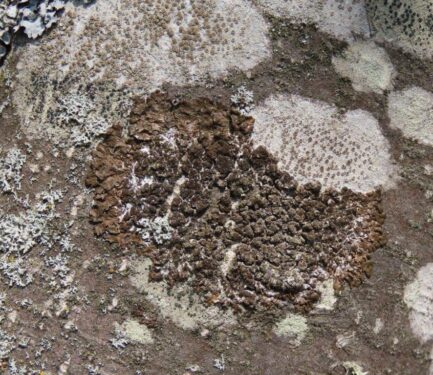 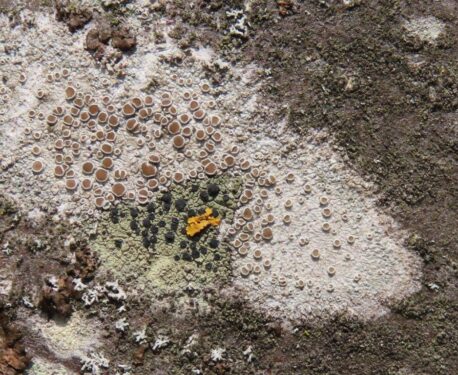 As always, the Beth Chatto Gardens are brimming with life. While the weather, and over the longer term climate, are going awry, the importance of gardens like this in maintaining our countryside’s wildlife cannot be overstated.

To visit, unless you are a Friend of the garden, online prebooking is essential. Please visit https://www.bethchatto.co.uk/garden-nursery/planning-a-visit.htm